As much as 20% of the total insurance-linked securities (ILS) and third-party reinsurance capital that was deployed for the 2018 underwriting year remains trapped in funds and other structures following the impacts of losses, according to A.M. Best.

This is expected to be a key driver for profitability moving forwards through the year, perhaps providing the stimulus for rate increases at the upcoming April, June and July renewals.

A.M. Best highlights the importance of freeing this capital up for ILS funds as they trade into 2019 and beyond in a recent report.

Of course, many of the largest ILS funds have raised capital to replace at least some of their trapped collateral for use at the key January 2019 renewals.

But the rating agency estimates that still around 20% remains trapped and unavailable for underwriting, meaning the deployable capital of the ILS market fell considerably at 1/1.

ILS capacity was the main driver of reinsurance capital growth in 2018 and looking ahead it may continue to be, as A.M. Best says that traditional reinsurance capital is likely to remain flat, thanks to the impact of 2018 losses and unrealised capital losses in the second-half of the year.

Taking into account the trapping of collateral, which A.M. Best sees as a key factor in calculating its BCAR scores for re/insurers as the collateral quality and terms can materially benefit re/insurers that purchase third-party backed protection from unrated structures, the rating agencies assessment of industry capital at year-end 2018 shows a slight dip. 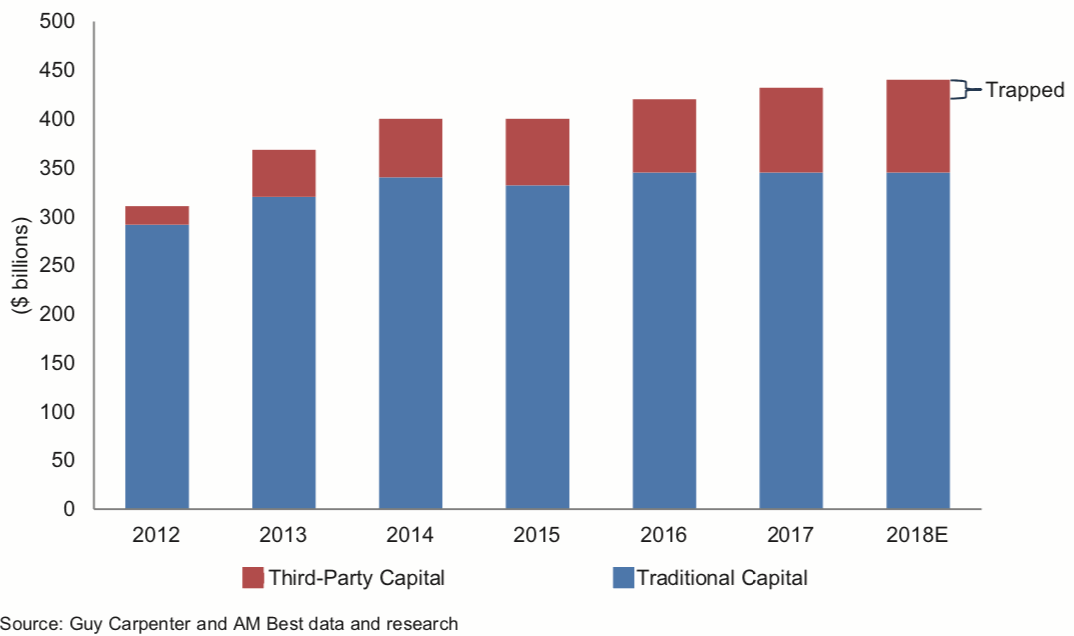 So thanks to the trapping of ILS collateral the reinsurance market entered the January 2019 renewals a little shorter on capacity than had been seen in the prior year, which alongside slightly higher demand in places should perhaps have resulted in broader pricing increases than were seen.

A.M. Best said that the renewals may suggest that third-party capital investors have become more concerned about returns overall, which could slow the resumption of ILS market growth somewhat.

But the rating agency doesn’t expect the appetite for ILS investments to be diminished in any way, saying that, “investors will continue to invest in third-party capital and that the alignment between third-party and traditional capital will endure, guaranteeing an abundance of capacity for the (re)insurance segment.”

The investor attractions to ILS of diversification and lack of correlation remain and A.M. Best also highlights that over the longer-term ILS as an asset class remains profitable as well, delivering annualised aggregate returns of roughly 4.5% over the 12 years since 2006.

But still, A.M. Best believes that there will be a decline in ILS capacity overall in 2019, “owing to trapped capital, the hesitation of some to double down, and the possibility that in a rising interest rate environment investors will be able to find other investments—with more stable returns—in which to invest their capital.”

However, the 20% of ILS capital still trapped is not necessarily completely lost by any means, so there will be come capital to return to ILS funds and structures once the final bill from 2017 and 2018 loss events are calculated, which may also stay in their strategies for future deployment.

It’s also important to note the growth in third-party capital at major reinsurers, which continues apace and has accelerated into 2019 at some players, as well as the entry of new investment managers at 1/1 and the growth in AuM of some ILS players that took advantage of retro opportunities.

It’s not at all clear-cut whether the ILS market will decline through 2019, remain roughly static, or perhaps enter 2020 even larger, at this stage.

All three outcomes seem possible, depending on availability of attractive underwriting opportunities, whether ILS players can reduce the cost of accessing risk even further, and how much re/insurers continue to expand their reliance on efficient capital markets backed capacity.