The amount of insurance-linked securities (ILS) capital and collateral that is still trapped after recent catastrophe loss years has fallen only slightly, as some cat bond collateral in particular was released but fresh collateralised reinsurance and retro collateral was trapped by 2019 loss events.

At the same time, overall global reinsurance capital is seen to have increased slightly, with traditional sources responding to demand for coverage and rising market premiums.

This is according to estimations made by Hyperion X, the data and technology focused unit of the global Hyperion Insurance Group that includes RKH Reinsurance Brokers.

Overall, the reinsurance sector’s capital position proved stable as the market moved into the end of year renewals, with capital sitting in excess of historical levels, given the risks assumed, Hyperion X said.

Notable is the fact that the sector’s premiums to surplus ratio has reached its highest level since 2015, the company highlighted.

While traditional reinsurance capital rose around 2% over the course of 2019, according to Hyperion X, combined alternative sources of capital rose only 1%, which is largely down to the freeing of some trapped capital and the realisation of actual losses, we suspect.

Trapped capital levels fell in the catastrophe bond market, as investors have realised more losses and some ceding company loss estimates have come down a little.

Meanwhile, in the collateralised reinsurance segment, there has been some additional collateral trapped following fresh catastrophe loss activity in 2019, as well as through adjustments to prior year loss events, while some other collateral has been freed too.

But overall the picture is one of slightly less ILS capital now trapped, as losses are realised and finalised, particularly within the cat bond space. 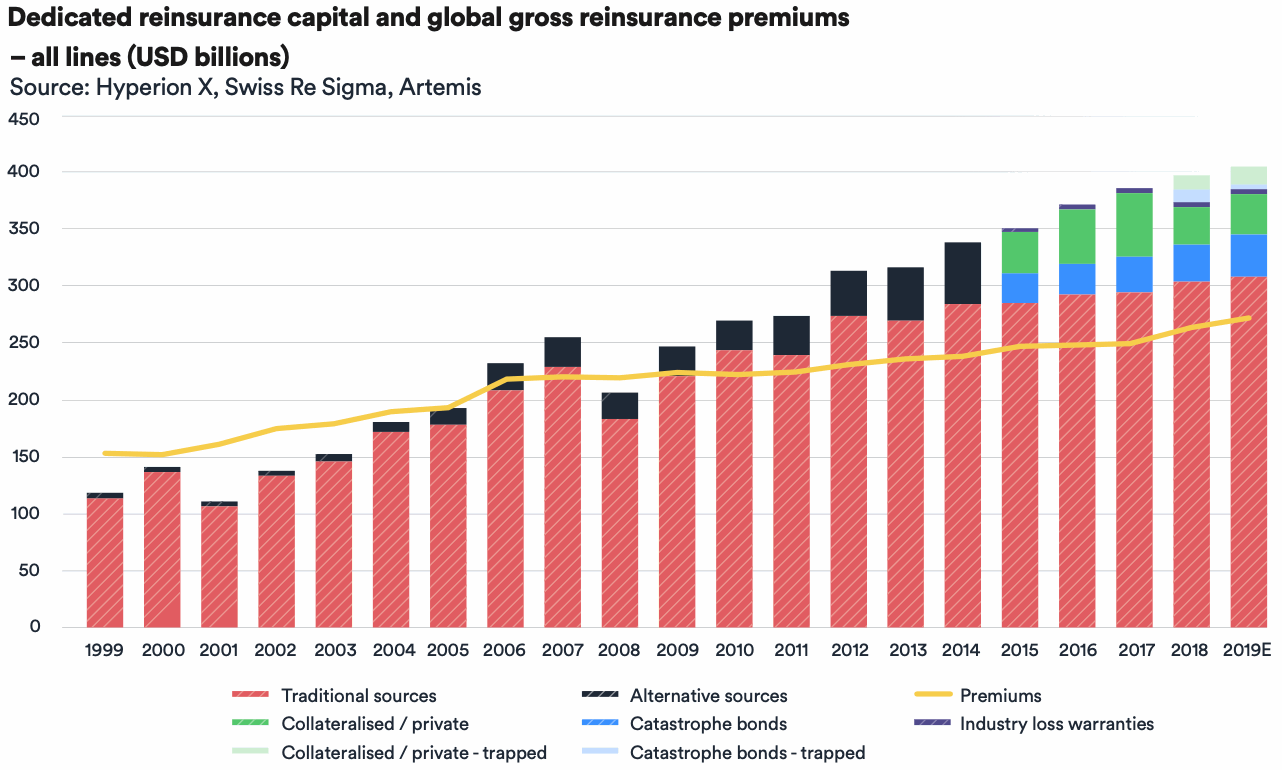 Hyperion X explained, “There was continued volatility at the margin with the amount of ‘trapped’ capital ultimately falling only slightly year-on-year. Capacity was freed in the catastrophe bond market but more capital was locked in collateralised structures.”

This trapping and release of capital is a key reason for the “considerable uncertainty” seen among ILS investors, which drove some of the supply constraints seen at the January 2020 reinsurance renewals, especially in areas such as aggregate retrocession.