The 2020 hurricane season – a story of storm frequency & rapid intensification

The 2020 Atlantic hurricane season comes to its official close today and two factors characterise what has been a record-setting season in many ways, the frequency of tropical storms and their rapid intensification, especially as they close in on landfall.

The 2020 Atlantic hurricane season saw a record number of named tropical storms form during the period, with 30 named storms taking use well into the Greek alphabet for names.

Of those record 30 named tropical storms, 13 intensified to become hurricanes, the second most hurricanes in a season on-record after 2005 which saw 15 hurricanes form.

Perhaps the most notable record for the global insurance, reinsurance and insurance-linked securities (ILS) industry though, is the fact that 12 tropical storms made landfall in the United States during the 2002 season, beating the previous record of 9 named storm landfalls set in 1916.

2020 saw the busiest September on record for named storm formation, a key month in the season, while May, July and November, all tied their records for numbers of named storms to form in the month.

Potentially even more notable for the insurance, reinsurance and ILS sector could have been the fact 6 hurricanes made landfall in the United States during the 2020 season.

However, the high frequency of named storms, hurricanes and also United States landfalls, has not resulted in the kind of losses that insurance and reinsurance markets might typically fear such an active season would produce.

While some regions have been devastated by the hurricanes in 2020, in particular Nicaragua and surrounding countries of Central America, as well as parts of coastal Louisiana in the United States, the impacts from the season have not been as severe as they could have been.

Location of landfalls has been key to this, with the most intense storms striking Central America, while the hurricanes striking the United States have largely come ashore in less populated, lower exposure and insured value regions.

The 2020 Atlantic hurricane season is estimated to have driven at least $40 billion of economic losses, but the insurance and reinsurance sector bill will be much lower it seems.

Insurance and reinsurance market loss estimates differ widely and there is a significant range of estimates, as ever.

Lately, estimates from industry sources are rising for some of the U.S. hurricanes as well, in some cases suggesting some inflationary effects from the COVID-19 pandemic.

But it seems likely the 2020 Atlantic hurricane season could drive around $25 billion of U.S. insured losses, while the figure would be $30 billion or perhaps a little more if including all offshore energy market losses, NFIP public flood insurance losses and impacts in the Caribbean, Mexico and Central America as well.

Had some of the hurricanes that struck more sparsely populated areas, such as in western Louisiana, hit a metropolitan zone, or higher-value area, we could have been talking about much higher industry losses this year, with a significantly higher impact to insurance-linked securities (ILS) positions such as catastrophe bonds.

Insured loss estimates from risk modelling companies and industry participants, some including offshore and public losses, for the 12 landfalling storms that struck the United States in 2020 range as follows:

As we wrote earlier today, despite the frequency of named storms and hurricanes in 2020, the losses to the ILS market have not been particularly significant and one factor in this has been the gradual shift further away from aggregate reinsurance structures in some quarters.

While storm frequency is a key part of the story for the 2020 Atlantic hurricane season, the other key feature of the year has been rapid intensification, particularly close in to landfall.

Three hurricanes in 2020, Hanna, Laura and Zeta, all rapidly intensified before making landfall in the United States.

2020 has reportedly tied a record for the number of storms and hurricanes that rapidly intensified, with the most recent hurricane Iota becoming the 10th of the season to do so. 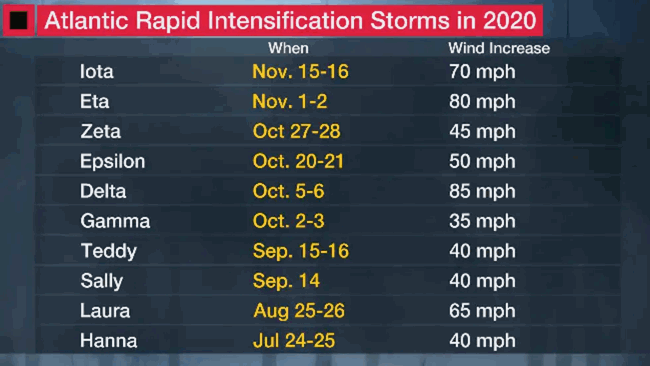 Rapid intensification of a tropical storm is generally considered to be a wind speed increase of 35 mph or more in 24 hours or less.

In 2020 we’ve seen a number of storms that have rapidly intensified at around double that rate, resulting in some hurricanes far outstripping the forecast models earlier predictions for intensity as they approach landfall.

A lot of research has predicted more rapid intensification of hurricanes due to climate changes, as well as increasing chances of intensification close into the United States shoreline. 2020 has played out this way, although the climate related influence is of course had to categorically prove or deny.

Intensification featured in another hurricane season record set in 2020, as hurricane Delta recorded the fastest intensification from a tropical depression to a Category 4 hurricane on-record, taking just more than 36 hours to do so.

As the 2020 Atlantic hurricane season comes to a close, the insurance, reinsurance and ILS industry will reflect back on a year that has thrown a significant number of storms at the United States and perhaps feel lucky that their losses aren’t considerable higher.