The influence of climate change is becoming more visible in the increasingly frequent occurrences of so-called secondary peril events, according to Swiss Re’s Group Chief Economist, who also warns of the potential for peak perils to follow a similar trend of rising loss costs.

As trends suggest a rising level of economic and insured impacts from events such as flooding, droughts and wildfires, the global reinsurance firm also warns that trends in rising loss-costs will also apply to peak catastrophe perils as well.

The reinsurance firm warns that the global industry may not be far off a USD 250 billion to USD 300 billion industry loss year, when it experiences a peak-loss inducing hurricane season and multiple secondary peril events in the same calendar period.

2020 provided plenty of warnings of this, not least in the record levels of US hurricane activity that occurred.

Had the record number of storms impacted more highly populated and urbanised regions and intensified further in some cases, the insurance and reinsurance industry could have been looking at a significantly larger bill for 2020.

As it is, Swiss Re estimates that 2020’s natural catastrophe and man-made losses caused a global insured loss of USD 89 billion, which is the fifth costliest year in the reinsurers sigma records.

So-called secondary peril events made up roughly 71% of natural catastrophe insured losses in 2020, largely coming from severe convective storms and wildfires in the US and Australia.

Jérôme Haegeli, Swiss Re Group Chief Economist explained how trends are shifting and the influence of climate change, “2020 will be remembered for the global health and economic crisis triggered by the COVID-19 pandemic. But while COVID-19 was a stress test for society and the economy, it has an expiry date – climate change does not. In fact, climate change is already becoming visible in more frequent occurrences of secondary perils, such as flash floods, droughts and forest fires.

“Natural disaster risks are increasing and climate change will significantly exacerbate them. This underlines the urgency to better protect our communities against catastrophic losses while dramatically reducing carbon emissions. Unless mitigating measures are taken, such as greening the global economic recovery, the cost to society will increase in the future.

“In many regions of the world, the need to close protection gaps persists for both primary and secondary peril exposures. Re/insurers can do more to help people, businesses and societies become more resilient.” 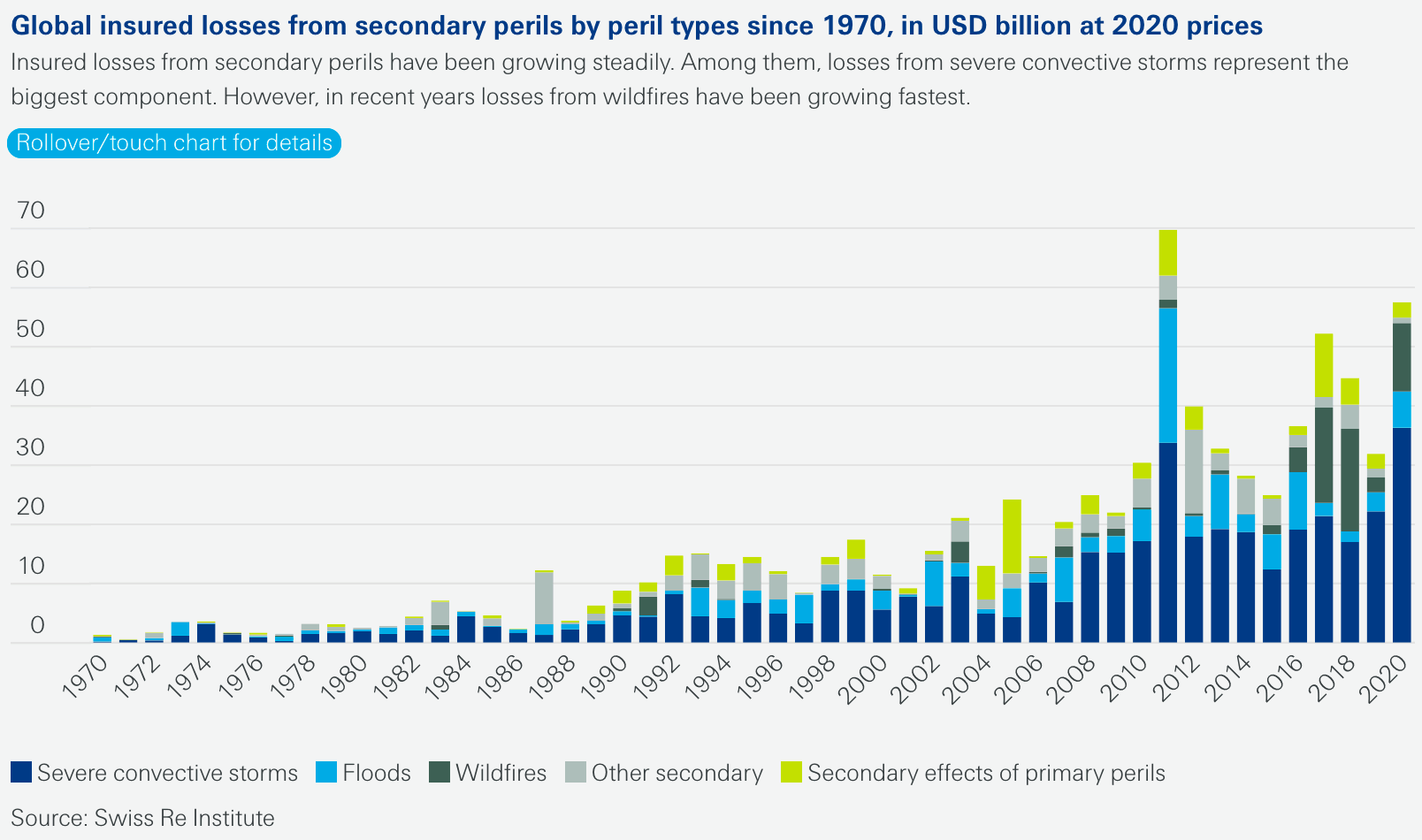 Martin Bertogg, Swiss Re’s Head of Cat Perils added, “We have seen an increase in losses from secondary perils in recent years, such as severe convective storms, floods and wildfires. The same upward loss trend for primary perils and 2020 serves as another reminder of their peak loss potential. The two peril types are affected by the same loss-driving risk trends, including population growth, increasing property values in exposed regions and the effects of climate change. This suggests that with climate change, future peak loss scenarios could also increase significantly.

“There were a record-breaking 30 named storms during hurricane season 2020 and a further record was set when 12 of those made landfall in the US. It cost the insurance industry USD 21 billion in claims. Yet, incredibly, we would regard that as somewhat of a lucky escape.

“Given the dynamic nature of risks, re/insurers’ risk models need to increasingly consider forward-looking risk trends, such as climate change, urbanisation and socio-economic inflation – rather than relying on historical data observations – when assessing the potential magnitude of losses.”

But it is the forecasts of potential peak-loss years that the insurance and reinsurance industry could experience that may concern some in the industry.

Swiss Re believes that on top of the rising losses from secondary perils, the same risk trends are also affecting primary perils, leading to a forecast for far higher loss years now being possible.

The data suggests that “future peak loss scenarios for both hurricane season and multiple secondary peril events could be as high as USD 250–300 billion, mainly due to population growth, value accumulation in highly exposed areas and climate change effects,” Swiss Re believes.

The reinsurance firm continued to explain, “The underlying factors influencing primary and secondary peril event outcomes are the same, including changing socio-economic developments and climate-change effects. Primary perils are well-monitored by the insurance industry, but secondary-peril risks less so. Risk assessment efforts need to rebalance to make secondary perils a priority.

“Given the dynamic nature of risks, forward- rather than backward-looking data analysis is paramount so as to not underestimate the scale of potential present-day and future losses. to this end, risk model build also needs to de-bias away from reliance on historical data observations, which may not be a good proxy for present-day conditions.”

The impacts to catastrophe bonds, other insurance-linked securities (ILS) structures and collateralized reinsurance or retrocession from a USD 250 billion or greater industry loss year would be significant, especially if it was largely driven by US hurricane risks.

The catastrophe bond and wider ILS market remains roughly 55% to 65% exposed to US wind risk, our latest estimate suggests, meaning that a significant loss year for that peril can drive major losses through the cat bond and ILS community.

However, it would drive an equally large loss through traditional reinsurance and retrocession markets as well, leading to a period of significant rate hardening in its wake.

Of course, this level of potential loss only drives home the importance that upfront underwriting rates are suitably set to cover expected loss costs in the first place.

The other question is how frequently such a significant loss year could be expected to occur. Swiss Re doesn’t give the return-period for its modelling that suggests a USD 250 billion plus industry loss year is possible.

It’s likely a year reasonably far into the tail, as far as models are concerned.

But given we’ve already experienced a year that created an equivalent of USD 120 billion of insured losses from just three hurricanes, Swiss Re’s estimate for 2005’s Katrina, Rita and Wilma, it’s entirely possible a year with say five major US hurricanes plus a heavy toll from secondary perils, could drive annual insured losses up towards these higher.