Swiss Re estimates global insured losses at $79bn for 2018

Global reinsurance firm Swiss Re has estimated that natural catastrophes and man-made disasters will cost the insurance industry around $79 billion in 2018, the fourth highest annual industry loss on its sigma records.

Of the $79 billion, Swiss Re estimates that natural catastrophes will drive $71 billion of the loss to insurance and reinsurance interests, with man-made disasters the other $8 billion.

Economic losses are estimated to be $155 billion, revealing a huge protection gap once again as roughly half of the catastrophe and man-made disaster burden goes uninsured.

However, Swiss Re does note that the fact over half of the losses were insured does go some way towards, “demonstrating again the significant contribution of the insurance sector to mitigating catastrophe risk.”

Natural catastrophes are estimated to have caused $146 billion of the economic losses, with man-made disasters the other $9 billion.

The $79 billion of global insured disaster losses is also higher than the 10 year average, with a number of smaller and mid-sized loss events impacting all regions this year, including regions with well-established insurance markets.

There is no single large event in 2018 that caused a significant impact, instead the regular occurrence of smaller to medium-sized catastrophe and severe weather losses have driven the bulk of the impact to insurance and reinsurance markets, Swiss Re notes.

“Like last year, the losses from the 2018 series of events highlight the increasing vulnerability of the ever-growing concentration of humans and property values on coastlines and in the urban-wildlife interface. The very presence of human and property assets in areas such as these means extreme weather conditions can quickly turn into catastrophe events in terms of losses inflicted,” the reinsurer explained.

The majority of the impacts and losses have been driven by second-half 2018 events, with the U.S. hurricanes, Japanese typhoons and flooding, as well as the California wildfires the major drivers of insurance industry losses.

The first half only drove $20 billion of losses, Swiss Re estimated earlier this year. 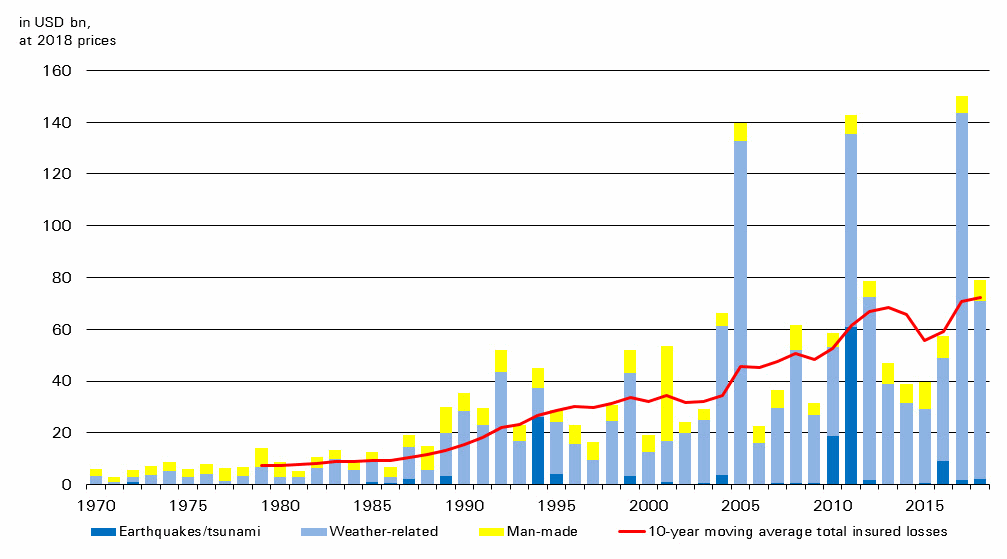