The National Hurricane Center (NHC) warns of a “prolonged period of hazardous weather” for much of Florida state as subtropical storm Nicole has formed northeast of the Bahamas and is expected to bear down on Florida’s east coast, with near hurricane force winds seen as a possibility and storm surge likely.

Subtropical storm Nicole could be a test for the close in intensification potential of a relatively late season storm, given the warm sea surface temperatures (SST’s) alongside Florida’s east coast at this time of year.

With subtropical characteristics, storm Nicole may find intensification hard, but it is set to become a very large area of potentially damaging winds and weather, while also having quite significant coastal flooding potential, as the slow moving storm could pile water up along Florida’s east coast through more than one tide cycle.

Right now, storm Nicole only has 45 mph sustained winds, but that is forecast to increase to 70 mph before it makes landfall on Florida’s eastern seaboard.

Right now, the landfall consensus seems to be for north of Palm Beach, perhaps the Port St Lucie area, but some forecast models also see storm Nicole tracking a little further south as well. The ECMWF model suggests something a little further south though, so the precise landfall location will remain uncertain over the next couple of days, it seems. 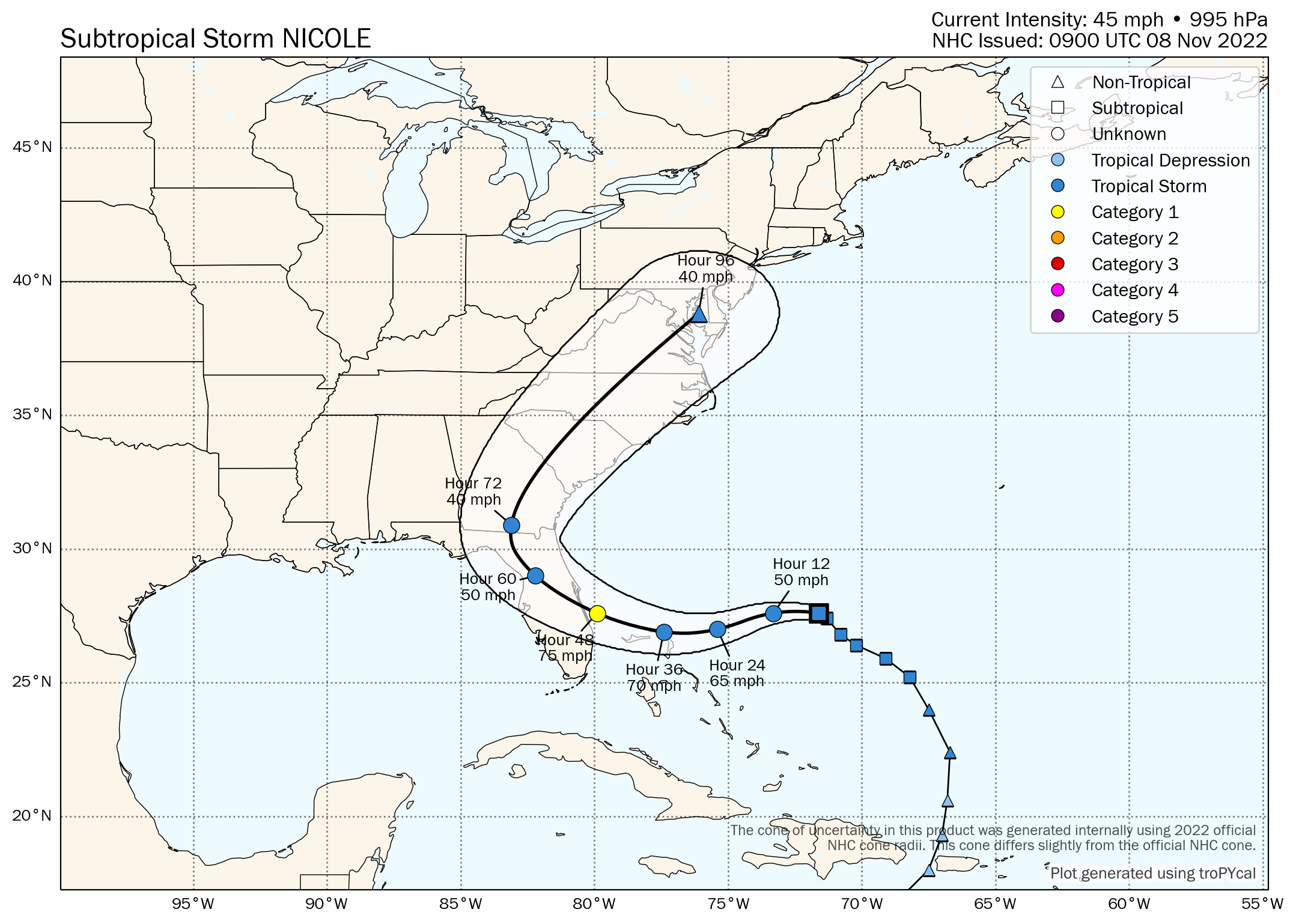 Given the significant size of storm Nicole, or at least that it is expected to grow too, the effects of the storm are likely to be felt very widely, and the slow moving nature of the storm means the effects will be felt for quite some time.

That will grow as Nicole moves over the very warm SST’s around the Bahamas and towards Florida’s east coast.

The NHC warns of a storm surge of 3 to 5 feet for the Bahamas, as well as tropical storm force winds and 6 inch rainfall totals for the islands.

It will be interesting to see how the storm surge warnings compare for Florida’s east coast, especially if Nicole coincides with a high tide, as it has the potential to be a relatively meaningful coastal flood event, meteorologists suggest.

Also, Nicole will affect a large part of Florida, so widespread severe weather impacts are to be anticipated.

Some meteorologists are suggesting a low category hurricane strength storm, with a small core of hurricane force winds, is possible before storm Nicole makes landfall, but more generally the surge up the coast could be significant and rainfall extremely heavy and widespread as the storm tracks through Florida and recurves towards the north.

Some are also saying that, due to its subtropical characteristics, Nicole could be more like a nor’easter, in how it could have the potential to drive water onto the coast, so surge is definitely something to watch for as forecasts get better with the coming runs.

A late season reminder that the tropics can continue to throw storm events in the direction of Florida’s peninsula even in November, something the insurance and reinsurance industry has become less used to in recent years.