Louisiana and the surrounding region faces a difficult few days as tropical storm Barry makes its final approach. The NHC said in its latest update that it still expects hurricane Barry by landfall in the coming hours, as the storm continues to intensify.

But it is the flooding threat that is the major concern, as a storm surge of up to 6 feet, plus as much as 25 inches of rainfall in isolated areas, is expected to flood the Mississippi and threaten to top levees in the region, possibly in New Orleans as well.

Flood gates have been closed in advance of storm Barry’s approach, as local agencies expect that rivers will crest at the highest levels seen since the 1920’s this weekend, thanks to tropical storm Barry’s rainfall and the surge being driven into them as well.

River levels are already high, after weeks of rainfall and flooding along the Mississippi and its tributaries.

With New Orleans largely lying below sea level and the levees at risk of being topped in some areas, should Barry reach its hurricane strength and then stall over the coast there is the potential for a significant flooding event to occur.

Right now the major concern is to lives, property and livelihoods though, as tropical storm Barry slowly approaches a landfall somewhere around the south-central coast of Louisiana later on Saturday.

With sustained winds of 65 mph, the NHC expects that we’ll see hurricane Barry by landfall, as further intensification is forecast for the storm. 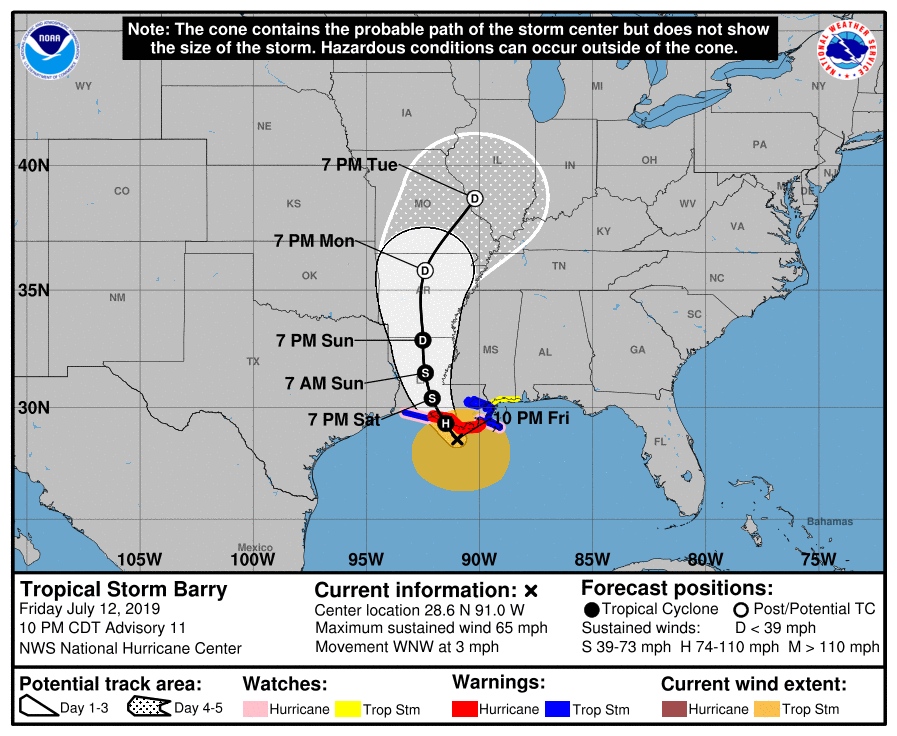 Following an initial landfall, storm Barry is expected to move generally northward through the Mississippi Valley through Sunday night.

The storm surge forecast for the coastal region is for heights of up to 6 foot, with more widely 3 to 5 foot of surge, that could cause coastal flooding to occur.

Storm surge can also back water up into rivers, which can mean they crest higher and for longer as well.

With the extreme levels of rainfall forecast that could be a real concern for some areas.

Tropical storm, or hurricane, Barry is expected to widely dump 10 to 20 inches over south-central and southeast Louisiana and southwest Mississippi, with isolated maximum amounts of 25 inches expected to be seen.

The Lower Mississippi Valley is expected to experience rain accumulations of 4 to 8 inches, with isolated maximum
amounts of 12 inches possible.

Analysts said that they do not expect tropical storm Barry to be a market moving event for the insurance and reinsurance sector. Partly because the NFIP will take such a large proportion of any flood loss, but also as similar storms at around a Category 1 hurricane strength only tend to cause insured losses of up to $1 billion or $2 billion maximum.

While insurers like State Farm, Allstate, Liberty Mutual, Progressive, USAA, Berkshire Hathaway, Travelers, Chubb and AIG are all among the top writers in the region tropical storm Barry is approaching, their flood exposure is much lower than their wind exposure.

These are largely insurers with plenty of reinsurance protection in place, some of which will be collateralized and ILS fund backed. But a storm like Barry may not be sufficiently large to trigger reinsurance program layers.

In some extreme modelled cases, quota shares would be the most likely source of any claims leakage into the reinsurance or ILS market it seems.

For the NFIP to trigger its reinsurance program a significant flood in the New Orleans area would likely be required. Not impossible given the forecasts for Barry, but most likely to occur only if Barry stalls after reaching hurricane strength on the coast, which could allow the storm to pick up further moisture from the Gulf of Mexico and dump it over New Orleans and Lake Ponchartrain.

The forecast for the crest at the Mississippi River has now been reduced to around 17 feet, which is lower than where the levee tops are (a roughly 20 feet crest). The NWS in New Orleans said the storm surge crest was lower than anticipated, which may have reduced some of the pressure on the city itself. However the crest following the rainfall, around Monday, is now the one to watch as a result.