Sub-tropical storm Alberto, the first named cyclone that has formed just in advance of the official start of the 2018 Atlantic hurricane season, is now approaching the Gulf Coast with sustained winds that have intensified to 65mph and is expected to make landfall in the Florida Panhandle. 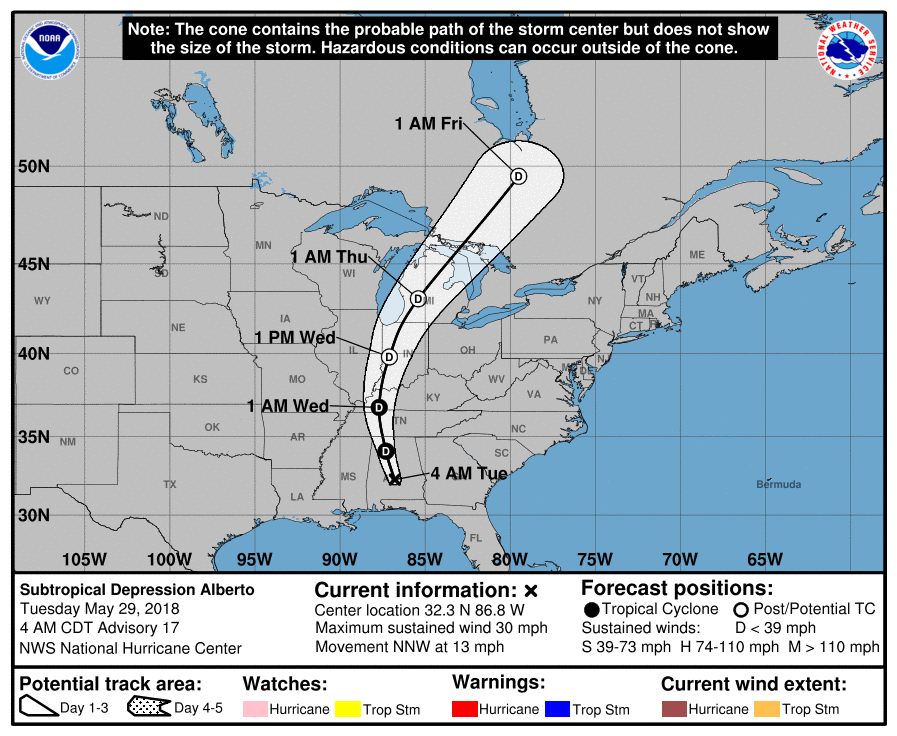 Alberto has retained its subtropical characteristics, but that doesn’t make the storm any less of a threat to property and those living in its path, with certain areas expected to receive torrential rainfall and a storm surge forecast for around the landfall area.

Alberto is approaching the Florida Panhandle coastline at 9mph and is expected to make landfall around 8am local time today.

Maximum sustained winds are at 65mph currently, with some higher gusts but little change in strength expected before landfall. Alberto’s minimum central pressure has fallen to 990mb and winds of 40mph extend outwards up to 115 miles from the center of the storm.

Impacts to the insurance and reinsurance industry are unlikely to be particularly significant, but thanks to the proliferation of aggregate reinsurance arrangements any tropical storm can be a contributor to increase the chances of losses later in the season.

The latest forecast model runs for wind speeds of Alberto can be seen below.

The Florida panhandle into much of Alabama and western Georgia…4 to 8 inches, isolated 12 inches.

The Florida Keys and south Florida…Additional 3 to 6 inches, isolated storm totals of 10 inches.

Rest of the Florida peninsula…1 to 4 inches.

Rest of the Southeast and Tennessee Valley into the lower mid Atlantic from Tennessee east through the Carolinas…2 to 6 inches.

Rains in Cuba could produce life-threatening flash floods and mudslides. Flooding and flash flooding are possible in the southeast United States, including Florida.

WIND: Tropical storm conditions will spread across the warning area throughout the day.

STORM SURGE: The combination of storm surge and the tide will cause normally dry areas near the coast to be flooded by rising waters moving inland from the shoreline. The water could reach the following heights above ground somewhere in the indicated areas if the peak surge occurs at the time of high tide…

The deepest water will occur along the immediate coast. Surge- related flooding depends on the relative timing of the surge and the tidal cycle, and can vary greatly over short distances. For information specific to your area, please see products issued by your local National Weather Service forecast office.

TORNADOES: A couple of brief tornadoes are possible today across much of Florida, central and southern Georgia, southern South Carolina, and southeastern Alabama.

SURF: Swells generated by Alberto will continue to affect the eastern and northern Gulf Coast through Tuesday. These swells are likely to cause life-threatening surf and rip current conditions.