The share price for the interval-style mutual insurance-linked securities (ILS) fund operated by Stone Ridge Asset Management has now declined by almost 5% since the impact of typhoon Hagibis in Japan.

The Stone Ridge Reinsurance Risk Premium Interval Fund, which invests across the spectrum of ILS and collateralised reinsurance assets, including numerous private quota shares and sidecars, has seen its share price fall steadily since the typhoon struck.

As we’re not privy to the regular valuation changes made within the Stone Ridge portfolio, except for from its quarterly reporting of portfolio holdings, we can only look to the pricing of the shares of the Interval ILS fund as a determinant of value and sentiment in the reinsurance risks it holds.

Looking at the current chart of the Stone Ridge Interval ILS fund over the last few months (seen below via Bloomberg, click the chart for a deeper look), it seems the steady decline has been largely triggered by typhoon Hagibis’ impacts, but may also in part be driven by the fact Hagibis came so soon after Faxai and also hurricane Dorian. 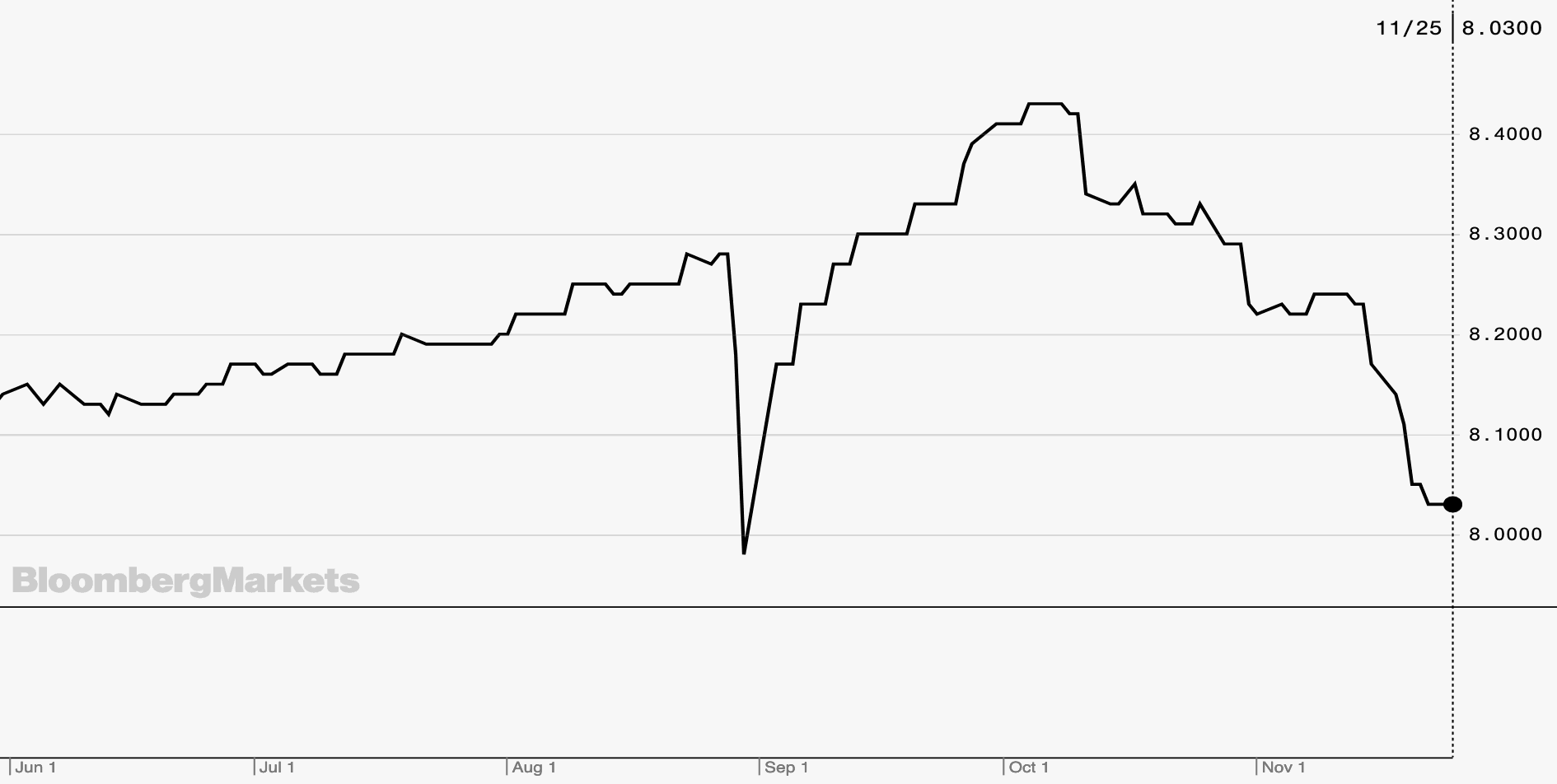 As the chart above shows, the Stone Ridge Reinsurance Risk Premium Interval Fund experienced a significant dip on the uncertainty related to hurricane Dorian at the end of August, but that was fully recovered and the price of the fund’s shares kept rising right through typhoon Faxai (which made landfall on September 9th).

The share price rose to as high as $8.43 by October 8th, then when Typhoon Hagibis was at its most threatening around October 10th it dipped to $8.34.

Typhoon Hagibis made landfall in Shizuoka Prefecture, Japan on October 12th, but the Stone Ridge managed Interval reinsurance and ILS fund did not react too much to the initial market view of impacts.

It’s only after a few weeks that the decline accelerated, with the largest dip in share price occurring around the 14th/15th November, which coincides with when exposed catastrophe bonds were marked down.

However, it’s possible that it is not just Hagibis that has caused this decline. Rather it may be that Hagibis triggered it, but it is the potential losses from the aggregated impacts of Dorian, Faxai and Hagibis that may be driving he share price further down still.

The shares bottomed at $8.03 at the end of trading yesterday, which is now almost 5% lower than when Hagibis hit and not far off as low as the shares fell on the fear Dorian would barrel directly into Florida at the end of August, which incidentally is the lowest the shares have ever been priced.

Of course, Stone Ridge Asset Management has a large and broadly exposed portfolio of catastrophe bonds, private insurance-linked securities (ILS) and reinsurance assets such as sidecars and quota shares which will see the managers funds taking hits from across the industry.

Many reinsurers are expecting to make recoveries on their retrocession and quota shares after the global catastrophe events of recent months and its seems that Stone Ridge’s flagship ILS fund is reflecting this in its valuation at this time.

There’s no guarantee the losses actually manifest at the level the valuation has been discounted at this time. But the impacts of trapped collateral could also drag on the fund’s returns for a time as well.

Given the two Japanese typhoons are unlikely to see significant clarity around cedant claims for some weeks yet, the fund’s share price may remain discounted for some time to come and we won’t know the full impacts for a number of quarters, as losses are realised or returned to the valuation of the Interval fund strategy.

Stone Ridge isn’t the only one to suffer a decline in value since typhoon Hagibis.

The Pioneer ILS Interval Fund is down approximately -1.5% since the storm struck Japan, while the ILW investment focused City National Rochdale Select Strategies Fund has continued to rise with no discernable dip, although its rise has slowed perhaps due to uncertainty over the potential for ILW market impacts from recent catastrophes once loss estimates are finalised.