Risk models are challenged when it comes to estimating losses from complex hurricane events, according to a study by reinsurance broker JLT Re, which finds that overall there is a trend towards significant loss underestimation and that accuracy suffers when events have unforseen on un-modelled) consequences.

The study looked at significant Atlantic hurricanes since 2004 and while it finds that accuracy has improved over time the risk modelling firms could help the market more with greater transparency around the underlying assumptions in their catastrophe risk models.

David Flandro, Global Head of Analytics at JLT Re, explained the studies findings, “This snapshot goes some way to explaining why the industry loss estimates provided by catastrophe modelling firms have led to general scepticism within the (re)insurance market over the last 15 years or so. At first glance, there is an overriding trend towards significant loss underestimation (the 2017 hurricanes apart), and it is not even immediately apparent that the range of loss estimates narrows during the lifespan of storms, or that they always become more accurate.” 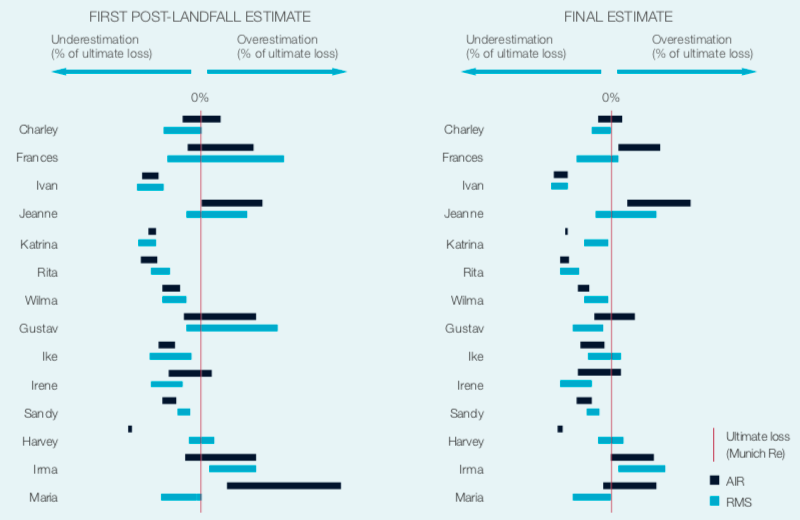 Evolution of Modelled Loss Estimates for Select US Hurricanes – 2004 to 2017 (Source: JLT Re, AIR, RMS, Munich Re). Note: for Harvey, AIR’s estimates (both ‘first post-landfall’ and ‘final’) do not include National Flood Insurance Program (NFIP) losses whilst RMS’s and Munch Re’s figures do.

When categorising hurricanes and their industry loss estimates into groups of storms that display similar characteristics, the JLT Re study found that historically risk models have performed relatively well for hurricane events that resulted in moderate losses, regardless of their landfall location.

This means that the more conventional hurricane events, ones that don’t result in super-cat type losses, are typically captured adequately in the main vendor catastrophe models.

But the risk models have not performed as well where a hurricane results in losses that go beyond just wind damage into areas of loss that are not as well modelled or understood.

Josh Darr, the Lead Meteorologist at JLT Re, explained, “This highlights the inherent difficulties modelling companies face in predicting losses for complex hurricane events that strike highly populated urban areas. These types of events often bring unforeseen consequences that cause losses to spiral.

“Results for hurricanes Katrina, Ike and Sandy show that catastrophe models have struggled to generate accurate loss ranges in such circumstances. In each case, un-modelled loss components accounted for a significant proportion (if not the majority) of the total cost. Vendor firms have in recent years drawn on important lessons learned during these events to recalibrate their models and incorporate a whole host of previously un-modelled perils.”

The major hurricanes of 2017, Harvey, Irma and Maria, provided a robust test for the latest generation of the main vendor hurricane risk models and while the accuracy of modelled loss estimates for these storms was mixed, JLT Re said that some results show encouraging signs given the complexity of these recent events.

Additionally, the reinsurance broker noted that the learnings and data collected during the 2017 hurricane season, along with technological advances, may help to improve risk model loss estimate accuracy in the future.

Keith Leung, Head of Catastrophe Modelling – International at JLT Re, concluded, “2017 reinforced the importance of understanding differences between estimates. Working with a range of modelled, post-event views can be valuable as long as the important drivers are clearly highlighted, particularly in situations where significant divergences occur. Catastrophe modelling firms can assist the market further here by better communicating the key drivers of loss within each estimate and providing more transparency around the various assumptions being applied. It is likewise incumbent on market participants to review rigorously, or even challenge, some of the more extreme loss estimates released by modelling firms.”

A copy of the full study can be downloaded over at the JLT Re website.