Rates-on-line for non-marine catastrophe retrocessional reinsurance are now up approximately 165% on their 2017 lows, analysts at Jefferies have pointed out using data reported by broking group Howden.

Rates and pricing for reinsurance as a whole are at record levels, according to the broker indices, but it is retrocession that has experienced the most significant gain in such a short period of time.

Jefferies analyst team highlighted the strong gains in retro pricing this morning, citing Howden’s index data, which you can see below. 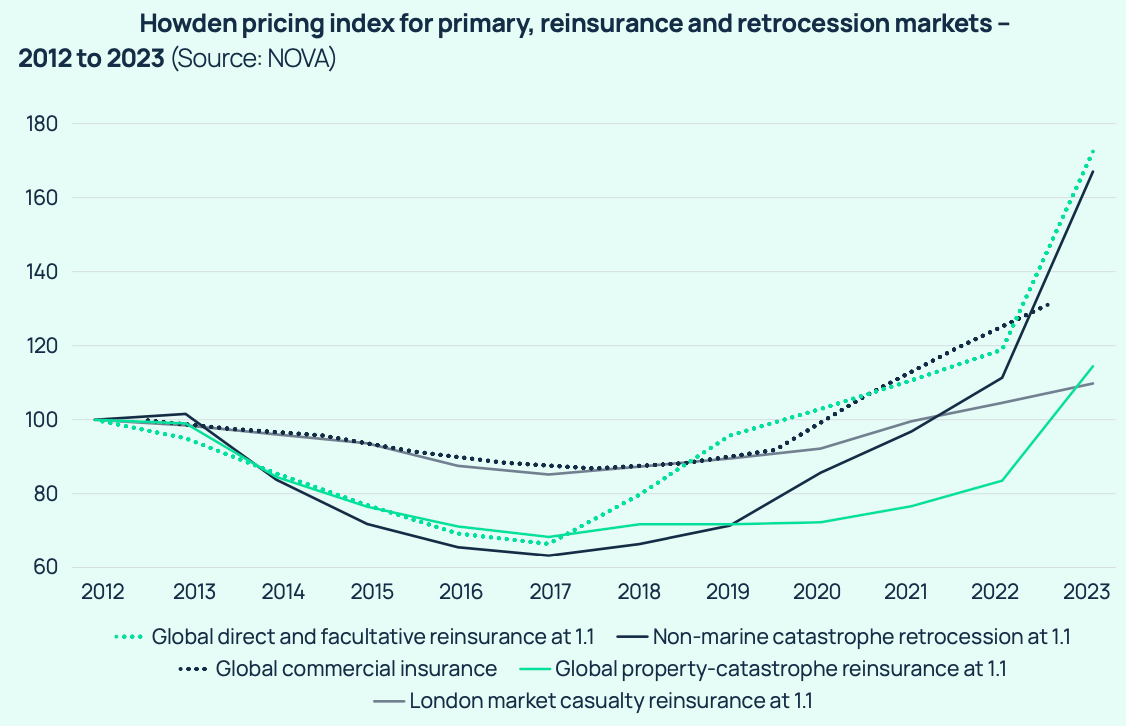 The Howden index data above shows that non-marine catastrophe retro rates-on-line had fallen to around 63 points in 2017, the low-point of the soft reinsurance market.

With the retro index having risen to around 167 points at the January 1st 2023 renewals, by the looks of the above image, that would equate to a cumulative 165% increase over the relatively short period.

This is relatively aligned to the price increases seen in the industry-loss warranty (ILW) market, which averaged over 150% from early 2017 to the fourth-quarter of 2022 according to our ILW price index data.

It’s also notable that the direct and facultative (D&F) reinsurance market index has increased by 160% since the 2017 soft market low as well, while for global property catastrophe reinsurance the increase at 1/1 2023 was biggest jump recorded since 1992, while that index is now up somewhere between 65% to 70% since the 2017 recent historical low and at a historical high (based on the index).

These are significant cumulative increases and imply much higher returns being possible, for allocating capital to retrocession and different forms of reinsurance.

Along with the significant improvements to terms, conditions and structural features seen over the last few years, portfolios of reinsurance and retrocession could be primed to deliver some of their best ever risk-adjusted returns, should loss activity prove relatively benign.

But thanks to those improvements, in terms, conditions and structures, even if loss activity is at the norm, portfolios of reinsurance and retrocession linked investments should also be able to deliver much better returns than at any other point in recent history.

There are wildcards, that could dent performance more than anticipated, of course, with inflation one of those, alongside climate risk, as drivers of potential uncertainty and loss amplification.

As we’ve explained before, the real test for 2023 and beyond is whether the reinsurance and retro market, including ILS funds and investors, can now sustain these elevated rate levels.

Or whether capital inflows, attracted by the much-improved return potential of allocations to reinsurance and retro assets, drive a return to softening prices.