It continues to surprise that at a time when reinsurance company returns are shrinking that they continue to spend more. Willis Re reports this morning that the efficiency of the industry is declining in real-terms, based on reinsurers underlying returns-on-equity (RoE’s) dropping to just 3.7%, while expense ratios continue to rise.

The impact of this is that, to a reinsurer, its capital and capacity is not becoming more efficient, which is what’s needed in a reinsurance market characterised by excess capital, competition from the capital markets and ILS funds, and new business models stimulated by InsurTech innovation.

Reinsurance companies actually seem to be going in the opposite direction, adding more costs and returning ever less to their shareholders, but of course we’re still in the relatively early stages of an evolution of the insurance and reinsurance sector, so this is actually a typical reaction.

In its latest reinsurance market report, Willis Re highlights the continued decline in profits of the sector, and while funds in the market (as defined by the Willis Reinsurance Index) continue to increase the profits extracted from it are shrinking as prices have continued to drop.

This was not offset by a much lower than average catastrophe loss load or the reserve releases that reinsurers have been boosting their profits with, hence combined ratios have risen anyway.

But it’s their returns where reinsurers are really suffering, with Willis Re reporting that the aggregate Return on Equity (RoE) for its Index fell to 4.6% at HY 2017, from 8.3% at HY 2016, with the decline mainly due to the inclusion of the adverse development cover underwritten by National Indemnity.

Excluding National Indemnity, the remaining Index constituents returned an aggregate RoE of 7.8% (down from 8.7% in 2016).

Willis Re always splits out companies where it can adjust their returns for prior year reserve releases and normalised catastrophe losses, and this subset of its Index saw their normalised RoE’s drop further to 3.7%, down from 4.5% in HY 2016.

At the same time as returns have declined again reinsurers are spending more, which is also not helping the combined ratios.

It seems unintuitive, but given reinsurers desire to remain profitable in the soft market and to set themselves up for future success as the reinsurance market evolves, spending more cash is inevitable right now.

Willis Re also explains that profitability of the sector has been reliant on reserve releases, but that the impact of these is shrinking as the reserves themselves shrink as well.

Reserve releases accounted for 26.2% of net income for the subset group of reinsurance companies at HY 2017, a significant reduction from 36% at HY 2016.

As the chart below from Willis Re’s report shows, the impact of prior year reserve development shrank considerably over the last year. 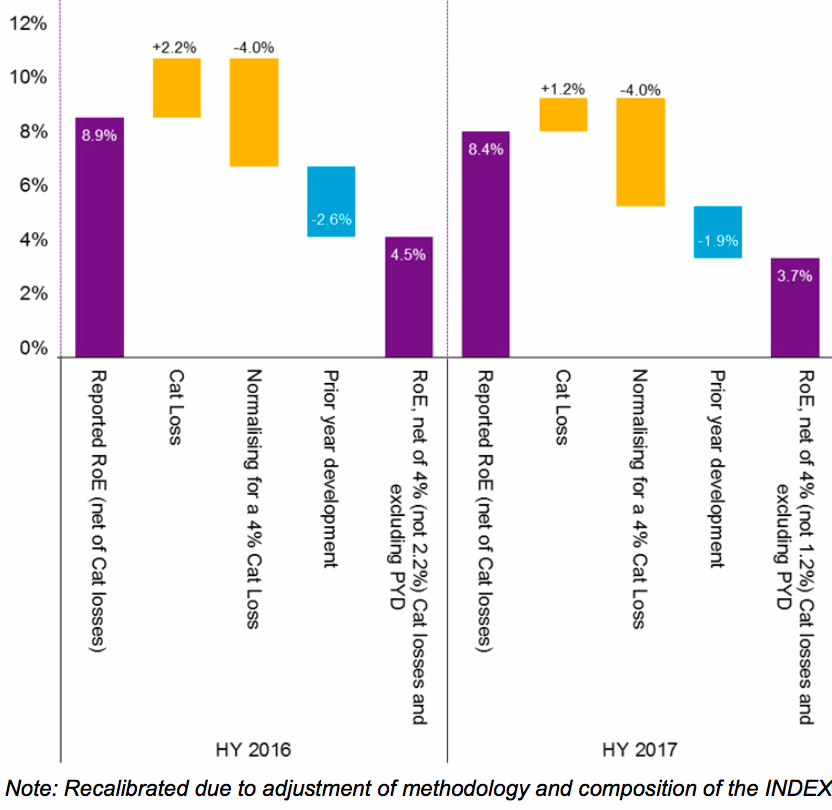 John Cavanagh, Global CEO of Willis Re, commented on the continued pressure facing reinsurers; “Ongoing market pressures are undoubtedly manifesting themselves in a diminishing underlying return on equity and further impacting reduced net incomes. This deterioration is further weakening the global reinsurance industry’s performance. However, despite these challenging conditions shareholders’ funds have strengthened, maintaining robust balance sheets across the market.”

Interestingly, Willis Re notes that as expenses have risen consistently over the period of the soft market reinsurers could have been earning as much as 2.5% more in RoE, had they been able to keep their expense ratios at levels similar to those seen in 2007.

It’s clear from the chart below that reinsurers are becoming increasingly less profitable, no matter how well-capitalised the industry is. Hence, as hurricane Irma threatens a second major storm loss in a matter of weeks, reinsurers will be looking nervously at what this could do to their profits this year and hoping that any dent can be recouped through increased pricing at future renewals (which of course remains to be seen).

The buffers provided by reserves are shrinking and leaving reinsurers with fewer places to hide, as this soft market continues. 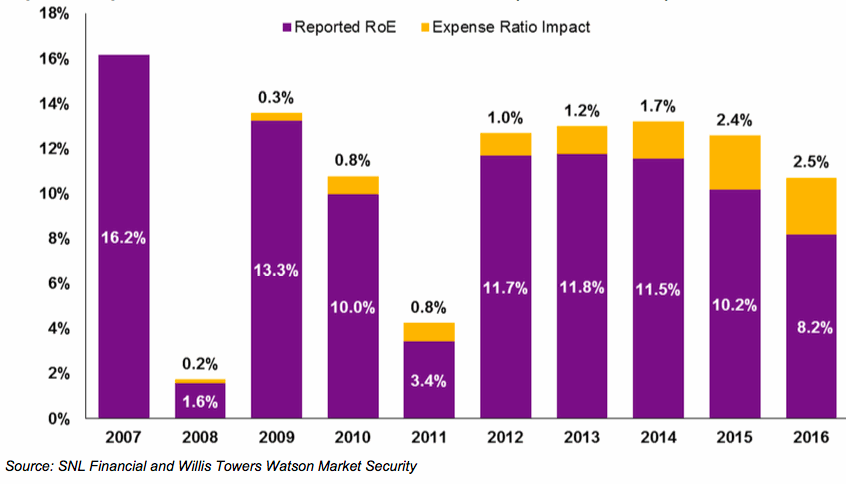