Global providers of reinsurance and retrocession capacity could shoulder as much as 70% or more of insurance industry losses from the Fort McMurray area wildfire in Alberta, Canada, as insurers typically only retain low percentages of gross losses, analysts said. 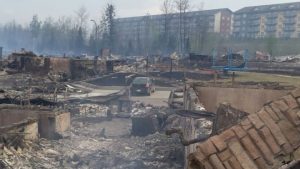 Artemis wrote last week that the Fort McMurray wildfires would likely be a reinsurance event, with an expectation that a significant proportion of losses would fall to the global reinsurance market, and as a result a portion to ILS capital.

As the extent of the damage has become clearer it is accepted that this will be a significant insured catastrophe loss, potentially the largest single event in Canada’s history.

It’s now understood that over 2,400 structures have been burned by the wildfires in Fort McMurray, which is around 10% of the cities buildings.

That’s lower than had been anticipated, but when you consider the value of properties in the region and compare it to the Slave Lake fire, which caused over C$700m of insurance losses by only damaging around 500 structures in an area where property values are lower, it’s easy to envision that the Fort McMurray insurance loss will be considerably higher.

Analysts at Morgan Stanley looked at the loss estimate given by Canadian primary insurer Intact Financial to get an idea of the scale of the potential loss for reinsurance firms and the ILS market.

The analysts said that Intact’s reinsurance program would retain $140m of the first $200m of gross losses and ~8% after, which could mean an implied total loss for Intact in the range of $600m to as much as $1 billion.

With Intact having around a 17% market share in Canada and almost 20% in Alberta auto lines, the Morgan Stanley analysts estimate an industry loss in the range of $3 billion to $6 billion. The analysts note the uncertainty in this, given Intact’s estimate was based on analysis of satellite imagery overlaid with geo-location policy information.

Intact’s loss estimate implies that it will only retain between 20% and 30% of the loss from the wildfire, Morgan Stanley’s analysts suggest, which if true for the primary industry in Canada could result in reinsurance markets taking as much as $2 billion to $5 billion of the loss (based on the $3b to $6b estimate.)

While the estimate, in terms of total, remains very uncertain at this time, it is understood that primary insurers in Canada do make heavy use of reinsurance and also quota shares, which could see the lions share of the wildfire insurance losses passed on to reinsurers and the ILS market (where it participates).

Morgan Stanley’s analysts said that Intact Financial has around 50 reinsurers on its program, which suggests the loss at least from this firm will be shared very broadly across the market, rather than concentrated with any one company.

With reinsurance capital set to perhaps take the majority of the losses from the Canadian wildfires, it is assumed that some insurance-linked securities (ILS) funds, collateralised reinsurance sidecars and other third-party capital backed arrangements may take a small share.

Given Canada’s primary insurer market uses a considerable amount of reinsurance support and much of it quota share, there is a likelihood that this will flow into quota share sidecars of the major reinsurers to a degree. It could also flow into retrocession contracts, raising the chances of some impact to certain ILS fund managers.

It is also possible that there are industry loss warranties (ILW’s) exposed to the Canadian wildfires. With Canada typically considered a “cold spot”, as far as natural catastrophes are concerned, triggers for ILW’s covering all natural perils for Canada are typically around the $5 billion or $10 billion mark, but an ILW broker said that they have been seen in the market with triggers as low as $2 billion or $3 billion.

Whether there are any Canada exposed ILW’s, with these very low triggers, currently in-force is impossible to say, but if there are it stands to reason that ILS capital will be backing them.

Of course that brings into play the requirement for an industry loss estimate to be reported, likely by PCS as the most widely used arbiter of loss for the U.S. and Canada, so it could take some time for the fate of any exposed ILW to be known.

PCS Canada has designated the event a catastrophe and will now begin its claims determination process, with the first industry loss estimate from the organisation available in two weeks time, Artemis understands.

Ratings agency A.M. Best said that while the losses from the Alberta wildfires are expected to be substantial, primary insurers “comprehensive reinsurance programs” will mitigate the financial impact to them.

Fitch Ratings said that it believes that “the magnitude of the event leads to a larger proportion of losses borne by reinsurers,” although it will take some time for the impact to reinsurers to be understood as “reinsurance buying practices of Canadian underwriters likely varies somewhat based on differences in organization structure.”

So opinions are certainly converged on the reinsurance market facing a significant proportion of the Fort McMurray wildfire losses.

How significant that proportion will be is impossible to estimate and there remains considerable uncertainty over the size of the final insured loss total, how much contribution to that will come from business interruption and how much of that will be passed on (after retentions) through reinsurance and retrocession contracts.

Ultimately a proportion of the loss will be borne by some ILS investors, either through ILS fund or reinsurance sidecar exposure. Exposure in the ILS market will likely be uneven, with not every ILS fund manager underwriting much Canadian risk. But the larger ones certainly do and any ILS participation in quota shares, the reinsurance sidecars and any retrocessional exposure perhaps the more likely to result in impact to investors.

It should be noted that ILS capital will only take a small proportion of the loss passed onto the reinsurance market, given the size of the ILS market versus the overall reinsurance sector.

However ILS’ share is greater in retrocession, quota shares and also the capital backing instruments such as ILW’s, so any losses suffered there could translate into a greater impact to private ILS positions and ultimately fund NAV’s and sidecar returns for investors.