Property catastrophe reinsurance rates-on-line rose by an estimated 26% at the June 1st 2020 renewal season, according to the latest data from an index tracking average risk-adjusted pricing from Hyperion X Analytics.

The figure is aligned with reports that reinsurance renewal rates-on-line increased by anywhere from 20% to 30% broadly across Florida, the key property catastrophe zone.

Reinsurance rates are broadly firming as the insurance industry deals with the challenges created by the Covid-19 pandemic.

But in the peak property catastrophe zones, such as Florida, reinsurance prices had already been rising earlier this year at the January and April renewals, so were always expected to follow-suit at the mid-year renewal season.

Reports have suggested that some Floridian insurance carrier cedents paid much higher price increases, depending on the performance of their portfolios and reinsurance programs over recent hurricane seasons.

The company has shared the latest data as of June 1st from its Hyperion X Property Catastrophe Reinsurance Rate-On-Line Index with us. 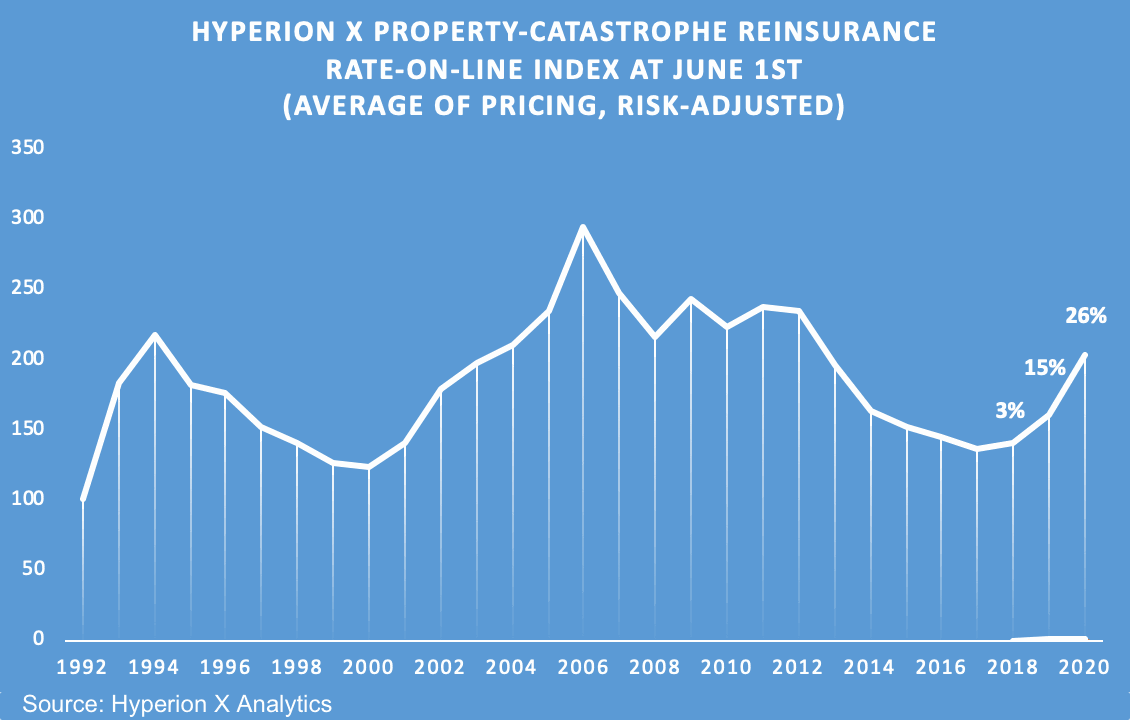 Hyperion X Analytics tracks the average risk-adjusted pricing it sees in the reinsurance renewal market and tracks pricing trends in an index.

The 26% increase in property catastrophe reinsurance rates-on-line seen in 2020 is of a similar magnitude (in percentage terms) to the price increases last experienced at renewals after the 2005 hurricane season, the chart above shows.

According to Hyperion X Analytics data, property catastrophe reinsurance rates have been rising now for three consecutive years, with the rate of increase accelerating.

Rates increases are actually now moving at their fastest pace since 2002 when the increases was 28%, the data shows.

While rates are accelerating much faster, it is still not an even marketplace in property catastrophe reinsurance.

David Flandro, Managing Director, Hyperion X Analytics explained to us that there is “an unusually wide range around our weighted average this time.”

Supply was said to be particularly low at this year’s June reinsurance renewals, but demand had not been diminished, despite the challenges carriers have faced.

Hyperion X’s index shows property catastrophe reinsurance rates back at their highest level since 2012, which was prior to much of the growth of the insurance-linked securities (ILS) capacity in the sector and without doubt now signals higher underwriting returns available for reinsurers and ILS funds.

With forecasts now suggesting that property and casualty rates will continue to firm and that 2021 could be the hardest market seen in years, it will be interesting to see how this is reflected in Hyperion X Analytics’ index after further renewals later this year and into January.