The continued growth of private cat bond and ILS deals continued in the second-quarter of 2016, helping to offset a notable deterioration in traditional 144A issuance and a high volume of maturities that resulted in a decline of the outstanding market size, according to GC Securities.

Private catastrophe bonds, also referred to as cat bond lites, are essentially a lower-friction, more efficient, and faster means for issuers to access the capital markets, as opposed to the traditional 144A catastrophe bond.

Typically smaller in size, although in recent times some private deals can be seen to be approaching the smaller end of the traditional placements, private deals have become increasingly accepted and understood by both insurance-linked securities (ILS) sponsors and investors as a viable alternative to a 144A transaction. 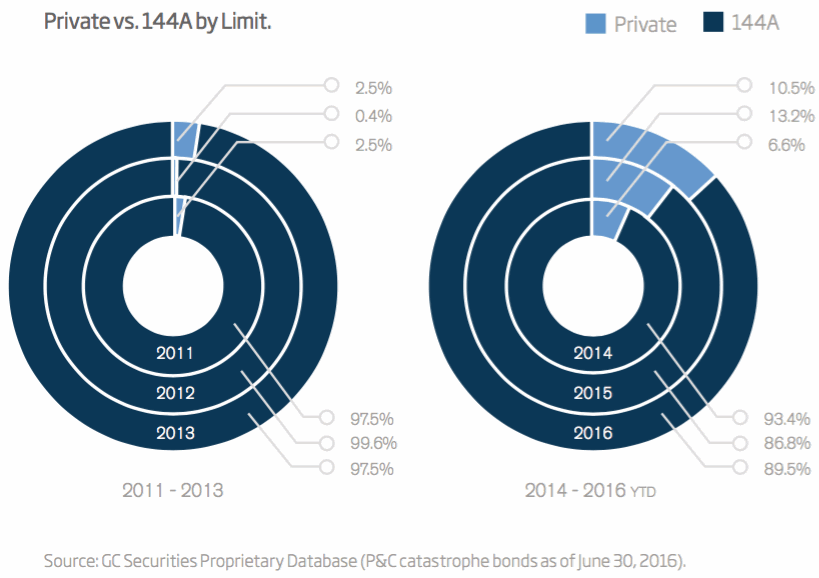 As highlighted by the above charts, provided by GC Securities as part of its contribution as co-editor of the Artemis Catastrophe Bond & ILS Market Reports, private cat bond issuance has been on the rise and continues to claim a larger slice of annual, overall cat bond and ILS market issuance.

“While the private cat bond market continues to grow, we acknowledge that some of these issuances are transactions that were previously completed in collateralized reinsurance format and/or from issuers who previously utilized only 144A offering format,” explained Cory Anger, Global Head of ILS Structuring at GC Securities, in the Artemis Q2 2016 Catastrophe Bond & ILS Market Report.

Once placed, private cat bonds operate in the same way as a traditional 144A transaction, but the streamlined approach to the securitisation of risk and their lower-frictional costs, means deals can be done at a faster rate and in a more efficient way.

Some of the smallest cat bond lite transactions completed in the market include the Li Re issuance platform from an unknown sponsor (the sponsor is typically unknown with a private cat bond), and also the Dodeka platform.

On the other end of the spectrum, the Artemis Deal Directory shows that some private deals, notably the Market Re issuance platform, have pushed the boundaries of the cat bond lite structure, with some deals exceeding $75 million in size.

Traditional 144A placements clearly still dominate annual catastrophe bond and ILS issuance, but the fact that private deals have on average increased their share of overall issuance by more than 8% in the last 30 months, and the larger size of some of the deals coming to market, underlines the increased value and acceptance of cat bond lites among the ILS community.

It’s also evidence of the broadening range of structures and features of the ILS space that enables capital markets players to access insurance and reinsurance linked investments, ultimately contributing to the overall expansion of the ILS sector.

The private cat bond market is set to become a meaningful part of annual catastrophe bond issuance statistics, as they provide an ideal entry-point to the market for sponsors and a way to test new concepts or ideas. 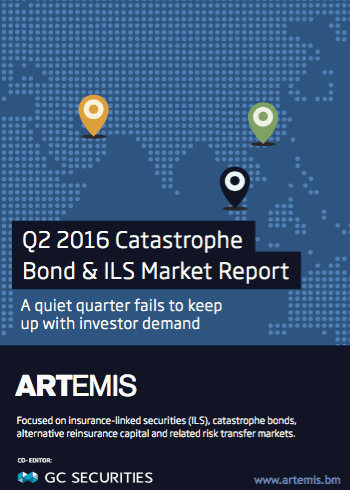