The performance of insurance-linked securities (ILS) funds that invest in private ILS and collateralised reinsurance contracts diverged again in November, while pure catastrophe bond funds were down as a group, the latest Index data from ILS Advisers shows. 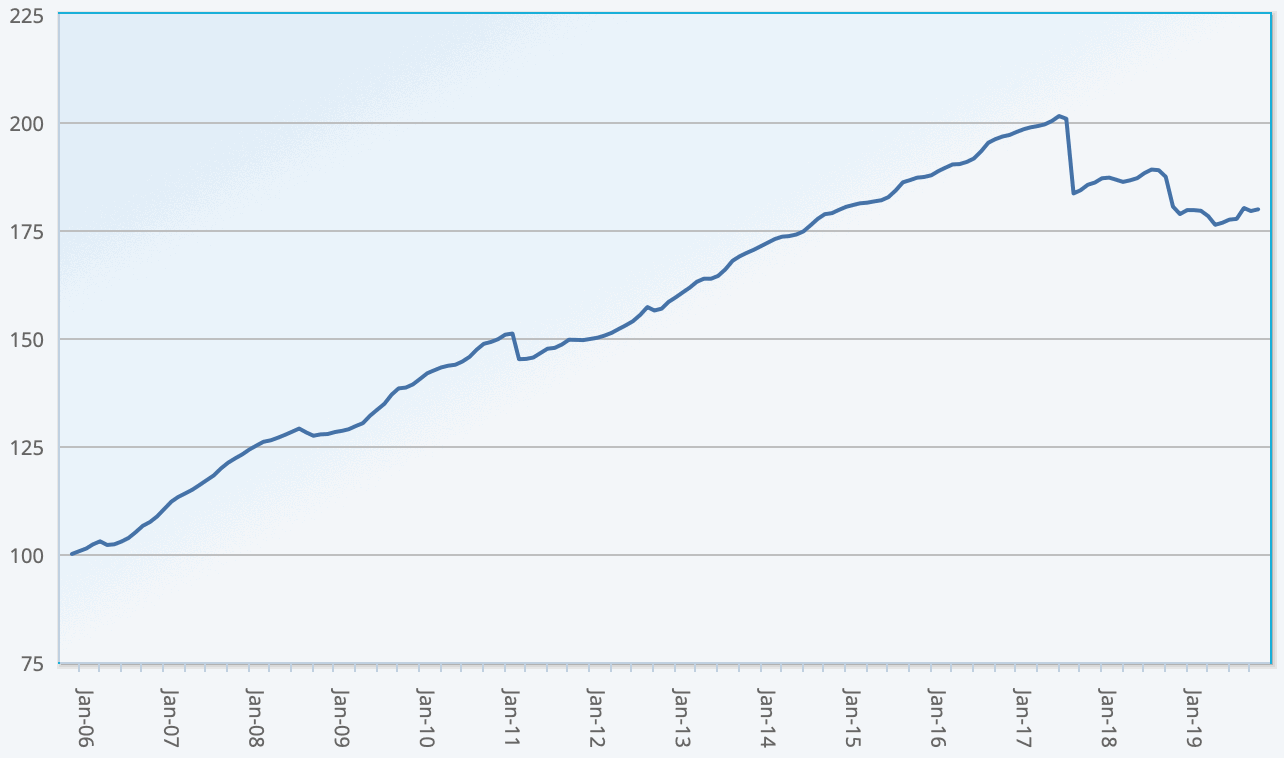 Overall the ILS and cat bond fund sector as tracked by the Eurekahedge ILS Advisers Index recorded an average rise of 0.22% in November 2019, as strong premium flow to private ILS funds helped to buoy the group to a positive return for the month.

This took the year-to-date return for the group of ILS funds tracked by ILS Advisers to 0.62% to the end of November, leaving a positive full-year in sight after the two negative years of 2017 and 2018.

However, a number of factors impacted November’s ILS fund returns, which the Index could have been much higher without.

As we explained recently in this article, a number of private ILS funds had to adjust their losses from typhoon Hagibis during November, resulting in a decline for a number of fund managers during the month.

This drove a divergence in performance among funds that allocate to private ILS and collateralised reinsurance, with some having another particularly negative month. The gap between the best and worst performing was 3.6% in November, an improvement on the prior months almost 10% gap.

“Year-to-date, there is a large difference in performance as pure cat bond funds are up 3.05% while private ILS funds are down 1.13%,” Kräuchi further explained.

It wasn’t just private ILS funds that were among the negative funds though, as catastrophe bond funds suffered from pricing declines in November as new issuance levels drove a drop in secondary pricing.

However the cat bond funds as a group have had the better of it in 2019, helping them to outperform the group of private ILS funds by more than 4% for the first eleven months of the year.

That really shows the impacts of recent year’s catastrophe loss events and loss creep, driving home the fact that it has continued to negatively impact some private ILS funds and investments through much of 2019.

November’s cat bond fund performance was hit by secondary pricing movements, which were largely driven by the acceleration in primary cat bond issuance.

As ever, this can drive more selling pressure and so a price decline, as ILS fund managers reposition their portfolios for allocating to new cat bond deals.

In addition, the time of year with reinsurance renewals approaching can also result in selling pressure in the catastrophe bond market, as ILS fund managers adjust portfolios and free up capital for underwriting renewal deals.

Kräuchi commented, “Cat bond prices fell -0.56% in November, resulting in a -0.06% total return for the Swiss Re Global Cat Bond Index. There were a number of new issues coming to market in November at higher spreads. As often is the case, managers repositioned portfolios by buying new issues and selling older ones, which triggered a re-pricing of outstanding bonds. ILS managers are also starting to sell liquid cat bond investments to fund January 1st collateralized reinsurance contracts.”

One final issue that affected catastrophe bond funds in November was the total loss of the €45 million Atmos Re DAC catastrophe bond transaction, which had been sponsored by Italian primary insurer UnipolSai Assicurazioni S.p.A..

This cat bond covered aggregated European severe weather events and was impacted by losses caused by recent flooding events that affected the Mediterranean region of Spain, France, and Italy, so having another dampening effect on cat bond fund returns where they had invested in the bond.

Overall, ILS funds look set to end 2019 with positive performance as a group, but with catastrophe bond funds leading the way and private ILS funds experiencing a wide divergence in performance, depending on how their specific collateralised reinsurance and retrocession positions performed.

You can track the Eurekahedge ILS Advisers Index here on Artemis, including the USD hedged version of the index. It comprises an equally weighted index of 32 constituent insurance-linked investment funds which tracks their performance and is the first benchmark that allows a comparison between different insurance-linked securities fund managers in the ILS, reinsurance-linked and catastrophe bond investment space.