The broad diversity within the insurance-linked securities (ILS) fund market became very apparent in October 2019, as the impacts of catastrophe losses from Hagibis drove the gap between best and worst performing ILS fund to almost 10%. 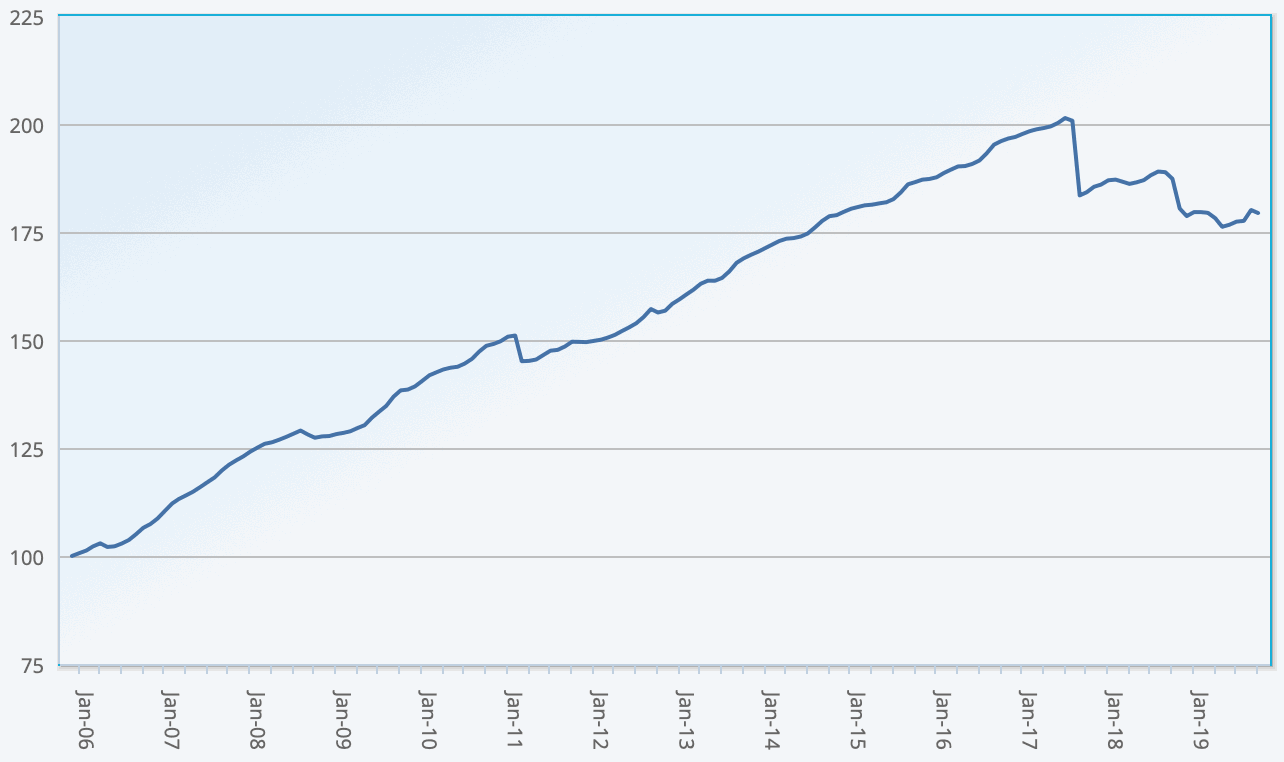 It’s one of the highest figures we’ve seen in our almost two decades tracking the sector, for the gap between best and worst performing ILS fund for a single calendar month, reflecting the significant diversity available in terms of strategies and as a result risks and returns of ILS investment funds.

Overall, the ILS and cat bond fund sector as tracked by the Eurekahedge ILS Advisers Index recorded an average decline of -0.39% for the month of October 2019, largely on the impacts from Japanese typhoon Hagibis.

As we reported a few days ago, some private ILS or collateralised reinsurance positions have taken a significant hit from Hagibis, as well as the aggregated losses from hurricane Dorian, typhoon Faxai and Hagibis as well.

As a result, a negative month for October was expected and the overall average of down -0.39% is perhaps not as bad as might have been expected, but this has been helped significantly by relatively strong performance from the catastrophe bond market that helped pure cat bond funds to another healthy return for the month.

The ILS Advisers Index remains positive for the year so far, with a return of 0.39% to the end of October.

But October once again demonstrated that the ILS fund market features a very wide range of strategies, risk and return profiles within it, meaning some funds fared much better than others.

ILS Advisers Founder Stefan Kräuchi explained to us, “October was a bifurcated month, which saw wide dispersion of returns. The best fund was up 3.08% while the worst declined 6.76%.”

That’s almost a 10% gap (just over 9.8%) between the best and worst performing ILS fund, one of the widest gaps we’ve ever seen reported and a clear reflection of the diversity between strategies in the sector.

A positive 3.08% return is particularly impressive, as it has to have been a fund that invests in private ILS and reinsurance but that avoided much impact at all from the typhoon loss activity of Hagibis.

Further highlighting the diversity between ILS fund strategies, Kräuchi said, “Pure cat bond funds performed well (+1.14%), whereas funds focusing on private ILS transactions were down -1.52% as a group. Out of the 33 funds in the Index, 19 were positive and 14 lost money.”

Kräuchi continued, “The key differentiating factor was exposure to Japan. Typhoon Hagigis made landfall in the Tokyo area October 12th. Even as the storm had slowed considerably to make landfall as a category 2 equivalent hurricane, it delivered record breaking precipitation to a large portion of Honshu Island. Hagibis is estimated to cost industry losses in the $8-16bn range. This makes it one of the most costly typhoons in Japan’s history.”

After the experience of the market in 2018 and 2019 with loss creep, Kräuchi believes that ILS fund managers have shown signs of learning from this, saying, “It seems that most managers have built higher loss reserves on typhoon Faxai and Hagibis this year.”

“Cat bond funds rose as the US wind season remained quiet. There are only a few cat bonds in the market exposed to Japan typhoon risk, which are unlikely to be triggered by Hagibis. Also, we saw some good recoveries in the pricing of cat bonds that were marked down heavily after the 2017 hurricanes (Harvey, Irma, Maria),” Kräuchi explained.

ILS Advisers has also noted some more positive movement related to 2017 side pockets among private ILS fund managers as well, with greater clarity now emerging on prior year losses which allows some managers to revise estimates to the benefit of their funds and investors.

“As loss estimates are starting to stabilize for these events and uncertainty recedes, prices for cat bonds that were triggered are moving higher. We also saw managers of private ILS funds starting to revise their loss reserves downward for the 2017 related side pockets,” Kräuchi commented.

The private ILS funds, as a group, have some way to go to catch up with pure catastrophe bond funds in 2019 though.

As of the end of October 2019, private ILS funds (so those invested in collateralised reinsurance and private deals) were underperforming the group of pure cat bond funds by 4.92% year-to-date.

2019 looks like it could be a year where, on average across the groupings, cat bond funds turn out to be the best performing ILS strategy group for the year.

Of course, there will be private ILS funds that have avoided a lot of the losses and have better performance than cat bonds.

But, the 2019 returns of cat bond funds could turn out to be particularly attractive, positioning the sector for increased investor interest as we move into 2020.

You can track the Eurekahedge ILS Advisers Index on Artemis here, including the USD hedged version of the index. It comprises an equally weighted index of 32 constituent insurance-linked investment funds which tracks their performance and is the first benchmark that allows a comparison between different insurance-linked securities fund managers in the ILS, reinsurance-linked and catastrophe bond investment space.