The government of the Philippines sees the successful issuance of its first catastrophe bond, the World Bank facilitated $225 million IBRD CAR 123-124 cat bond, as an example of the country “climate proofing” itself, as well as an endorsement of its natural disaster resilience strategy. 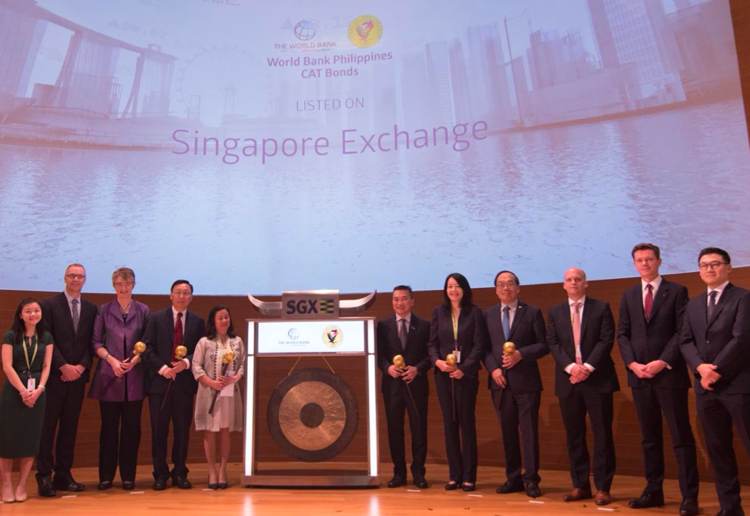 It’s also emerged that the Philippines has been the beneficiary of a grant under the Monetary Authority of Singapore’s (MAS) insurance-linked securities (ILS) grant program, that helped to get the issuance over the line.

The transaction completed at the end of last week, securing the government of the Philippines a source of capital markets backed disaster insurance protection, consisting of $75 million of earthquake coverage and $150 million of tropical cyclone coverage, across a three-year term.

It’s a landmark transaction for the Philippines, as well as for the World Bank and the broader insurance-linked securities (ILS) market, as this is a cat bond deal that was around a decade in the making.

The Philippines government has been implementing a series of disaster risk financing, insurance and resilience initiatives in recent years, ranging from resilience planning, to parametric insurance and reinsurance pools, catastrophe swaps and other structures.

The first catastrophe bond to support the Philippines disaster risk financing needs is notable for a number of reasons, being the first cat bond ever to be sponsored by an Asian sovereign country, as well as the first to list on the Singapore stock exchange.

Finance Secretary of the Philippines Carlos Dominguez III commented on the successful cat bond issuance, “This maiden ILS float is just one of the many innovative structures and projects that the government is undertaking to improve the resilience against natural calamities of the Philippines, which is among the world’s economies most vulnerable to climate change.”

He said that strong investor interest was seen in the catastrophe bond, which is a reflection not just of the attractiveness of the issue, given it provided a welcome diversification opportunity, but because it also reflects support for the Disaster Resilience Agenda of the Philippines government.

“The successful float of the Philippines’ first ever ILS or Cat bonds is one more proof of the strong investor support of the international business community for the Philippines amid the sweeping reforms being implemented by the Duterte administration to sustain the growth momentum while climate-proofing the country,” Dominguez continued.

Rosalia De Leon, National Treasurer of the Philippines, also commented, “This instrument was years in the making, and we are grateful to the World Bank and our structuring agents for ensuring a successful deal. We would also like to thank the Monetary Authority of Singapore (MAS) for their invaluable support of this endeavor and for the grant that they gave the Philippines to defray some of the expenses of this transaction.

“With our exposure to natural disasters, we cannot just sit idly by and do nothing. This instrument is a way for us to proactively protect the fiscal health of our government against natural disasters.”

The cost of sponsoring a first catastrophe bond transaction is significant and the Monetary Authority of Singapore’s ILS grant scheme is an invaluable way for some of the cost to be offset, allowing first time and sovereign sponsors to access the capital markets more cost-effectively.

The notes of the Philippines cat bond were listed on the Singapore Exchange (SGX), which is likely a reason the Philippines issuance qualified for the MAS grant, even though it has not used a Singapore domiciled special purpose vehicle (being issued through the IBRD capital at risk notes program).

Getting the first Asian sovereign sponsored catastrophe bond successfully to market is an important step for the expansion of the use of cat bonds as a source of sovereign disaster risk financing.

The issuance was helped enormously by the World Bank, reinsurance market participants given the roles of Guy Carpenter, Swiss Re and Munich Re, as well as the ILS funds and investors that supported the transaction.

Singapore has provided a significant level of support, both financially and in providing a home for the notes, also helping to get this landmark cat bond deal finally to market.

For almost a decade we have discussed the potential for the Philippines to sponsor a catastrophe bond and active engagement on the subject have been underway for at least six or more, so it’s very encouraging to see this transaction get to market and its high-profile nature should help to broaden awareness of the catastrophe bond market among other potential sponsors, sovereign or commercial in nature.