Yesterday, as tropical storm Pamela was intensifying in the Pacific and heading for a landfall in Mexico, the forecasts at the time were suggesting Pamela would quickly become a hurricane and then intensify to major category 3 or stronger before landfall, which suggested that Mexico’s World Bank facilitated IBRD / FONDEN 2020 parametric catastrophe bond could be at risk.

This morning, the picture has improved somewhat, as the latest forecasts now suggest that while hurricane Pamela is expected in the coming hours, the storm is unlikely to be able to intensify to the major strength that had once been predicted, reducing the threat to the only catastrophe bond exposed to a Pacific hurricane landfall in Mexico.

We began to investigate Pamela yesterday after hearing from some contacts in the catastrophe bond investment community that the storm was being closely watched due to the forecasts suggesting intensification and a major hurricane landfall.

The Fonden 2020 catastrophe bond provides the Mexican government with disaster risk transfer and financing for earthquakes and hurricanes, with one tranche of notes protecting the Pacific coastline against major hurricane landfalls.

Being parametric in nature, the Fonden cat bond requires a hurricane to come ashore at a certain intensity and location, with intensity defined by how low the minimum central pressure of a hurricane is when it crosses a line drawn along the coast.

A $125 million Class D tranche of notes is the one exposed to hurricanes on the Pacific side of Mexico and the parametric trigger is structured to enable a 25%, 50% or 100% payout rate, depending on the minimum central pressure of a hurricane and the location a storm approaches the shore.

For a Pacific hurricane to trigger even a 25% payout of the $125 million of principal of the Class D tranche of notes though, a hurricane would have to deepen to at least a minimum central pressure of 935 mb, or lower.

Pamela, still a tropical storm at this time, has minimum central pressure estimated at 992 mb currently.

While it is still forecast to become a hurricane and could near major strength, with the forecasts now downgraded significantly, compared to yesterday’s predictions of a major hurricane landfall, it seems less likely a hurricane Pamela trigger event could occur for the Fonden cat bond. The threat hasn’t gone away, but it does look reduced now.

The forecast for Pamela has changed quite dramatically in just over 12 hours. Below, on the left, you can see an image of the NHC’s forecast cone for Pamela at 12:00 MDT yesterday, October 11th (19:00 UK, 14:00 EST) when a major hurricane landfall was still forecast. On the right is the NHC’s latest forecast cone, showing no major hurricane landfall. Click the image for a larger version.

Now, it’s important to note that the forecast for hurricane Pamela still suggests it will be close to major hurricane strength when it makes landfall and obviously there is a chance of rapid intensification, as the waters off the coastline remain very warm. So deepening to 935 mb or below cannot be completely ruled out.

But certainly, the latest forecasts suggest a reduced chance of the central pressure of hurricane Pamela being able to drop sufficiently to trigger Mexico’s Fonden catastrophe bond.

You can see an image of the parametric trigger design for a 25% payout of the Fonden Class D cat bond notes below, which a contact shared with us. 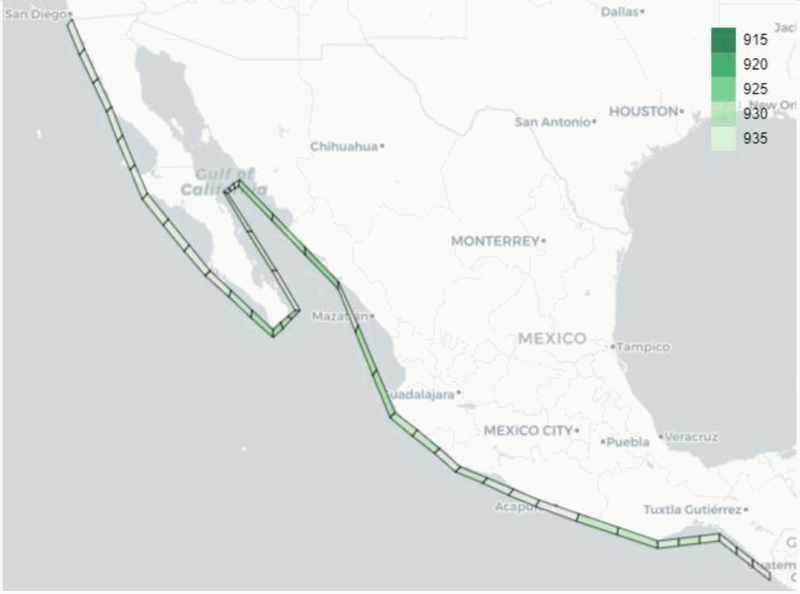 So, for hurricane Pamela to trigger even a 25% payout, the storm has to reach 935 mb or below, in terms of central pressure and cross the line drawn on the map above.

Based on the location that hurricane Pamela is forecast to come ashore, it seems a minimum central pressure even lower is required, below 930 mb or even 925 mb (it’s very hard to tell with these maps).

Given the now much less intense forecast for hurricane Pamela, it seems unlikely the storm’s low could deepen sufficiently to have a minimum central pressure low enough to trigger the Class D catastrophe bond notes from Mexico’s Fonden issuance.

It’s not impossible though, hurricanes have deepened and intensified significantly on approach to Mexico’s Pacific coastline before, so if hurricane Pamela nears major category 3 or stronger levels of intensity then the cat bond will definitely be at-risk.

But right now, based on the latest forecasts and how modelled intensity forecasts have declined over night, it seems the chances of Pamela threatening the Fonden catastrophe bond are much reduced from how the situation looked yesterday.

We suspect holders of the Class D tranche of notes from the Fonden catastrophe bond will be watching how Pamela develops today, as it is expected to be designated a hurricane shortly, so the cat bond will still be considered on-watch as the latest forecast data comes in throughout today.

Pamela is expected to pick up speed as it heads for the Mexico coastline and a landfall on Wednesday morning local time and while nearing major status is still forecast, it now comes down to central pressure and just how low it can drop in the next twenty-four hours.

We’ll update you should the forecast begin to worsen again and it look more likely the Fonden catastrophe bond notes could come under threat from hurricane Pamela.