The US National Oceanic and Atmospheric Administration (NOAA) has updated its forecast for the 2021 Atlantic hurricane season, saying that it now anticipates an even more active year in the Atlantic tropics, with now a 65% chance of above-normal activity levels.

So this was not a prediction for the hyper-active hurricane levels seen last year, which may have provided some comfort for insurance, reinsurance and insurance-linked securities (ILS) market players.

Now, NOAA has updated the forecast, which also takes account of the activity seen so far (5 named tropical storms and 1 hurricane), so the probabilities for the season are pegged as a 65% chance of above-normal activity, 25% near-normal and 10% below-normal.

Now, the forecast numbers have also been increased, to 15 to 21 named storms, 7 to 10 hurricanes and 3 to 5 major hurricanes. 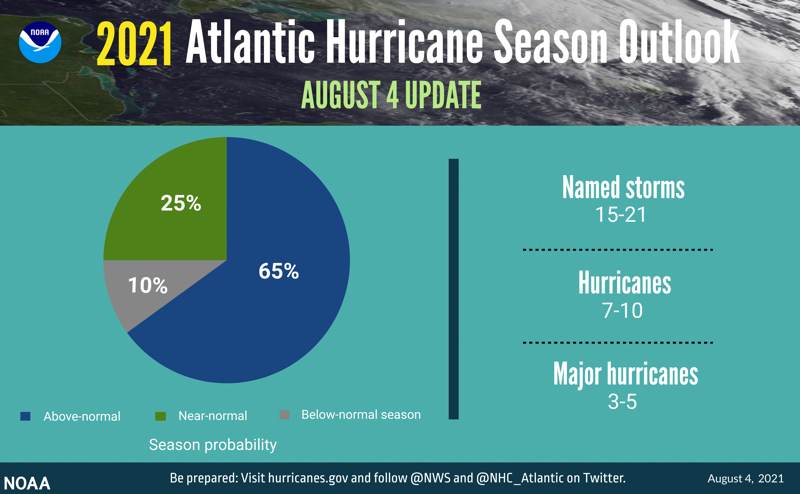 While we’ve already seen 5 storms and 1 hurricane, the fact the numbers have increased and we’re now into August reflects the fact meteorologists are anticipating a lot of activity around the traditional peak of the Atlantic hurricane season in 2021.

“After a record-setting start, the 2021 Atlantic hurricane season does not show any signs of relenting as it enters the peak months ahead,” explained Rick Spinrad, Ph.D., NOAA administrator.

“A mix of competing oceanic and atmospheric conditions generally favor above-average activity for the remainder of the Atlantic hurricane season, including the potential return of La Nina in the months ahead,” added Matthew Rosencrans, lead seasonal hurricane forecaster at NOAA’s Climate Prediction Center.

NOAA explains conditions in the tropics, saying, “Atlantic sea surface temperatures are not expected to be as warm as they were during the record-breaking 2020 season; however, reduced vertical wind shear and an enhanced west Africa monsoon all contribute to the current conditions that can increase seasonal hurricane activity. These conditions are set against the backdrop of the ongoing warm phase of the Atlantic Multi-Decadal Oscillation, which has been favoring more active hurricane seasons since 1995.”

Adding NOAA’s update to the set of forecast data-points tracked by the reinsurance, catastrophe bond and wider ILS industry, our Artemis average now sits at 18 named storms (up by 1 with this addition), 9 hurricanes and 4 major hurricanes.

Which means there is a lot of activity still to come in the Atlantic basin, if the seasonal figures are to get anywhere near the forecasts.

Meteorologists are beginning to suggest that the Atlantic may look more conducive to tropical storm formation in a week or two’s time, after which we near the seasonal peak when all eyes in insurance, reinsurance and ILS tend to be on the tropics.

So forecasts for a particularly active hurricane season continue and are perhaps rising, even accounting for the activity already seen.

This should serve as a reminder for reinsurance market participants, as well as the ILS and catastrophe bond investment community, that there is always a very real threat of losses as the season progresses (remembering that it only takes one landfall to create significant human and financial impacts).