The U.S. NOAA continues to push for a more active 2016 Atlantic Tropical Storm and Hurricane Season, increasing its forecast in an update yesterday and saying that the ending of El Niño, possible onset of La Niña, weaker vertical wind shear and trade winds, all suggest the most active season since 2012.

That has now been updated and the storm numbers increased, to a prediction that there is a 70% chance of 12–17 named tropical storms forming during the 2016 season, with 5–8 expected to become hurricanes, and 2–4 major hurricanes.

For the insurance-linked securities (ILS) and catastrophe bond market, U.S. hurricane risk remains the major threat of losses given the prevalence of the peril in the market. For the global reinsurance market the threat of losses is similarly large, and U.S. landfalling hurricanes remains one of the biggest threats to profitability. 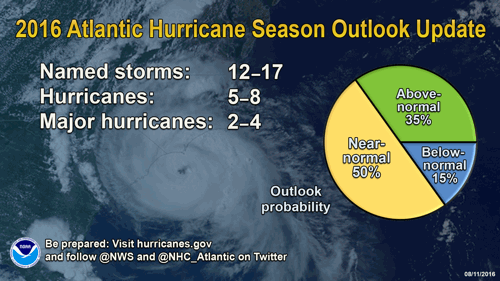 However, and some solace for insurance, reinsurance and ILS specialists or investors, Bell does not expect the 2016 season will turn into a record breaker.

Bell said; “However, less conducive ocean temperature patterns in both the Atlantic and eastern subtropical North Pacific, combined with stronger wind shear and sinking motion in the atmosphere over the Caribbean Sea, are expected to prevent the season from becoming extremely active.”

Also yesterday, NOAA updated its forecast for La Niña’s prospects in 2016, saying that it is slightly favored to develop between August and October 2016, and that it gives about a 55-60% chance of La Niña occurring during the autumn and winter of 2016-17.

“Given these competing conditions, La Niña, if it develops, will most likely be weak and have little impact on the hurricane season,” Bell commented.

NOAA’s hurricane season forecast update gives a slightly higher likelihood of a near-normal or above-normal season in 2016, and decreases the chance of a below-normal season to only 15%.

The update from NOAA comes on the heels of Tropical Storm Risk’s reduction in its forecast for 2016 Atlantic storm activity, which reflects the fact that it’s important to look across the range of forecasts to capture all the scientific thinking on hurricane potential each year.

It’s important to be prepared as we move towards the peak of the season, both for populations in the hurricane zones as well as for the insurance, reinsurance and ILS industry.

We track a group of hurricane forecasters here on Artemis, over on our Atlantic storm season page. The addition of this NOAA update raises the average, giving us an Artemis average forecast for the 2016 hurricane season of 14.3 named storms, 7.4 hurricanes and 3.3 intense hurricanes, above average the long-term and seasonal averages (seasonal avg. being 12, 6 and 3).