The US National Oceanic and Atmospheric Administration (NOAA) has now issued its first forecast for the 2021 Atlantic hurricane season, saying that it expects a 60% chance of above-normal activity levels, but not to the degree seen a year ago. 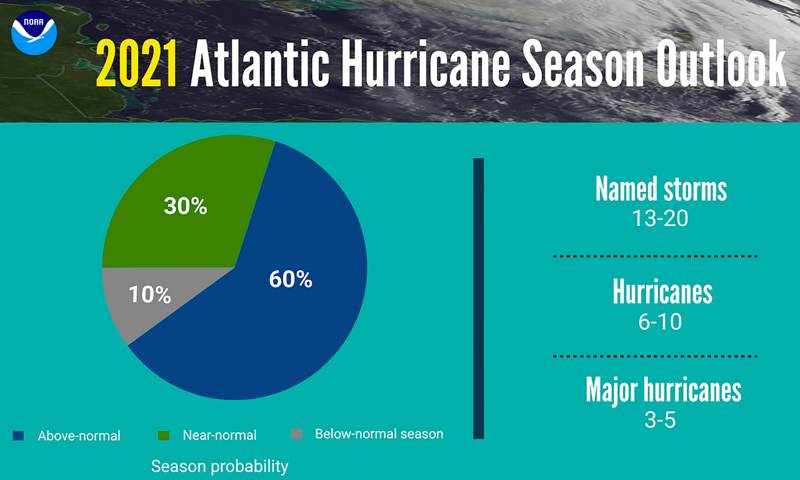 The Administration also noted that El Nino Southern Oscillation (ENSO) conditions are neutral now, but with the possibility of the return of La Nina later in the hurricane season.

As we previously explained, an average hurricane season is now deemed to be 14 named storms, of which 7 become hurricanes, and 3 major hurricanes after NOAA updated its numbers for the average.

On that basis and considering NOAA’s forecast, the chances of above average activity this year seem high once again.

Adding this latest forecast into the mix of those we track on our dedicated hurricane season page, brings our Artemis average forecast to 17 named tropical storms, 8 hurricanes and 4 major hurricanes (an increase of 1 major hurricane after including this NOAA forecast and rounding), with ACE now predicted to be around 143 (down from 150).

Our Artemis average remains close to the near-term average of the last decade of seasons, which sits at 17 named storms, 7 hurricanes and 3 major hurricanes.

As we explained yesterday, when a lower forecast was published by the UK Met Office, forecast skill levels remain relatively low, especially if you review the forecasts for recent seasons from different organisations, versus the actual storm and hurricane numbers.

In addition, it’s important to remember that, while forecasts provide some directional sense of the level of tropical storm activity we may see in a given season, it’s in no way an indicator of potential reinsurance or ILS market losses.

As we also explained, steering currents for storms and wind-shear are once again going to be critical factors through this hurricane season, in whether tropical storms or hurricanes approach landfall, get degraded by shear, or spin out to sea.

Which is what really matters to reinsurance and ILS as we move into the season and those are factors that are much harder to forecast across the entire season.

A single storm can result in a significant reinsurance, ILS and catastrophe bond market loss, so with elevated activity expected it’s important to have a good understanding of exposure within portfolios and access to tools and hedging to help you manage the risk as the season unfolds.