NFIP reinsurance program could be wiped out by Harvey: Fitch

Fitch Ratings said yesterday that the $1.042 billion reinsurance program of the National Flood Insurance Program’s (NFIP) could face a total loss due to hurricane Harvey, but that having 25 reinsurers on the program meant each companies individual loss would likely be manageable. 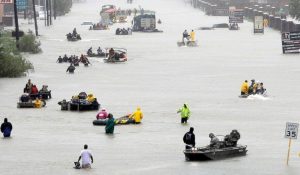 As we wrote earlier this week, with hurricane Harvey’s flooding reaching record levels and the situation worsening in many areas with waters still rising, the National Flood Insurance Program’s (NFIP) reinsurance layer looked increasingly at risk of paying out.

Fitch Ratings said that the impacts of hurricane Harvey would be manageable for property and casualty insurers, with downgrades unlikely as a result of the storm and flooding.

“We believe a large proportion of economic losses will be uninsured or covered by the government’s National Flood Insurance Program (NFIP), as losses are likely to be more heavily flood-related than wind-related,” the rating agency explained.

There will be some differences between Harvey’s losses and other Gulf of Mexico hurricanes, as the flooding is such a huge factor here and will drive uninsured losses much higher.

Insured losses are also set to be more weighted towards commercial lines, again due to the flooding, with “large expected commercial flood and business interruption (BI) losses.”

As a result, from a reinsurance company perspective, losses are expected to mostly fall within primary insurers’ retention levels under catastrophe reinsurance programs, Fitch said, with a small amount ceded to reinsurers.

However the NFIP reinsurance program could be one area that reinsurers see a program totally wiped out, according to Fitch.

Fitch Ratings said; “Given the magnitude of Harvey flooding, reinsurers providing the NFIP with flood reinsurance protection (26% of NFIP losses between $4 billion and $8 billion) could suffer a total loss.

“However, as there are 25 carriers on the program, the loss should be manageable for each reinsurer.”

Should the $1.042 billion NFIP reinsurance program payout in full it will at least prove its worth and demonstrate the benefits of the NFIP leveraging private market risk transfer, although it will likely only be a small proportion of the NFIP’s total bill from Harvey.

It could help to stimulate lawmakers to seriously consider the use of more risk transfer, including both traditional reinsurance and capital market alternatives such as flood catastrophe bonds in the future. It could also result in a larger renewal in January 2018.

But, given that catastrophe losses in the first-half of 2017 were below average for the reinsurance segment, the sector should be able to absorb Harvey-related losses in the second half of the year, the rating agency explained.