Risk modelling firm RMS said late yesterday that its models show that hurricane Harvey may result in economic losses from wind, storm surge and inland flood of as high as $70 billion to $90 billion, with the Houston area floods likely to drive the bulk of these costs.

It’s important to note this is not an estimate of impacts to the insurance or reinsurance industry, rather RMS has analysed the meteorological details of hurricane Harvey, run its models and come to a preliminary assumption that the economic loss could be somewhere in this range of up to $90 billion.

That would make hurricane Harvey the second most costly hurricane to the United States economy after Katrina.

RMS sees the wind and storm surge related loss, which would be the highest percentage insured, as “very modest in our assessment, because the storm did not affect the most highly-developed coastal areas.”

In fact, RMS said that initial analysis suggests that under 10% of the economic loss will be related to wind and storm surge damage to property and offshore energy platforms in the Gulf of Mexico.

So, if that figure for wind and surge economic losses came in around $7 billion to $9 billion then it’s reasonable to expect somewhere around 40% to 50%, perhaps more, could be covered by insurance or reinsurance, we believe.

The vast majority of the economic loss will be from flooding in the Houston metro area, RMS said, with over 7 million properties representing more than $1.5 trillion in value in that area alone.

RMS provided the flood inundation map below to its clients yesterday: 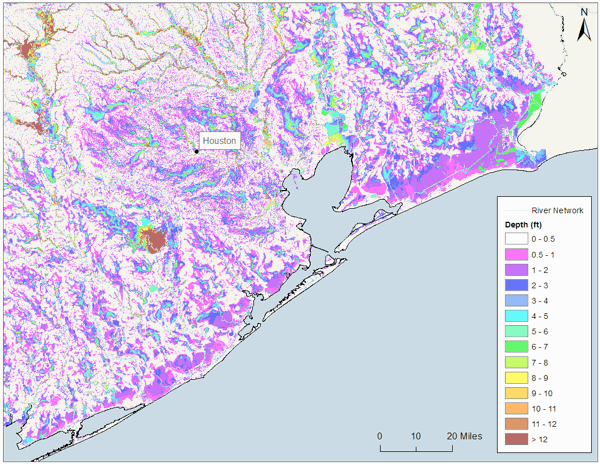 RMS highlights the considerable uncertainty associated with this estimate, given the ongoing nature of the flooding and the fact some waters could take weeks to subside, noting that it will update this economic loss estimate over time.

Michael Young, RMS head of Americas climate risk modeling, commented; “Hurricane Harvey has already broken all U.S. records for tropical cyclone-driven extreme rainfall, with observed cumulative amounts of 51 inches. And with the rain still falling heavily and the waters rising, the situation is too fast-moving to be stating with certainty what the losses in Texas could be.

“We have used the power of the new RMS U.S. High Definition Flood Model to give valuable, preliminary insights to our clients. It will be followed by an official insurance loss estimate in the coming weeks.”

RMS’ models suggest that the overall economic loss will be in the range of $70-90 billion, with the majority of this total uninsured as private flood insurance is limited.

However, RMS notes that despite the fact that the insurance industry loss will remain uncertain for some time, “they will be significant, as private coverage is not consistent: there are significant variations in how coverage is provided by individual insurers.”

On the NFIP, RMS explains that there are around 500,000 NFIP policies that will be affected by hurricane Harvey’s flooding, meaning that the losses to the program will be “very significant” and could be the NFIP’s largest event to date.

Should that be the case then the NFIP’s reinsurance layer will without doubt come into play and the panel of 25 reinsurers providing the $1.042 billion of cover will likely see the layer become a total loss, we’d assume.

Despite this forecast, RMS notes that NFIP penetration rates are as low as 20% in the Houston area, so most of the losses will be uninsured, no matter how significant.