The $1.042 billion reinsurance program of the National Flood Insurance Program (NFIP) looks increasingly likely to be a total loss, as estimates continue to suggest that the hurricane Harvey loss to the NFIP is likely to mean the reinsurance program at least triggers, but most likely pays in full.

The $1 billion flood reinsurance cover will pay 26% of NFIP losses between $4 billion and $8 billion and now catastrophe risk modelling specialists RMS have estimated that the NFIP’s loss will be a minimum of $7 billion and a maximum of $10 billion, suggesting the program is most likely exhausted.

A panel of 25 global reinsurers is set to pay the NFIP under its first ever reinsurance claim. The reinsurance program was purchased in January and was the first proper foray into the reinsurance market for the NFIP. The coverage will demonstrate its worth with hurricane Harvey, which it is to be hoped encourages FEMA to increase the size of it and transfer more risk to the private markets.

Having analysed NFIP portfolio data, RMS believes that the Program’s gross losses will be between $7 billion and $10 billion, with around 40% of those claims from Harris County alone.

The NFIP told Artemis that they had received over 67,000 claims by September 2nd, a number that is likely to have risen considerably since then.

RMS believes that it is not unreasonable to assume an average claim cost of around $65,000, so based on the reported claims that is already over $4.35 billion, putting the reinsurance layer in play, and it is very early days for claims filing still.

RMS anticipates that the NFIP will receive approximately 100,000 to 150,000 claims from hurricane Harvey’s flooding, which will lift the loss well into the reinsurance layer.

Hurricane Harvey could be a top 3 flood loss for the NFIP, putting it up with Katrina and Sandy in terms of impacts. 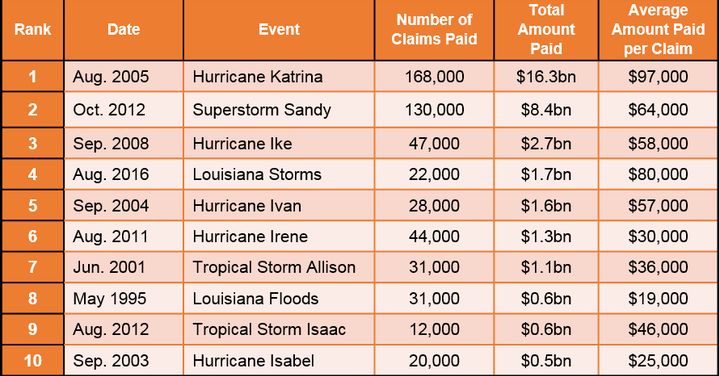 The fact that reinsurance may help to pay some of the NFIP’s claims from Harvey will demonstrate the importance of de-risking the program and diversifying U.S. flood risk into private reinsurance markets. In future this could lead to an increasing amount of the program being transferred to reinsurers and perhaps the capital markets, which will help to make the NFIP more sustainable in the long-run, alongside a gradual privatisation of the primary flood policies.