Nate forecast to reach hurricane strength on track for Gulf coast of U.S.

Updated information on now hurricane Nate can be found here. Tropical storm Nate is set on a course towards the United States, where forecasts predict it will make a Gulf Coast landfall as a hurricane. It’s uncertain how strong or where the landfall could be, but sea temperatures in the Gulf remain conducive to some intensification, making Nate a storm to watch.

Nate is the fourteenth named tropical storm of the 2017 Atlantic season and its forecast could have some in the reinsurance, catastrophe bond and ILS sector rightly concerned.

Tropical storm Nate’s forecast path takes the storm into the Gulf of Mexico where it is expected to intensify to become hurricane Nate prior to a landfall somewhere between Texas and the Florida panhandle. 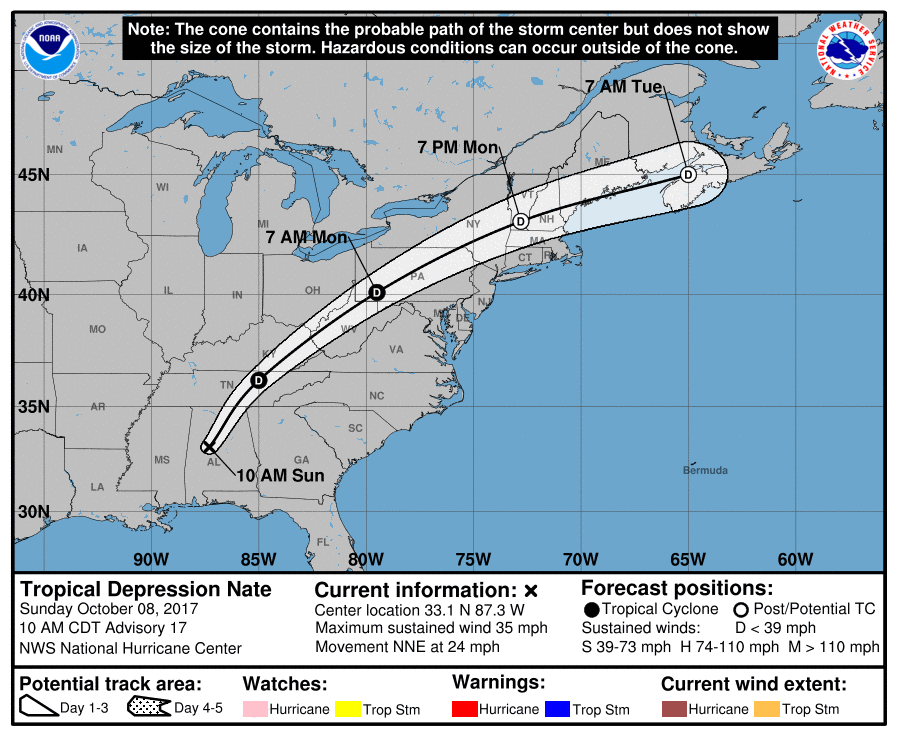 Following the impacts of hurricanes Harvey, Irma and Maria on reinsurance and ILS markets, the prospects of a fourth hurricane landfall will be concerning to many in the industry.

Nate currently has 50 mph sustained winds with higher gusts and a minimum central pressure of 996mb, as at 3:00 PM UTC on October 6th.

Tropical storm Nate has some challenges on its way to achieving hurricane status. The storm has now crossed over Nicaragua and Honduras, and is emerging back over the Caribbean before heading for the Yucatan Peninsula. Once storm Nate has made it across the Yucatan though, it will be crossing over warm seas with plenty of surface temperature to feed its intensification into a hurricane.

At least 22 deaths have been reported in Costa Rica, Nicaragua and Honduras, after heavy rains, landslides and flooding struck the region. Further torrential rainfall has been forecast for the Yucatan area of Mexico and Gulf of Mexico oil platforms are already evacuating workers before Nate’s approach.

The NHC has now raised a hurricane warning for parts of the Louisiana coast including New Orleans.

Meteorologists say that conditions are conducive for a hurricane to form and make landfall somewhere on the Gulf Coast late this weekend coming. The sea surface temperatures in the Gulf are considered just about warm enough to fuel this and wind sheer is slight in the region, meaning there is little in the way of hurricane Nate should it navigate the Yucatan without dissipating.

There remains considerable uncertainty in the forecast for tropical storm or hurricane Nate at this time though, but the main obstacles to future development are the land masses in its path and should it navigate them successfully there is every chance of a hurricane landfall in the Gulf.

Where exactly remains difficult for meteorologists to predict, with some forecast models suggesting anywhere from east Texas to the Florida panhandle. The GFS model runs below center on Louisiana and the New Orleans area currently, as do many of the forecast cones.

Also uncertain is the intensity still (see modelled intensity guidance below), as most models are struggling to factor in how much re-intensification could occur once Nate passes the Yucatan peninsula, or how much the passage over land could degrade the integrity of the storm.

The forecast for Nate will likely be clearer as we move closer to the weekend. The storm is expected to move swiftly through the Gulf once it clear Mexico, which does mean its time to intensify could be limited somewhat.

But whatever happens to its wind-speeds, tropical storm or indeed hurricane Nate will bring significant rain to the region, including New Orleans which still does not have fully working drainage pumps following floods earlier this year.

The reinsurance and ILS market will not like the current forecast and a hurricane Nate threatening the Gulf Coast could stimulate live cat protection buying, as some companies may find themselves a little lacking in certainty over protection layers of reinsurance or ILS that have been impacted by the severe 2017 season already.

Stay tuned to Artemis and we’ll update you. You can track the 2017 hurricane season over at our dedicated page.