More people move into climate risk exposed US regions, than out

It’s always been clear that the coastline is a popular place to live and the high-value homes that are increasingly built in some coastal regions ramp up insured exposure values in the face of storms and hurricanes. But it’s not just on the coasts, as other parts of the United States which are particularly exposed to climate risk factors are also experiencing an increase in population.

Given our reinsurance and insurance-linked securities (ILS) focus, we spend a lot of time considering the build-up of insurable values on the coast of the United States.

States like Florida have enormous concentrations of value in regions highly prone to hurricanes and storm surge, while parts of Manhattan are extremely prone to surface flooding, exposure is everywhere and it continues to rise.

In the face of climate change, insurability of properties exposed to weather related disasters has become a hot topic, with some expecting the exposed coastal regions to become so expensive to insure that property owners will have to begin to bear an increasing proportion of their risks.

But these dynamics may also emerge elsewhere across the United States, as the move into climate exposed regions is outpacing the move out of them, according to data from property brokerage Redfin.

Refin summarises the findings of a recent report as, “The U.S. counties with the largest share of homes facing high heat, drought, fire, flood and storm risk saw their populations grow from 2016-2020 due to migration, while the counties with the smallest share of homes facing climate risk largely saw their populations decline.”

“People have been gravitating to places with severe climate risk because many of these areas are relatively affordable, have lower property taxes, more housing options or access to nature,” explained Redfin Economist Sebastian Sandoval-Olascoaga. “For a lot of people, these benefits seem to outweigh the dangers of climate change. But as natural disasters become more frequent, homeowners in these areas may end up losing property value or face considerable difficulty getting their properties insured against environmental disasters.”

In data terms, Redfin’s analysis shows that the 50 U.S. counties with the largest share of homes facing high heat risk, saw their populations increase by an average of 4.7% from 2016 through 2020 due to positive net migration.

At the same time, the 50 counties with the largest percentage of homes facing high drought, fire, flood and storm risk experienced average population growth of 3.5%, 3%, 1.9% and 0.4%, as well.

This net positive migration appears to be coming out of areas that are less exposed to climate related risks, in the majority of cases.

The graphic below from Redfin shows that the one outlier here is actually storm risk, as more people moved into areas where fewer homes are exposed to storm risk, than into those where the storm exposure is greater. 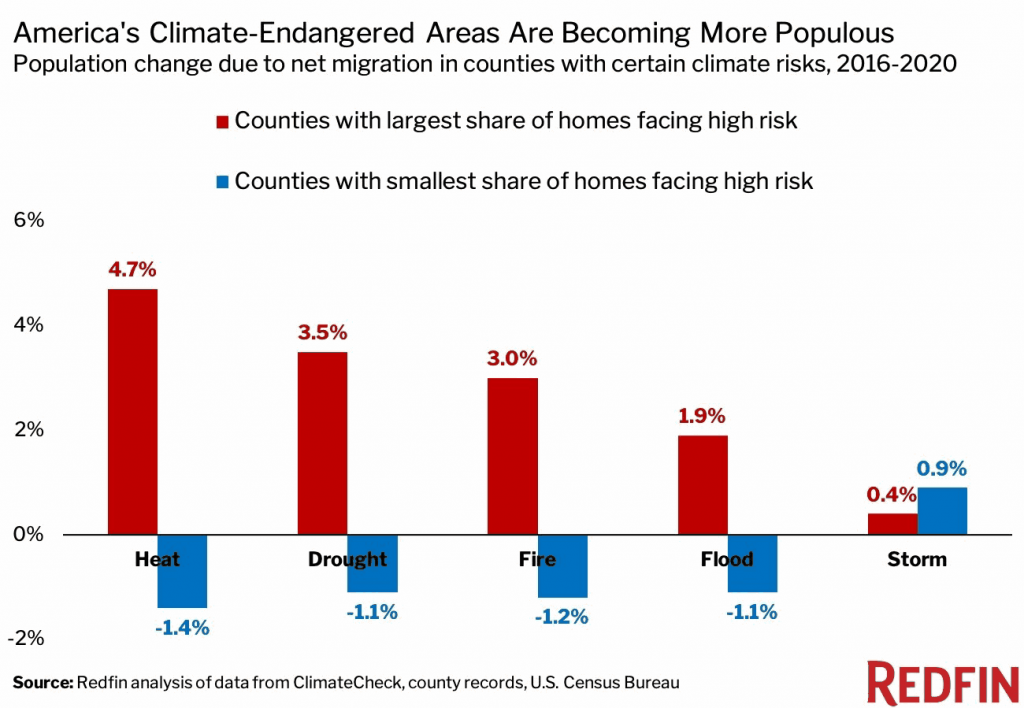 A previous Redfin survey had shown that an increasing frequency or intensity of natural disasters is a consideration for almost half of respondents who planned to move homes in the next year.

Which shows that catastrophe and climate risk is certainly being considered.

But, as yet, it’s not become a sufficiently significant factor in people’s choices over where to live to prevent them moving into regions with higher climate related risks.

These shifts in property demand are both creating more exposure in climate exposed regions of the US, while also creating increasing values at risk in some others, such as the coast.

Two factors may begin to move the data over the coming decades.

Second, the insurability factor. This is likely to be key in the coastal regions and perhaps already is in certain parts of Florida, where property insurance rates have soared in recent years. We could see similar in other regions, the wildfires in California have demonstrated that.

But there is always a lag in these effects. It’s not as if people are going to suddenly migrate and leave their homes en mass.

Meaning resilience building is another key factor that can enable people to remain comfortable in locations of higher climate or severe weather risk.

Of course, all of this also drives home the need for increasing amounts of risk capital, insurance, reinsurance and from the capital markets, to support the ability of homeowners and asset owners to remain in locations where risks may be increasing.

Risk capital and risk transfer are critical to enable society to continue to live and operate in areas of higher risk and if more people are exposing themselves to climate risks, through their choices of home location, then more risk capital is likely to be required.

At the same time, insurance products are going to need to change to support societies need for climate risk protection.

For the insurance, reinsurance and ILS industry, it’s not just the increasing risks that need to be understood, it’s also the changes in society, as people move to live and work from different locations.

I’m sure when we see another set of this data from Redfin in the years to come, it will show another pronounced shift around the time of the pandemic, as people moved out of cities and into other locations, which in some cases may have ended up in them amplifying the climate risks they faced.

Redfin has more data on this available on its website.