Update: ICEYE released an update to this data, showing that the minimum number of buildings thought impacted by the flood is nearing 72,000.

ICEYE has a constellation of synthetic aperture radar satellites and its Flood Monitoring Solution offers the insurance and reinsurance industry a near real-time flood extent and depth data product, with resolution at the building level, all available within 24 hours of a flood event.

The company has shared some insights into what its flood monitoring product shows for the recent flooding that hit central and western Europe.

First, the data, as ICEYE’s flood extent mapping suggests a minimum of 43,400 buildings will have been impacted by the flooding in total across Europe.

The numbers in Germany are expected to rise, while others may change as ICEYE updates its insights.

The higher the flood water level, the larger the average claim is likely to be, would seem a sensible way to look at this. Although likely not always the case, as some outliers such as industrial buildings could be shuttered for weeks after just a low level flood depth, driving business interruption claims.

ICEYE’s flood monitoring team tracked the weather systems that triggered the flood event as they developed and its satellite constellation captured synthetic aperture radar (SAR) imagery across the impacted regions in advance of flood peaks across Europe.

ICEYE monitored the developing flooding across the six separate countries, combining the SAR imagery with other data sets, including aerial imagery, open-source images, river/tidal gauge data, watersheds, and digital elevation models, to perform a rapid analysis of the flood extent and depth for most affected regions, including level of depth for individual buildings.

A sample ICEYE visualisation from these floods for Bad Neuenahr-Ahrweiler, Germany can be seen below, showing a total of 2,907 buildings within the flood extent. 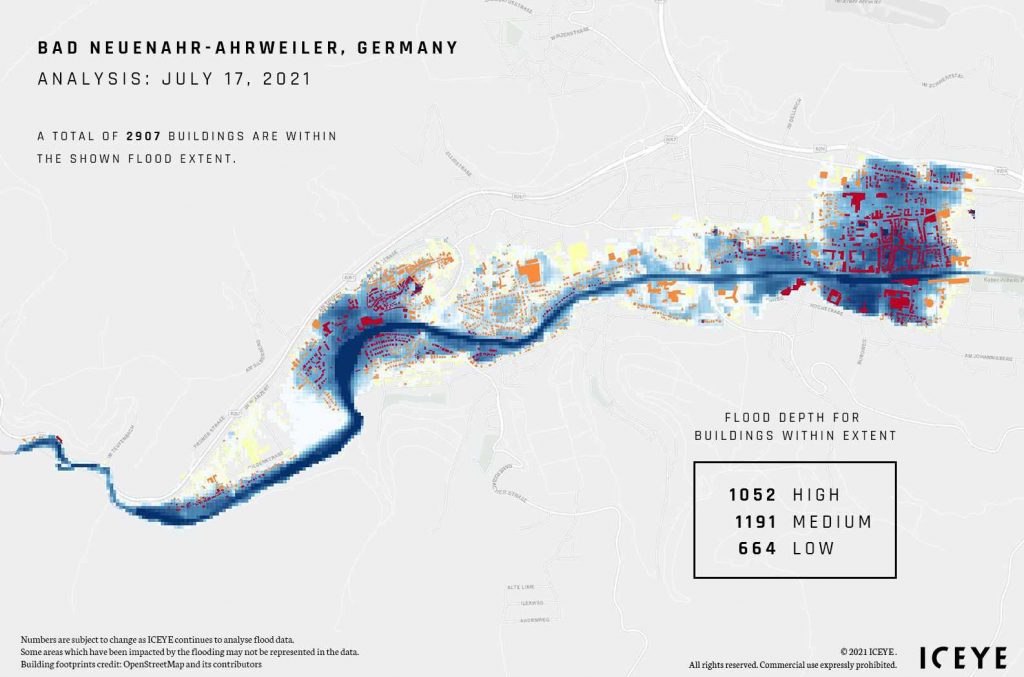 “The ICEYE flood monitoring team identified the potential for a significant flooding event in the region five days before the flooding commenced, as the weather models and our flood forecast data indicated heavy rain, over a relatively short period of time, and on top of already-saturated ground.

“Once the potential flooding event was identified, we created plans to capture extensive synthetic aperture radar (SAR) imagery of the areas most likely to be impacted: Belgium, France, Germany, Luxembourg, The Netherlands and Switzerland. To date on this flood event, we have imaged and analyzed an area of more than 90,000 km².”

“By providing this data within 24 hours from the high water mark, we enable insurers to reach out to impacted customers, deploy field resources effectively, and process claims faster and more efficiently immediately after the event.”

This kind of data is extremely useful in helping insurance and reinsurance market participants more quickly understand the impacts of a flood event and as ICEYE owns its own satellite constellation its approach is entirely proprietary and results can be delivered very quickly to clients.

Flood insurance claims to residential properties seem to average in the region of US $40,000 to US $70,000, based on data from the US, UK and Germany.

But commercial property flood insurance claims can be significantly higher in some cases, especially where business interruption is added to pure property damage claims.

Even on the average residential claim, it is very easy to get up to the EUR 2 billion aggregate claims mark, but with commercial and industrial property claims as well added in, plus interruption to businesses, it’s very easy to foresee the industry total reaching up into the EUR 4 billion plus region, based on the minimum numbers of properties believed impacted by the floods, according to ICEYE’s data.

Which aligns with the current insurance and reinsurance market loss estimates, which appear to be ranging from EUR 2.5 billion up to EUR 5 billion, perhaps a little higher, at this time.