Alternative reinsurance capital levels, largely from insurance-linked securities (ILS), has once again increased over the last quarter of record as reported by broker Aon, to reach $96 billion as of the end of March 2021, with collateralized reinsurance returning to growth.

Alternative reinsurance capital grew by another $2 billion in the quarter to March 31st 2021, according to Aon’s data, on the heels of $2 billion of market growth in the fourth-quarter of 2020 to $94 billion. That followed alternative capital markets adding $1 billion in the third-quarter to reach $92 billion.

The broker’s analysis categorises alternative reinsurance as the capital supplied by insurance-linked securities (ILS) funds and structures, as well as in instruments such as catastrophe bonds, collateralized reinsurance vehicles and sidecars.

The market had shrunk in recent years, on the back of consecutive periods of heavy catastrophe loss activity. But now, with rates firmer and the ILS market having responded to challenges faced, the return to growth has been sustained across three consecutive quarters.

Overall, Aon’s data shows that global reinsurance capital remained unchanged at US $650 billion at the end of March, as traditional capital contracted by $2 billion, but alternative capital filled that gap. 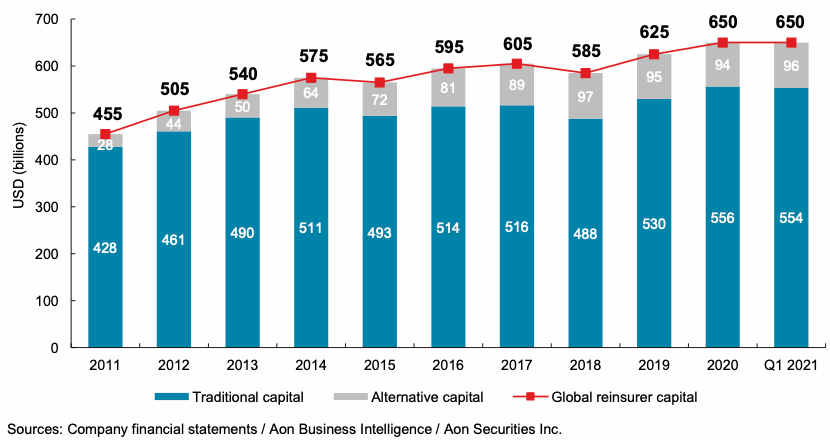 At $96 billion, alternative reinsurance capital is now higher that at any point since 2018, when Aon recorded it as reaching $97 billion.

The recovery is truly underway, with the market now looking likely to reach or surpass that figure perhaps as soon as Aon’s next reporting of this data, as of the mid-point of 2021, especially when you consider the very active catastrophe bond market plus opportunities for ILS fund growth at renewals.

Interestingly and encouragingly for the ILS sector, Aon also provides a chart breaking down alternative reinsurance capital by type of ILS structure it is deployed through and it appears the broker believes that collateralized reinsurance has now returned to growth.

The above is the first chart from Aon’s reports to have shown collateralized reinsurance market to be expanding in any meaningful way since as far back as 2018.

This is extremely positive, as it shows ILS fund managers attracting new inflows not just to their catastrophe bond strategies, which have been growing strongly lately, but also to their collateralized reinsurance, or private ILS, fund strategies as well.

When Aon next reports, on this data as of the mid-year, we’d expect to see further growth in catastrophe bond capital, as well as in collateralized reinsurance, which combined might take the total $96 billion back to the $97 billion high, or perhaps even above.

The alternative reinsurance capital, or ILS market, has now expanded by more than 4% over the last few quarters and if that rate of growth persists, alongside record catastrophe bond issuance over the rest of this year (entirely possible), we could perhaps see this measure of the market’s size reaching $100 billion within six months or so’s time.