A magnitude 7.0 earthquake has struck the Pacific coast of Mexico close to the tourist heavy area of Acapulco. At this stage, it appears the World Bank facilitated IBRD / FONDEN 2020 parametric catastrophe bond that provides the Mexican government with earthquake insurance protection is safe from loss, but it is hard to be certain on the limited information available to us. 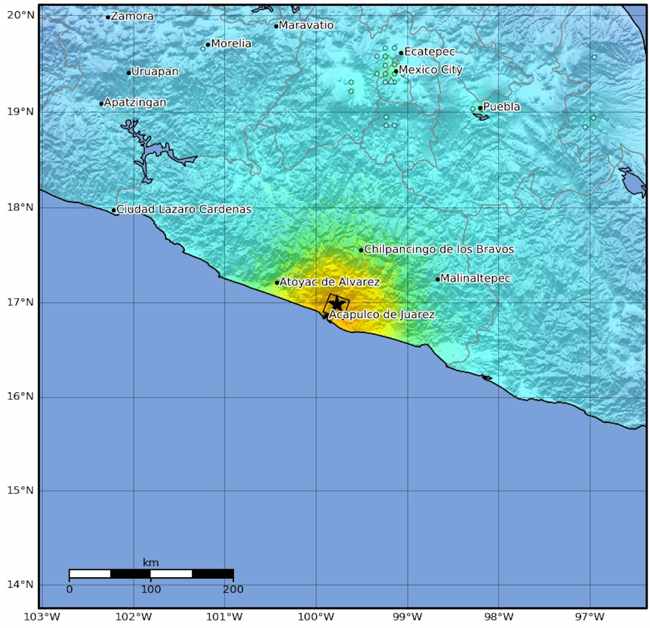 Two tranches of the cat bond notes issued for the FONDEN 2020 deal are exposed to earthquake risks, providing $235 million of earthquake insurance protection, on a parametric trigger basis.

The Class A tranche is a lower risk layer of earthquake protection and on our analysis of the cat bond deal information we have regarding the trigger this tranche appears safe from loss, as they would require a much larger earthquake to occur near Acapulco to trouble the notes.

But the Class B tranche, which is $60 million in size, is far riskier and so requires a less powerful earthquake to trigger it in the region around Acapulco.

That said, at this stage, based on the limited information we have available, it appears the Class B notes will avoid loss, as the parametric trigger appears to be constructed in order to require a more powerful quake to occur in the parametric boxes in thee Acapulco region.

But it is hard to tell, as all we have is a map showing parametric boxes and colour-coding to define what magnitude of quake would be required to trigger either a 25%, 50%, 75% or 100% loss of principle, which you can see an image of below. 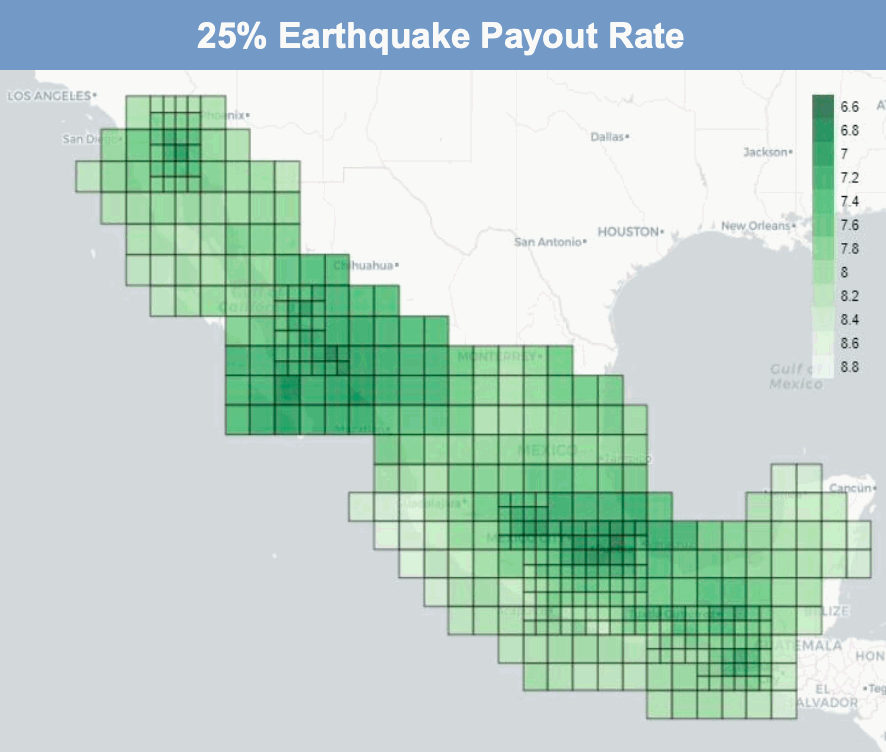 This image (above) shows the colouration of parametric boxes for a 25% payout to be triggered to the Class B riskier earthquake linked notes of this catastrophe bond.

It looks to us as if for a trigger event to occur in the region of Acapulco where today’s M7.0 earthquake has struck, that a far more powerful M7.6 or stronger earthquake would be required to trigger any losses to the layer.

On which basis, as this is the riskiest layer exposed to the quake and the 25% payout requires the weaker events, we feel the notes should be safe from loss.

Damage has been reported from a number of hotels in the Acapulco region, while power cuts have been widely reported and further damage experienced in towns and villages in the surrounding area.

Aftershocks are now being felt in the region. But at this time it appears this won’t be a particularly significant insurance or reinsurance market event, while the World Bank facilitated catastrophe bond looks to be safe from any loss (based on our initial analysis).

It is possible for a quake of M6.6 or greater to cause a triggering event, but for anything lower than an M7.2 to trigger it seems a quake would be required to occur far closer to major urban centres such as Mexico City.

Although we must reiterate that our information is limited, so we’d encourage investors and cat bond fund managers to make their own analyses of the quake and its potential implications for the FONDEN catastrophe bond.

Update: One of our sources has told us that, based on the USGS information on the location and depth of today’s earthquake it fell into a parametric box that would have required a quake of M7.7 or stronger to trigger the riskier Class B notes, or M8.3 or stronger for the Class A’s.

The depth of today’s quake, at 12km, was within the bounds required (up to 120km). So the earthquake near Acapulco passed the parametric trigger’s depth test, but failed the intensity test, meaning that the cat bond is expected to remain free from loss.

Previously, Mexico’s government collected from its 2017 FONDEN cat bond issuance after a M8.1 earthquake triggered the notes, causing a full $150 million payout of one tranche of notes.

You can read all about this new IBRD / FONDEN 2020 catastrophe bond and every other cat bond transaction in the Artemis Deal Directory.