Meranti a reminder of ILS potential in China, but unlikely a huge loss: RMS

Super typhoon Meranti’s impact on China today provides a timely reminder of the opportunity for the insurance-linked securities (ILS) market in China, although it is unlikely to cause any significant loss to exposed collateralised reinsurance contracts, according to Ben Brookes of RMS. 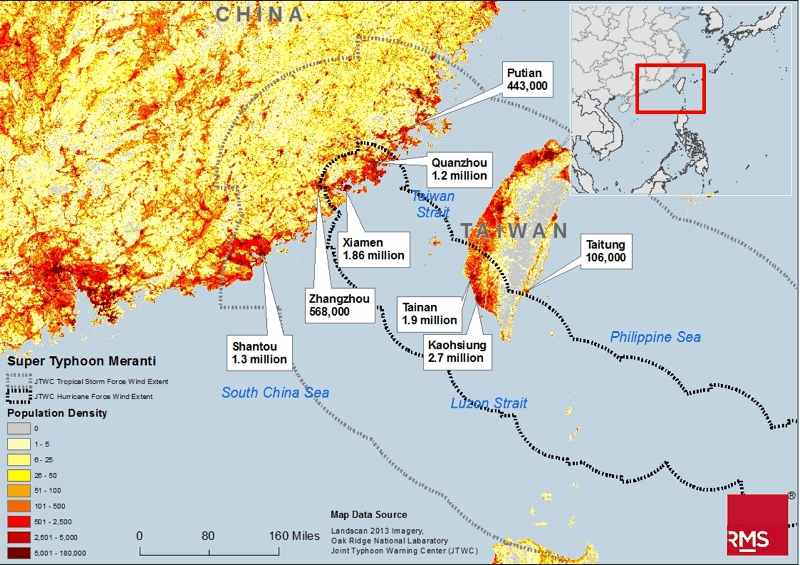 Robert Muir-Wood, Chief Research Officer at RMS, explained typhoon Meranti’s impacts; “Meranti, the strongest typhoon this year, has struck Taiwan and China with a triple-whammy of typhoon-related perils: a combination of wind, flood and storm surge. The storm has now moved inland and weakened, while continuing to produce high rainfall totals and flooding. We expect damage in China to be higher than Taiwan, due to the mainland’s higher concentrations of coastal exposures and population. While the storm at Cat 4 intensity skirted the southern end of Taiwan island, it made a direct hit at Cat 3 intensity on the mainland. Close to the point of landfall in the island port of Xiamen there has been quite significant wind damage, including to the windows of high rise buildings in addition to the more familiar rainfall related and storm surge flooding.

“Southeast Asia is disaster central for catastrophic events and suffers frequent typhoons, though Taiwan is generally well-equipped and prepared to deal with these storms and has good coastal defenses to mitigate against surge. Economic losses from typhoons in Taiwan tend to be limited since typhoons, including Meranti, approach from the east in this region while exposures are concentrated in the west of the island.

“For Meranti, high winds affected the port and industrial cities of in Kaohsiung and Tainan in southwest Taiwan. Here the industrial clusters are dominated by the light industrial electronic, semiconductor and the bio-tech sectors. The buildings in these sectors are generally designed to withstand typical extreme typhoon winds and from our field surveys we have found that buildings in industrial parks are sited on elevated ground to minimize flood risk, while the buildings themselves have stepped entrances, which further increases protection against flooding. While Meranti skirted past the east coast of Taiwan, early indications are that hurricane force winds toppled some cargo containers in the Kaohsiung port, while some ships have come unmoored. The industrial clusters may also have suffered peripheral impacts.

“For China the low take-up rates for wind and flood insurance will limit the insurance impacts of the storm. However, this was the strongest storm to hit Xiamen in more than sixty years and something like a ten-year return period storm for this section of the Southeast China coastline.”

Meanwhile, Ben Brookes, Vice President, capital markets at RMS, explained that the ILS market could have some exposure through collateralised property catastrophe reinsurance contracts, albeit small.

“Any ILS exposure to China Typhoon will probably be via the more global collateralised re contracts and in more diversified portfolios – but even then it’s likely to be in very small proportions so losses from Meranti are not going to be of much concern for ILS investors,” Brookes said.

The ILS market is becoming increasingly exposed to Chinese property catastrophe risks through the expansion of ILS funds participation in global reinsurance markets via collateralised products.

Additionally, some ILS investors may have low levels of exposure to Chinese catastrophe risks through ILS structures such as reinsurance sidecars, particularly those retrocessional sidecars from large global reinsurers.

Third-party and ILS capital backed retrocessional reinsurance funds could also see some slight exposure, or at least have assets at risk in China.

While any loss will be small from Meranti and the local insurance market plus global traditional reinsurance market is likely to take the bulk of the typhoon’s losses (although they won’t be huge given the low penetration of insurance still in China), such events are a reminder of the need for more disaster risk transfer in China and the opportunity for the ILS market to finance a portion of that as the market grows.

Brookes explained; “Meranti is, however, yet another reminder of the huge potential for ILS in the region. It would be relatively straightforward to put parametric protection in place for an event like this. Category 4 and 5 storms that have the potential to strike regions of high populations and exposures are exactly the type of event such protection can be designed for, particularly if issued by a state sponsor.”

Growing in life insurance risk as an asset class and helping re/insurers with their Solvency II capital needs by delivering...