A magnitude 6.2 earthquake has struck overnight in the Umbria area of Italy, with early reports of 10 deaths, people still trapped and widespread damage to buildings and structures in the affected region.

The M6.2 earthquake struck at around 03.36am local time at a relatively shallow depth of 10km, at a distance of 10km from the Umbrian town of Norcia, which is 76 km southeast of the city of Perugia.

Widespread shaking was felt, with news reports saying some buildings as far away as Rome shook for 20 seconds due to the earthquake. 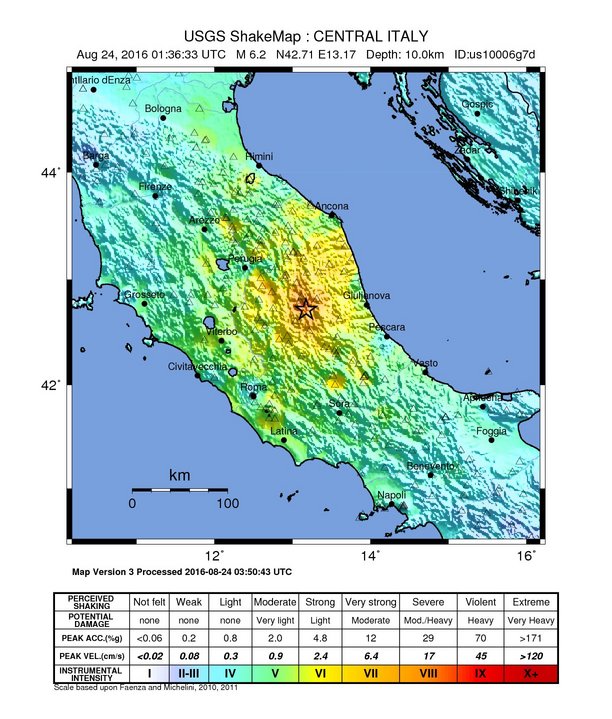 The initial earthquake was followed by a magnitude 5.5 aftershock, again at a shallow depth of 10km.

While property insurance is perhaps not as widely purchased in Italy as in some other European countries, there is certainly exposure for reinsurance and ILS markets to this event. It’s worth stressing here that exposure does not necessarily mean losses, as it is too early to establish any magnitude of industry loss.

The only Italian earthquake catastrophe bond, the 2015 Azzurro Re I Limited which provides €200m of protection to insurer UnipolSai Assicurazioni S.p.A. and likely a number of collateralised reinsurance or private ILS layers exposed to the event.

Update: ILS investment manager Plenum Investments said that it does not anticipate any loss for the Azzurro Re I catastrophe bond.

It’s far too early for any estimates of losses to the insurance, reinsurance and ILS industry, but news footage shows damage levels will certainly result in a reasonably sized insured loss, with the potential to result in some reinsurance program claims.

Early reports suggest widespread damage to towns in the surrounding area, with the Mayor of the town of Amatrice telling local radio that his town was “almost half gone.” 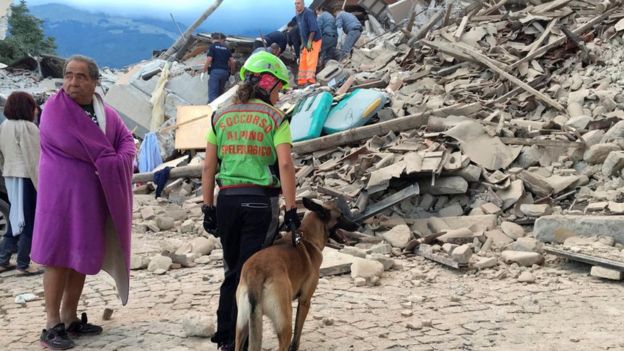 A number of deaths have been reported, with some news reports suggesting 10, but there are other reports of people trapped beneath rubble, so the figure could rise sadly.

Italy is exposed to earthquakes, with the last major quake being in 2009 when a 6.3 quake struck the Aquila region, killing as many as 300 people.

For the insurance-linked securities (ILS) and catastrophe bond investments sector this earthquake will deserve some analysis this morning, as ILS fund managers and investors will seek to understand whether there is any exposure to their portfolios.

The Azzurro Re I cat bond is clearly exposed to an earthquake such as this. However, a look at some of the documentation associated with this catastrophe bond shows that the highest concentrations of risk associated with this bond are cities further north in Italy, or directly around the capital of Rome.

That said, stochastic risk modelling data shows that the Azzurro Re I cat bond could pay out for a modelled magnitude 6.0 earthquake, if it struck the regions where the risk is most concentrated. Historical risk modelling shows that no previous quake would have caused a payout though, including a 6.1 in the Umbria region.

So it is likely that a much larger quake would be required to cause a loss to Azzurro Re I, but this cat bond cannot immediately be considered risk free from the quake until more information on the extent of the damage emerges.

The Azzurro Re I cat bond features an indemnity trigger that attaches at €500m of losses to UnipolSai, paying reinsurance claims on a per-occurrence basis up to an exhaustion point of €700m.

The region of Umbria contributes just 0.2% of the modelled expected loss, which perhaps suggests that any quake here would need to be larger than this if it was to worry the cat bond. However, Marche, the next closest region contributes 1.2% of the expected loss and Lazio region to the south (surrounding Rome) 6.4%.

While the Azzurro Re I catastrophe bond is exposed, it is likely that traditional and collateralised reinsurance contracts would kick in and begin paying out first, if the damage is sufficient to reach those layers.

It’s still very early days and reports of damage are coming through all the time in the Italian press. With earthquake losses often slower to be filed, due to structural damage not always being immediately apparent in buildings further from the epicenter, it could be some days before any estimates emerge.

In May 2012, two Emilia-Romagna region earthquakes, an M6.1 and M5.8, caused a combined economic loss of around $16 billion and an insurance industry loss of $1.8 billion, according to data from Aon Benfield. The brokers Impact Forecasting unit also explained that a magnitude-6.2 earthquake that struck the same region in April 2009 damaged or destroyed some 15,000 structures, resulting in economic losses of nearly $3 billion (2016 USD). However the insured loss was much lower, at $560 million (2016 USD).

At the moment, looking at the location and extent of damage, it seems more likely that any reinsurance losses would be borne by traditional markets, some collateralised participation in programs and perhaps some retrocession layers. But we have to stress that it is very early and the picture will become clearer in the next few days.

PERILS AG, the Zurich based provider of insurance industry loss data and estimates, does cover Italian earthquakes and there is a good chance that this event will at least be investigated by PERILS and perhaps reported on, which will help to provide greater visibility of the ultimate industry loss for insurance and reinsurance to pay.

It’s worth highlighting that earthquakes are complex catastrophes and losses can take significant time to emerge, as has been witnessed in New Zealand recently.

We will update you as and when any further information emerges.