While hurricane Laura was intensifying rapidly on its path towards the Gulf Coast, insurtech firm Tremor Technologies ran a series of industry loss warranty (ILW) auctions, but no trades were made as the market assumed the loss would not be significant enough to warrant the added coverage. 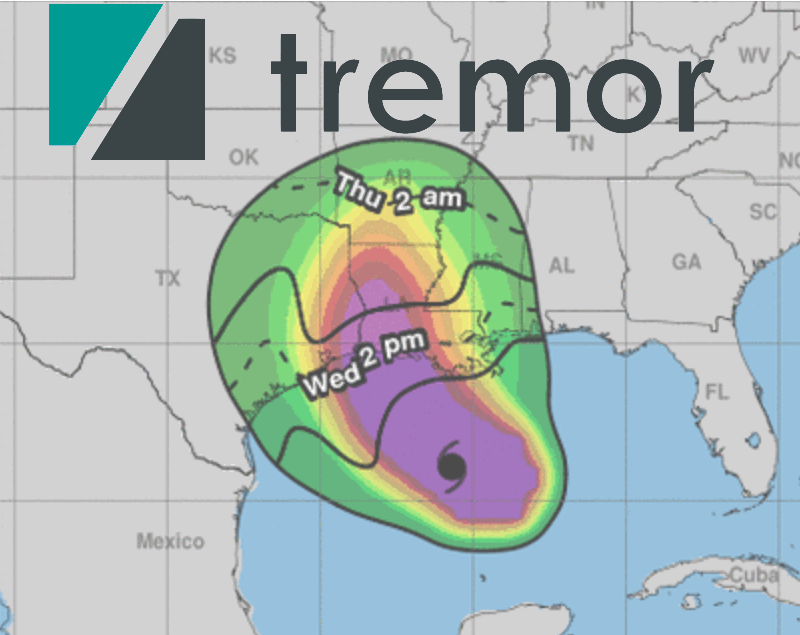 Interest in trading live cat ILW protection had risen on the uncertainty over exactly where hurricane Laura would track, especially should the path have shifted west towards Galveston and Houston, Texas.

But as the forecasts continued to push for the eventual Louisiana landfall scenario that transpired, markets weren’t ready to buy protection at most trigger levels it seems.

Sean Bourgeois, Founder and CEO of Tremor Technologies, the insurtech company that offers a technology-based programmatic insurance and reinsurance risk transfer marketplace, explained how his company responded to the markets need for greater access to trading and pricing at a stressed time when a storm was in the water.

“Yesterday was a fast paced exciting day at Tremor. We offered three opportunities to trade three structures during the afternoon, a $10, $20 and $50b trigger named storm ILW,” Bourgeois explained.

The response from the market to this opportunity to see real-time availability and pricing of capacity when a hurricane was approaching was positive, it seems.

Bourgeois said, “We had dozens of buyers and sellers login throughout the afternoon, both traditional reinsurers and ILS funds.”

But the track of hurricane Laura was all important in getting buyers on the hook.

“As the storm veered away from the Houston area, the feedback we got from both sides was that they felt the industry loss would not reach the first trigger so we did not clear trades.

“Had the storm veered westward I am quite sure there would have been bids and offers submitted based on the post auction feedback we received,” Bourgeois continued.

What’s important here was the fact if they’d wanted to buy, they could have and easily. With capacity displayed for a range of industry loss triggers, which they could easily have accepted and then taken towards deal execution.

That’s a really important learning lesson for reinsurance and retrocession buyers, that there are now technologies that can make capacity available more effectively and more efficiently also display the adjustments in supply, demand and pricing as live catastrophe events progress.

Bourgeois also said, “All participants appreciated the venue and we believe our role in future live cat scenarios will be an important one. Our ability to not only spin up a market and clear trades in a matter of hours but to also offer rich buying and selling bidding capabilities with transparent data is unique and valued.

“As you know on Tremor, we offer ILW trading whereby buyers and sellers are not revealed to each other until a trade clears while individual bidding preferences are never revealed – this allows everyone to trade discreetly and in confidence with on demand liquidity.

“We are excited about future opportunities and stand ready to spin up another live cat market as soon as required.”

It’s not surprising no trades were made. We hear from our sources that the live cat ILW market also failed to execute trades, given the uncertainty over the track and then the expectation that the Louisiana landfall would be a lower industry loss scenario.

Of course, hurricane Laura did intensify right up to that landfall, so it’s hard now to say whether the $10 billion industry trigger will be breached or not.

But the market does continue to speak about double digit billion industry losses as a possibility with Laura, so it’s possible those who turned away from buying at the $10 billion trigger level may be disappointed if that comes to pass.

We asked yesterday in an article, why it isn’t simpler to “get fast, near-instant, access to a range of quotes on the industry-loss warranty (ILW) capacity available in the market that it is actually possible to buy?”

Well now it is, but still you need both sides to meet over the deal and the stars to align for trades to get done, just the same as you do in a face-to-face or over-the-counter manner.

We understand pricing indications were above 20% rate-on-line for the $20 billion industry trigger level in Tremor’s auctions.

– Hurricane Laura analogues cited at up to $6bn insured loss by RMS.