Payouts from Japanese domestic and foreign insurance companies for damage to dwellings from the earthquake that struck the Kumamoto region of Kyushu, Japan in April have already passed $1.13 billion and are expected to rise much further. 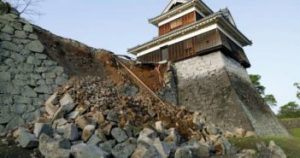 The figure released by the General Insurance Association of Japan (GIAJ) makes the Kumamoto earthquakes the second largest insurance payout from a quake in Japanese history, after the 2011 Tohoku quake.

The General Insurance Association of Japan (GIAJ) reports that 171,942 claims enquiries were filed from the twin earthquakes that struck the region. Of those 84,422 became cases that have been settled and 76,580 insurance claim payments made, totaling JPY 123.4 billion, which is roughly US$1.13 billion.

That suggests that there are a significant number of additional enquiries to be settled, on which additional claims payments could be made which might take the final tally for earthquake damage to dwellings much higher.

Being “Earthquake Insurance on Dwelling Risks” as the GIAJ describes these claims payment figures, it suggest that this does not include any commercial property claims, business interruption, agriculture, infrastructure or other types of property related damages which could also hit insurance and perhaps reinsurance capital providers.

Risk modeller RMS recently put its estimate for the insurance industry loss from the Kumamoto quakes at up to US$1.2 billion, a number that is clearly going to be surpassed when all insurance or reinsurance related losses are taken into account, based on this new information.

Aon Benfield put the insurance and reinsurance loss from the quakes at likely over US$2 billion, while AIR Worldwide said up to US$2.9 billion.

The differences in estimates relates to the different types of coverage estimated for, and a proportion of the dwelling claims are likely to be dealt with by the Japanese government as the reinsurance capital provider of last resort for many homeowners.

The latest figures from the GIAJ demonstrate that the final insurance and reinsurance related loss is likely to be towards the upper end of even the high estimates and that when all commercial, agricultural and business interruption related insured losses are taken into account the final toll could be much higher (especially when considering risks insured or reinsured by the government).

The current insurance payouts made of US$1.13 billion makes the Kumamoto earthquakes a more expensive loss for the insurance and reinsurance industry than 1995’s Kobe quake.

The Kobe quake had been estimated to have cost domestic Japanese insurers around US$3 billion, with a similar amount said to have been paid by international insurance and reinsurance markets and an estimated insurance industry loss of US$6 billion, while the government paid around US$800m for residential earthquake insurance claims.

So the figures from the GIAJ seem likely to cover off the residential claims and the question now is how high the payments by international insurance and reinsurance markets, as well as by domestic insurers, for commercial risks and items such as business interruption may rise to.

For reinsurance and retrocession markets, as well as ILS funds and any sidecars with exposure, it’s going to be the total insurance related loss that matters (excluding government paid claims). It could be some time before we understand the true extent of this loss. While estimates vary due to methodologies and what is included in them it’s important to remember that the industry will likely pay more than these figures suggest.

« Older article Emerging markets key to insurance growth over next decade: Munich Re