Japan has been hit by torrential rainfall in recent days resulting in some of the worst flooding seen in history, with now more than 125 people confirmed as having died in the event and widespread damage to homes and businesses. 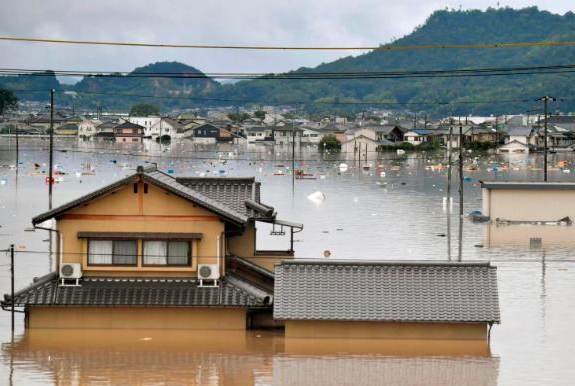 Meteorological authorities said that the flooding in the west and south-west of Japan could be the “worst weather disaster” Japan has experienced in decades, with prospects now rising that a substantial hit could be taken by insurers, leading to potential for some impact to reinsurance capital that supports the domestic Japanese insurance giants.

Some areas in western Japan are said to have received three times their usual rainfall for the whole of July already and there is more rainfall on the way. One location, the city of Uwajima, received more than 14 inches of rainfall in a two hour period, demonstrating the severity of the downpour and the potential for flash floods and landslides.

The latest reports suggest that as many as 12,000 private and public structures have been inundated by the floods, across both homes and commercial properties.

Flood insurance in Japan is voluntary and largely bundled with homeowner or commercial property insurance policies. A survey undertaken in 2000 found that as many as 49% of Japanese homes had specific flood coverage, a percentage that is likely to be higher today.

Numerous homes are said to have been destroyed by landslides, which were at their worst in the Hiroshima region of Japan, with many more damaged by flood waters.

Businesses have also been hard hit and there is expected to be an element of business interruption to the eventual insurance and perhaps reinsurance losses that result from the torrential rains and flooding.

Major factories for the automotive industry have been forced to close, with car makers as large as Daihatsu, Toyota, Mazda and Mitsubishi all having closed factories due to the flooding.

Other major companies such as agricultural equipment manufacturer Kubota and electronic giant Panasonic have also shuttered some operations in the affected region.

125 were confirmed dead this morning with another 50 missing, according to reports, with tens of thousands of people displaced by the flood waters. At one point there was an evacuation order in place for up to 2 million people, which reflects the scale of the Japanese flooding disaster.

In one district of Okayama prefecture alone it was said that at least 4,600 homes were inundated by flooding and a third of the district submerged. Auto damage is also expected to be a significant factor in the eventual costs of the flooding. Overall, 12,000 structures are thought to have been severely damaged by the flooding, a figure that is likely to rise.

Reinsurance broker Aon said that economic losses will be well into the hundreds of millions of dollars, likely much higher. It’s too early for insured loss estimates at this stage.

The flooding is on a scale not seen for years and is likely to result in a hit to insurance and some international reinsurance interests.

The ILS fund market and collateralized reinsurers may have some exposure, if the flooding causes sufficient losses to the major primary insurers for them to begin claiming on their property reinsurance programs.

There if Japanese flood risk in the catastrophe bond market as well, but this is largely typhoon linked except for the one recent cat bond from MS&AD, the $320 million Akibare Re Ltd. (Series 2018-1) deal, which is the first cat bond to cover Japanese floods as a discrete peril.

With flood waters still high and more rainfall forecast it is likely that initial estimates of the economic and insured loss from the Japanese floods won’t be available for some days to come.