Insurers push for end to commercial P&C rate decline, 1% down in July

U.S. commercial P&C rates declined by an average of 1% in July 2016, in line with the 1% reduction witnessed in June as insurers continue to push for an end to any further rate reductions, according to market commentary from MarketScout and Keefe, Bruyette & Woods (KBW).

After two consecutive months of U.S. commercial P&C rate declines of 2% in May and April, the trend of declines continued in June, albeit at a slower rate, with rates down by an average of 1% and July has followed suit.

“While insurers continue to grant minor rating concessions, many are pushing for an end to any further rate reductions. Transportation underwriters are increasing pricing on all but the very best accounts.

“The poor loss experience in transportation has prompted underwriters to demand rate increases and restrict underwriting appetite. Insureds who cannot convince underwriters they can control losses are left with few options and ultimately end up paying a much higher rate/premium which impacts their profit margins,” said Richard Kerr, Chief Executive Officer (CEO) of MarketScout.

Rates in the global insurance and reinsurance marketplace have been in decline for some time, as competition, ample capacity and a low interest rate environment continues to hinder profitability and drive down rates.

Kerr has noted in more recent months that there’s evidence of increased discipline from insurers in an effort to cease rate reductions, and it appears this trend continued in July.

Artemis discussed last month how a push from insurers to put a stop to further rate reductions was positive news for global reinsurance and insurance-linked securities (ILS) players, as they could find pressures on their own rates subside in response to the push from insurers.

“For the first time in a while, we are hearing from insureds, mostly in the transportation industry for now, who are complaining about lack of cooperation from insurers as they try to manage their risk portfolio.

“Business owners and corporate CEOs are concerned their insurance premiums will be larger than what was budgeted therefore negatively impacting net profits. These insureds would be well advised to allocate capital towards implementing loss control and companywide safety programs. That is how they will get cooperation from their insurers,” continued Kerr. 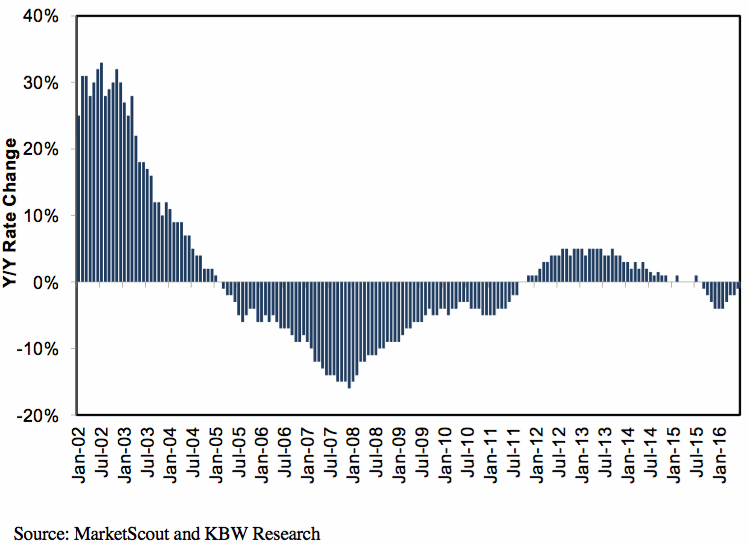 As highlighted by the above chart provided by KBW, rates movements have been negative since September 2015, and have decelerated since February 2016. KBW added that “rate decreases still trail even benign loss cost inflation, so accident-year underwriting margins will almost certainly contract, dependent upon individual companies’ loss reserving conservatism.”

Finally, jumbo (over $1 million) sized accounts declined by an average of 3% in July, the same as witnessed in June 2016.

MarketScout’s barometer also offers insight into average rate movements by coverage class, which reveals that during July 2016 commercial property and workers’ compensation declined by an average of 2%. Business interruption, BOP, general liability, D&O liability, Fiduciary, and surety were flat in the month.

Inland marine, umbrella/excess, and professional liability declined by an average of 1%, while EPLI and crime recorded average rate movements of plus 1% in the period. Finally, commercial auto reported an average rate increase of plus 2% in July 2016.

Despite remaining negative, it’s positive to see that average U.S. commercial P&C rates failed to decline further in July, and remained in line with the previous month.

With reports from MarketScout and KBW suggesting that insurers are pushing for a stop to further rate declines it will be interesting to see what happens to rate movements across the sector in the coming months.

– Commercial P&C rates down by 2% in May as deceleration trend stops.