The insurance and reinsurance industry was on the hook for a record $144 billion of disaster losses in 2017, which was largely driven by natural catastrophe events and the three major U.S. hurricanes, Harvey, Irma and Maria, which alone drove $92 billion of industry losses, according to Swiss Re.

Global insurance and reinsurance player Swiss Re’s sigma research team recorded 301 catastrophe loss events in 2017, down slightly from 329 in 2016, with over 11,000 people around the globe either losing their lives or being reported missing as a result.

Economic losses from disasters and natural catastrophes in 2017 reached the second highest level of record, at $337 billion, while the insurance and reinsurance industry took a significant share at $144 billion, the highest annual industry loss ever recorded, according to the Swiss Re Institute. 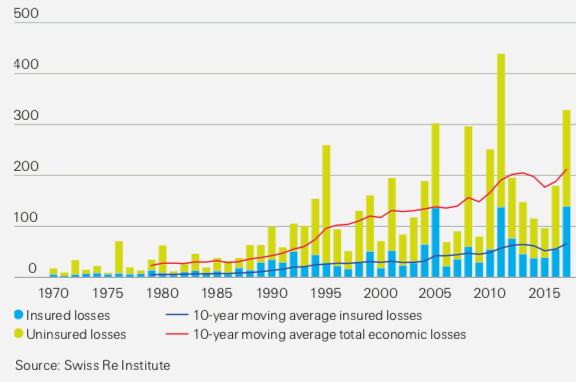 Both economic losses and insured losses came in well above the last ten-years average, which sat at $190 billion for economic and $58 billion for insured.

However, man-made disaster losses in 2017 were a little below average, as the insurance and reinsurance industry loss from these totaled $6 billion, which is a billion below the ten-year average.

So that means natural catastrophes and severe weather events generated a stunning $138 billion of insurance and reinsurance market losses during 2017, up 190% on the prior year and way above the $50 billion ten-year average figure.

Hurricanes Harvey, Irma and Maria, which created their largest losses across the Caribbean and United States, alone totaled $217 billion in economic damages.

But with only $92 billion of the hurricane losses covered by insurance and reinsurance, the protection gap of $125 billion is again evidence of the job that needs doing to provide risk transfer more broadly to protect against such big economic hits.

The insured losses from the hurricanes amounted to 0.5% of U.S. GDP and the storms broke down as, Harvey $30 billion, Irma $30 billion and Maria $32 billion of insurance market losses.

“After 12 years of no major hurricane making US landfall,2 2017 is likely to go down as one of the most expensive North Atlantic hurricane seasons in history, in terms of both economic and insured losses,” commented Martin Bertogg, Head of Catastrophe Perils at Swiss Re.

Swiss Re notes that the North Atlantic may still be in an active phase of hurricane activity, which means there could be a higher probability of hurricane formation and major hurricanes making landfall. Track the 2018 hurricane season with Artemis here.

“A key take away from HIM is that insurers need to consider multiple hurricanes occurring in a given year, as much as the severity of individual events, in their modelling of hurricane risk. This is important from a risk management perspective as it will help insurers – and, ultimately society – be better prepared for similar magnitude events in the future,” Bertogg said.

Interestingly, despite the three major hurricane impacts, Swiss Re still puts 2005 as a more impactful year for insurers and reinsurers, with losses from that season when Katrina, Wilma and Rita struck estimated to be worth over $110 billion at 2017 values.

Wildfires were the other peril that drove a significant chunk of the insurance and reinsurance industry disaster losses in 2017, with a record level of losses suffered from this peril.

Combined insured losses from all wildfires worldwide reached $14 billion, the highest ever in a single year. The Californian wildfire outbreaks in October and December 2017 led to record losses of $13 billion.

Once again, in 2017 flooding caused significant impacts to lives and livelihoods around the world, but minimal insured losses due to the size of the protection gap.

In China heavy rainfall resulted in major Yangtze River flooding across 11 provinces, inundating more than 400,000 homes. Economic losses were estimated to be $6 billion, so becoming the costliest disaster event in 2017 in Asia, but given the very low insurance penetration the impact to re/insurers was small.

The data reflects the enormous job and opportunity for the insurance and reinsurance industry, to cover more of the economic losses and leave less uninsured.

But the protection gap seems to be widening, as evidenced by the chart further up this article, which reflects the rapid increase in exposure levels and the fact that right now re/insurers have much more to do to work on narrowing the gap.

For comparison, Aon Benfield estimated insurance industry losses from 2017 catastrophes and severe weather events at $134 billion, while Munich Re estimated them at a record $135 billion.