2015’s catastrophe, natural disaster and severe weather events around the globe resulted in insurance and reinsurance industry losses of $35 billion, which is 31% below the 15 year average of $51 billion and the lowest annual insured loss since 2009.

However, while frequency of natural disaster and severe weather events is seemingly up on average, the cost is down. The 300 events caused an insurance and reinsurance industry loss of $35 billion across 2015, 31% below the $51 billion long-term average. 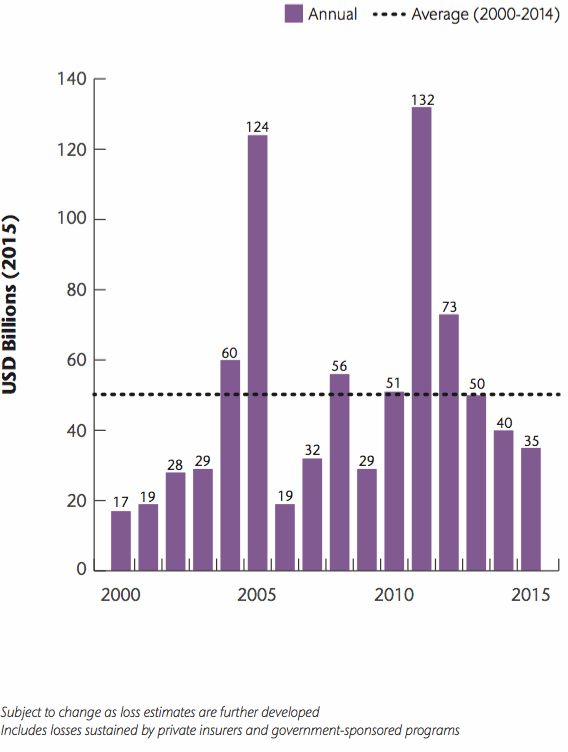 The most expensive single event for the insurance and reinsurance industry was the February winter storm that impacted much of the Eastern United States, resulting in public and private insured losses of $2.1 billion.

Interestingly, the data from Aon Benfield shows just how far below the average insurance and reinsurance losses from tropical storms and hurricanes were during 2015.

Meanwhile economic losses were also below average, at $123 billion which is 30% below the 15 year average of $175 billion. In economic terms forest fires in Indonesia were the most costly event of 2015, causing $16.1 billion of damage and impacting GDP in the country by 1.9%.

Stephen Mildenhall, Chairman of Aon Analytics, commented; “Global insured property catastrophes in 2015 accounted for just 28 percent of economic losses, in-line with the 10-year average of 29 percent. In many regions, economic catastrophe losses are very material relative to national GDP and yet are insured at much lower levels than in the United States and Europe. Of our top five economic losses, four occurred outside the United States and yet none of these was a top 10 insured loss owing to low insurance penetration in the affected countries. With its abundant capital and sophisticated risk management tools, the industry should drive its own growth by better delivering on its core mission of providing critical risk transfer products to enable stable economic development in all regions of the world.”

Flood, severe thunderstorm and wildfire risks remain the most costly, accounting for 59% of all economic losses during the 12 months under review, according to Aon Benfield.

Steve Bowen, Associate Director and Meteorologist at Impact Forecasting, commented; “While a notable uptick in recorded natural disaster events did not directly translate to greater financial losses in 2015, the year was marked by 31 individual billion-dollar disasters, or 20 percent more than the long-term average.

“For just the fourth time since 1980, there were more than 30 such events in a year. Asia once again incurred the greatest overall economic losses, representing 50 percent of the world total and four of the five costliest events. Despite 32 percent of global economic losses occurring in the United States, it accounted for 60 percent of the insured loss and seven of the top 10 costliest insured events.

“The strongest El Niño in decades had definitive impacts on global weather patterns during the second half of 2015 that led to costly flood, tropical cyclone and drought events. These impacts will linger into the first half of 2016, and ironically enough, we could be discussing impacts from La Niña at this time next year.”

Demonstrating the importance of insurance penetration, 32% of catastrophe losses were in the United States, and the country also accounted for 60% of global insured losses, highlighting the higher uptake of insurance in the U.S.

The top 10 insurance and reinsurance loss events around the globe in 2015 were five United States severe thunderstorm outbreaks, one United States winter storm, one European windstorm, one Indonesian forest fire, and one United States drought. No single geographic region of the world sustained aggregate insured losses above its 15-year average in 2015, although EMEA, Asia Pacific and the Americas (non-US) were all above their respective medians, according to the report.