In the wake of hurricane Ian, the industry loss warranty (ILW) market faces its share of losses, which, alongside broader issues impacting reinsurance and retrocession capital availability, means ILW rates-on-line are now heading for all time highs, according to our sources.

We’ve now updated our industry-loss warranty (ILW) pricing data set using insights gathered from a range of market sources and projected out into the first-quarter of 2023 what the potential rates-on-line (RoL’s) could be for certain fixed industry-loss attachment points.

The ILW market remains a relatively opaque segment of the reinsurance and retrocession marketplace, so there is a lack of transparency over the possible losses this market segment faces due to hurricane Ian.

But, after key industry loss estimates came in above US $40 billion for Ian, it’s understood the majority of Florida wind-only ILW’s that were in-force at the time of the storm are seen as trapped or likely to trigger.

US wind ILW’s in-force, in the main, had higher attachment points than where loss estimates for the hurricane currently stand, so at this time appear largely safe from Ian.

But, as ILW capacity had been dented before in recent years, due to a series of loss events and trapping, it’s expected that available ILW capacity has fallen again as the end of year renewals approach, when a significant proportion of global retrocession arrangements are purchased.

Because of that and the fact ILW rates-on-line and pricing were anticipated to increase anyway, on the back of general reinsurance market capital issues and factors such as global inflation rates, we’re now told that ILW rates will jump significantly.

ILW rates and pricing were already seen as much higher even before hurricane Ian came along, with RoL’s nearing record highs.

Now, we’re told to expect ILW rates-on-line to jump well above their historical record levels, even higher than the rates seen in 2006 and 2009, which were the two historical hard market high-points for the ILW sector.

We’ve collected new data on ILW market pricing and discussed these with sources on the capital and broking side, to come up with some indicative projections for ILW rates-on-line into early 2023.

On the ILW pricing chart below (analyse an interactive version of here) the dotted-lines indicate projections for the forward-looking ILW rate environment. 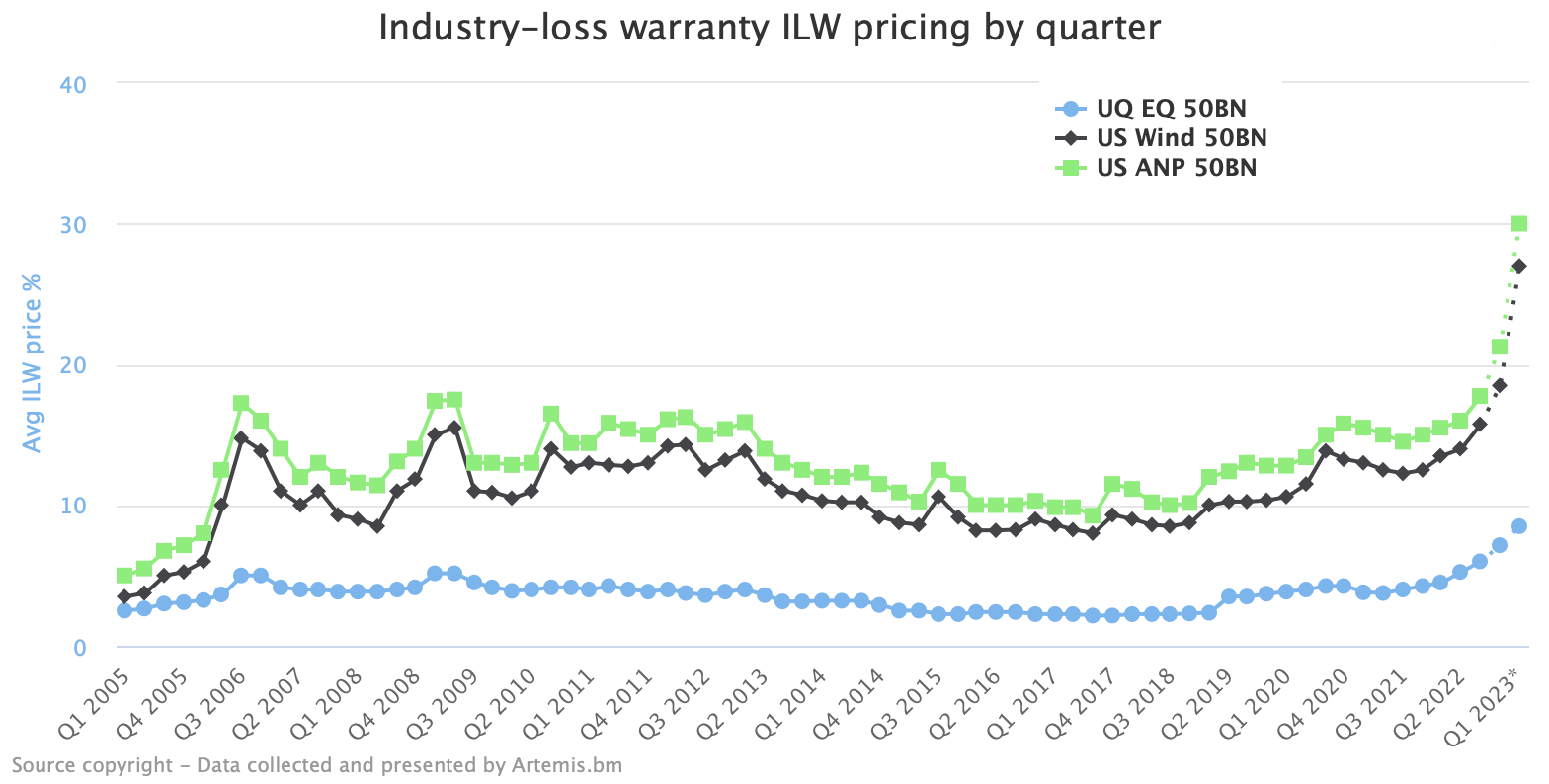 This industry-loss warranty pricing data set has been validated with market sources, so we believe it to provide a reasonable reflection of average rate-on-line or pricing that these property catastrophe ILW’s could have traded at throughout the historical period, or the approximate prices being quoted at this time.

Of course, consensus is always very hard to find, so it’s important to consider these ILW price indices indicative and to get real and current quotes from brokers or markets.

On the projected line into Q1 2023, there is still significant uncertainty over whether ILW’s will trade at such high levels, but certainly any quoting (if available) is at record levels now. We aim to refine this projection as the market moves to and beyond the end of year renewal with the help of market sources.

But, it’s clear from this data that the current hard reinsurance market and lack of retrocession capacity is set to elevate ILW rates-on-line considerably as we move into 2023.

ILW rates are set to reach new record highs and therefore the returns investors can earn for deploying capital to ILW investment strategies will increase, while managers of ILW investments may also find themselves able to tighten up terms of coverage and take on less risk, while still maintaining target returns.

At these price levels, ILW’s could prove a very attractive investment option for ILS fund managers and investors as we move into 2023.

That could also help to alleviate some of the retrocession capacity shortage, if retro buyers look to ILW’s to hedge their peak peril exposures while traditional indemnity retro capacity remains less available.

We’re told prices are also rising sharply for county-weighted ILW capacity, which had made a bit of a comeback in the last year.

Alongside higher pricing for this kind of protection, buyers should also expect much tighter terms, plus a lack of available capacity looking to support Florida-specific ILW’s after hurricane Ian.

The ILW market can be a fast-moving one, especially when it comes to pricing and markets will want to get ahead on quoting higher rates now, so buyers are aware what they could be facing after the January renewals, when some reinsurers look to hedge their books using ILW’s for retro in the wake of their 1/1 portfolio building.

Things can change, as we explained, so do treat this projected data as indicative of the very high ILW rates being quoted right now. It doesn’t necessarily mean they will trade at such high levels, although record highs are likely.

Finally, it’s important to note that these are not risk-adjusted prices and many believe the risk of a $50bn event occurring has increased over the duration of this data set.

We hope you find our ILW pricing data set useful, as another indicator of reinsurance and retrocession market appetite and rates-on-line.

It can be helpful to compare this ILW pricing data with our other indices and to use the indications they provide to help inform your pricing and return expectations, such as our tracking in real-time of issued catastrophe bond coupons, spreads and cat bond multiples, the global property catastrophe reinsurance pricing from Guy Carpenter, as well perhaps as the catastrophe bond fund return indices from Plenum, and data on broader ILS fund strategy returns from ILS Advisers.