The insurance and perhaps reinsurance market loss from the recent Genoa, Italy Morandi motorway bridge collapse has been estimated at as much as EUR 600 million (US $685m) by analysts, with business interruption expected to be a large contributor to the industry loss. 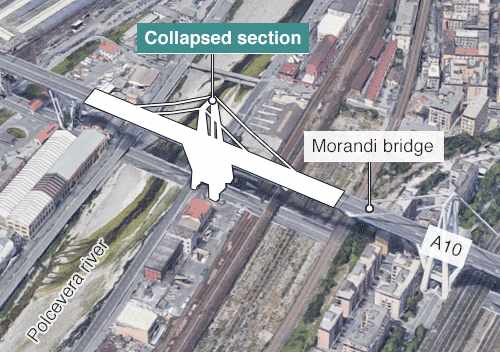 Morandi bridge collapse via the BBC

The bridge collapse in Genoa saw part of one of the main Italian motorways come down, causing the deaths of some 43 people.

A 200m long section of the Morandi bridge fell 45m at a time when traffic levels were relatively high and so dozens of vehicles were impacted by the collapse.

The Morandi bridge is one of the main routes in and out of Genoa, linking the city to the A10 motorway and the main road towards southern France. The section of the bridge collapsed last Tuesday at a time when the region had been struck by extremely heavy rainfall, however the cause of the collapse is unknown at this time.

Analysts at J.P. Morgan Cazenova have provided an estimate of the potential impacts to the insurance and reinsurance market, saying that they expect an industry loss of somewhere between EUR 400 million to as much as EUR 600 million.

Of this, the analysts say that Swiss Re, whose Corporate Solutions unit is the lead insurer of the Morandi bridge, could face as much as EUR 70 million of loss, while Allianz could face EUR 50 million and Talanx (the parent of Hannover Re) EUR 20 million.

It’s likely that other major European insurers and reinsurers will be exposed, but at this time it’s unclear whether the property loss could be sufficient for any of the impact to fall to capital markets backed sources of reinsurance or ILS funds.

The J.P. Morgan Cazenove analysts explained that the insured loss will largely be driven by property damage for the bridge and business interruption for the toll operator, as well as some insurance exposure for liability cover, life insurance and motor insurance.

There could also be additional business interruption claims for the railway line that passed underneath the collapsed section of the bridge.

“Because the cause of the accident is not yet known, and because the insurance cover is complex, our estimates of the insured loss are at this stage tentative,” the analysts said.

However the analysts also believe that each of the exposed policies will have their coverage capped, adding that because of this they expect the impact to major European re/insurers 2018 results will be limited.

In the past, some ILS funds and collateralized reinsurance vehicles have been exposed to major industrial or man-made type loss events, such as the Tianjin port explosions.

In this case, should the industry exposure be as high as the analysts suggest, there is the potential for some leakage of the loss into certain ILS markets or third-party capital backed structures that specialise in broader commercial property coverages, or perhaps via retrocession covers that may become exposed.