Industry loss warranty (ILW) trading volumes have risen in 2018 so far, with protection buyers showing renewed interest in the industry loss trigger based product, but while volumes rose Aon Securities has also noted that, despite capacity shortages at times, ILW prices are tending to soften.

Year over year capacity has been in shortage at times for the majority of ILW products, Aon Securities explains.

However, reinsurance firms are becoming very flexible when it comes to the ILW product and Aon notes they were “willing to entertain lower trigger levels in order to raise their market profile and to differentiate themselves.”

Importantly, Aon’s data shows that ILW trading volume has increased year over year in 2018, and it provides a current estimate for in-force ILW limit of $5 billion at this time. 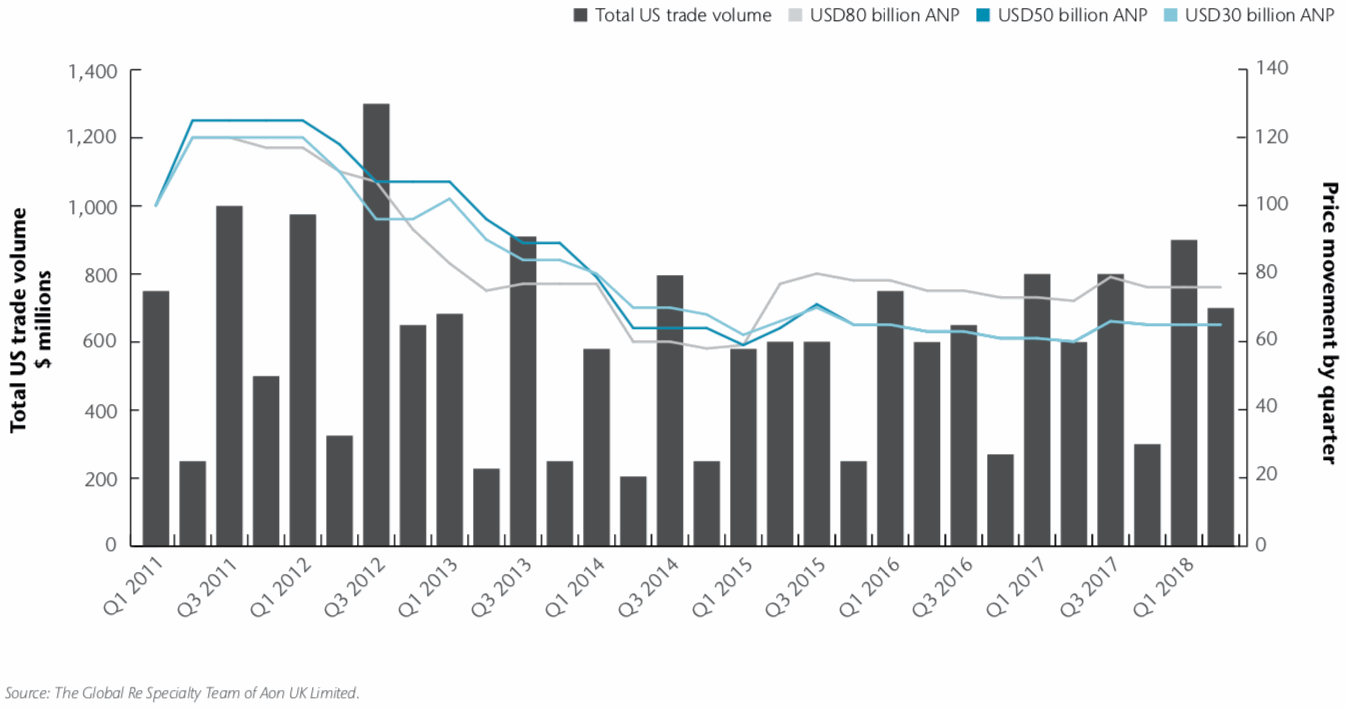 ILW trade volume and US All Natural Perils price movement

Aon goes into more detail, explaining that regional US ILW covers are providing an attractive potential expansion route for markets, given that nationwide ILW cover is already easily accessible for protection buyers.

Capital market investors and ILS funds continue to be a major driver of the transacted ILW limit, Aon notes. While conventional buyers with indemnity capacity are also actively participating in the ILW market as well.

The ILW market did react to the losses from the 2017 hurricanes, with price increases of roughly 15 to 25 percent seen, as markets that faced losses pushed through a pricing correction.

But Aon notes that depending on the ILW’s structure and modeled expected loss, some renewals have been successfully executed outside of this pricing spread as well, while clean renewals were seen to soften significantly from January 1st with flat pricing being demanded.

Low attachment and subsequent event ILW coverage suffered a pricing correction to the degree that its purchase has become no longer a viable proposition for some protection buyers today.

That means there could be a gap in the market for any ambitious capacity providers keen to step into the specialist ILW space.

Finally, a seasonal uptick in demand for ILW’s to cover the U.S. hurricane season created a flurry of activity as the July 1st renewal date approached, Aon said.

It’s also worth noting that, as we wrote recently, ILW rates on-line have been falling even though the loss from hurricane Irma has been creeping up and threatening more ILW positions.