Insurers have now received 86,703 claims related to the Southeast Queensland and New South Wales flooding, resulting in an insurance and reinsurance industry loss of an estimated $1.3 billion, according to the Insurance Council of Australia (ICA).

The latest, March 7th, 2022, update from the ICA represents a 28% increase in claims from Friday March 4th, and is driven by an almost 50% rise in claims from New South Wales as policyholders start to return to their homes in the region.

Currently, the ICA notes that 72% of claims are from Queensland and 28% from New South Wales, with 83% of total claims across both states for domestic property, and the remainder for motor vehicle.

Based on previous flood events, the ICA pegs the insurance industry loss at an estimated $1.3 billion, which is up by $300 million on Friday’s estimate.

Andrew Hall, Chief Executive Officer (CEO) of the ICA, said: “The ICA and insurers are now on the ground in a number of locations supporting communities in their recovery. We continue to hear reports that some customers are uncertain about whether to discard destroyed property.

“Insurers are encouraging customers to take photos and video and retain serial numbers and other identifying information if it is known, however they are not required to retain destroyed property, particularly if doing so would cause a health risk.

“As expected, claims continue to grow from this widespread event, which is shaping up to be one of the most significant floods this country has experienced. We will always have extreme weather in Australia, but if we want different outcomes the future Australian governments must increase investment in measures to retrofit homes and better protect communities.”

Ultimately, reinsurance is expected to trigger as Australian flood claims rise, with numerous insurance carriers already highlighting their maximum retentions and others saying they expect to make recoveries.

Early assessments suggest that reinsurers will bear the brunt of the costs and that the toll could reach towards A$2 billion. 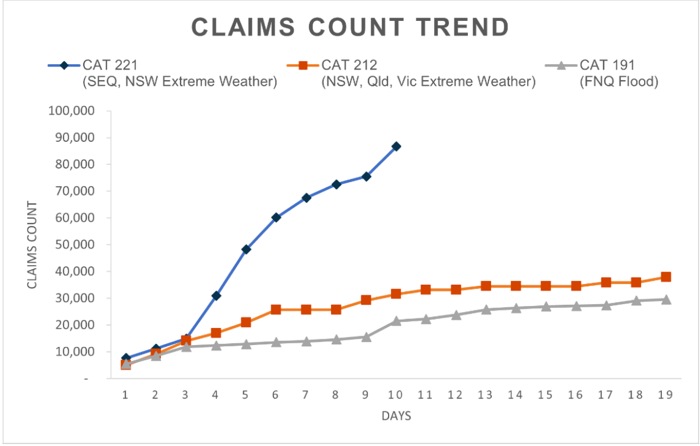 This chart, provided by the ICA, compares the current flood disaster versus last March 2021 which was ultimately seen as around an A$751 million event by PERILS AG, and another comparable cat event in the far north Queensland area, which was a roughly A$1.2 billion insurance industry loss.