Australian primary insurance group IAG has renewed its $10 billion catastrophe reinsurance tower for 2023, but the insurers maximum first-event retention has risen 75%, which the company said was in response to inflation and global reinsurance market conditions.

IAG said this morning that successfully renewed its catastrophe reinsurance program for 2023, along with two of its whole account quota share arrangements.

The cat reinsurance works in tandem with the quota shares, which apply to 32.5% of natural perils for IAG.

The renewed tower features a main catastrophe reinsurance cover for two events up to $10 billion, with a retention of $338 million (67.5% of $500 million).

“Global reinsurance has become more challenging over the past year due to the impact of capital markets and Australian and international natural peril events, however IAG continues to have strong support from our long-term reinsurance partners,” McPherson said.

She further explained that the company had to respond to hard reinsurance market conditions.

Saying that, ““We have increased our first event retention reflecting inflation and global reinsurance market impacts. This was a rational economic decision balancing the interests of all our stakeholders including minimising the impact of additional reinsurance costs on our customers.”

In fact, IAG’s maximum first-event retention now stands some 75% higher than a year ago. 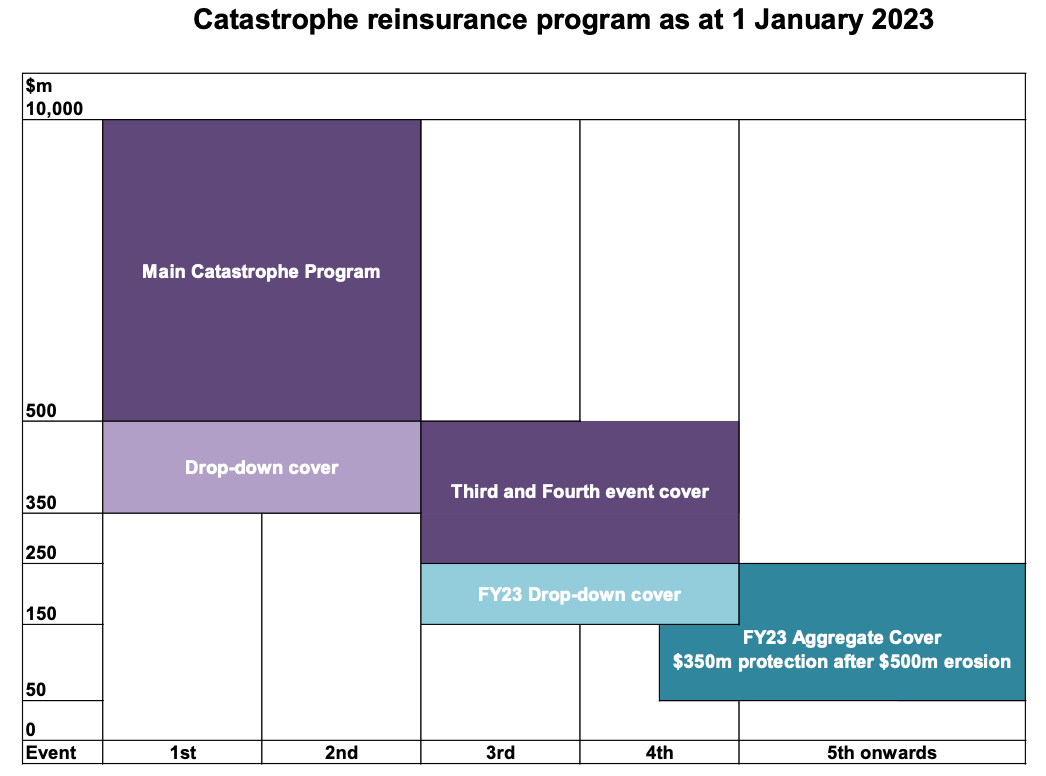 It looks like reinsurance costs have risen roughly 22% for the insurer as well, with the company saying that the non-quota share reinsurance expense for FY23 increased “as expected”, and is currently estimated to be in the range of $790 million to $820 million (FY22: $659 million).

90% of the reinsurance renewal was placed with entities rated A+ or higher, IAG said, which is in line with 2022.

These quota shares represent 10% of the 12.5% whole of account program that is due to expire on June 30th 2023, with the new agreements effective from January 1st 2023 and having a term of five years.

Ms McPherson commented, “IAG and its quota share reinsurers have engaged positively to renew their long-term partnerships ahead of the expiry of the original agreements. The willingness of leading global reinsurers to renew their arrangements with us reflects their confidence in the IAG franchise and the strength of our financial outlook.

“In an environment of constrained reinsurance capacity, the renewed agreements provide IAG with materially consistent financial outcomes and support our 15% to 17% medium-term reported margin target.”

IAG said renewal discussions over the remaining 2.5% of quota share due to expire on June 30th 2023, are expected to be completed over the coming months.