Our latest update on hurricane Sandy can be found here. Insurers, reinsurers and catastrophe bond investors will no doubt be going home this weekend with the little matter of hurricane Sandy on their minds. The hurricane which has now passed through the Caribbean and Bahamas, leaving 21 people dead and some fairly significant damage in its wake, is heading north tracking the U.S. coastline and the forecast still shows a landfall on the U.S. east coast somewhere from North Carolina to as far north as Cape Cod.

Under normal circumstances, given the current forecast, hurricane Sandy would not be too much to worry about as the various models show Sandy making landfall as either a strong post-tropical storm with winds around 70mph or a weak hurricane with winds around 80mph. Normally, while that would cause some damage potentially leading to an insured loss in the very low billions of dollars, that would not be too concerning.

However, forecasters are suggesting that hurricane Sandy could lead to ‘perfect storm’ conditions as it moves north and interacts with cooler air. The worst case scenarios which are now being broadcast widely are for Sandy to merge with a strong cold front moving in from the west, which could lead to a merging of the storms creating what some call ‘perfect storm’ conditions similar to the one given that name in 1991.

This could result in the warm, moist tropical air from hurricane Sandy sitting over New York and New England area for a number of days, bringing risk of snow, heavy rain, damaging winds and derecho type weather effects. The insured loss from a storm like this could exceed losses caused by hurricane Irene last year according to some.

If these conditions do come together and Sandy comes ashore in the highly populated northeast U.S. then there can be no forecast for the potential loss. It’s impossible to predict the impacts of this kind of storm. News outlets are talking about millions to tens of millions being without power for a few days, potential storm surge flooding, inches of rain, potentially inches of snow as well. The National Hurricane Center forecasts winds of strong tropical storm force to hurricane force hitting the exposed areas of the Northeast/Mid-Atlantic states from Sunday through to Wednesday.

Sandy is expected to weaken a little, currently the hurricane is a category 1 with 80mph sustained winds. But once Sandy moves north the storm could intensify again as the warm tropical air reacts with cooler air from the north. Sandy is a large storm now with tropical storm force winds extending 275 miles, 445km from the center. That is enormous and once over land it will affect the area for a number of days.

Sandy could cause quite significant flooding, if all the conditions align, as a number of days of strong onshore winds combined with a few days of high tides could become a real problem for low lying areas. You can see a modelled forecast for storm surge below from the NOAA, the bright green signifies 16 to 20 feet, the darkest value is 45 feet offshore. 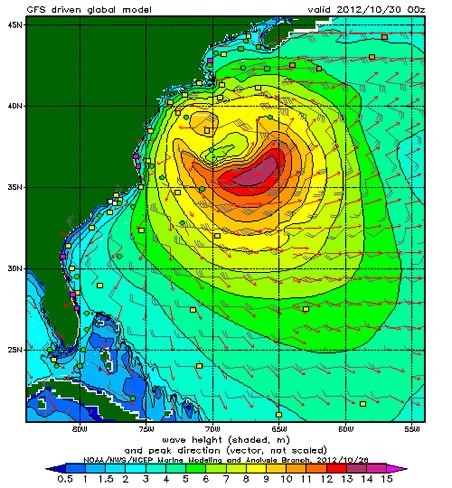 Reinsurance broker Guy Carpenter has the following to say on hurricane Sandy:

Sandy moves into the North Atlantic on a track further to the west, allowing interaction with a frontal system leaving the mainland. The sharp contrast between polar and tropical air causes rapid development of a large “nor-easter” type cyclone, with a possible northwest drift of the cyclone into the northeastern U.S. for early next week. This scenario would bring at least storm and potentially hurricane conditions to the northeast U.S. coast, including storm surge, storm to hurricane force winds, and excessive precipitation. Such a combination of meteorological factors is very rare, but the odds against such a scenario are diminishing. The most recent historical event comparable to this potential scenario is the “perfect storm” of October 1991.

The interaction of a tropical system, a polar frontal system, and the subtropical ridge in the Atlantic is highly complex, extremely difficult to forecast and captured with difficulty by forecast models. It is far too early to determine the exact timing and placement of this scenario.

Never before has a tropical storm system hooked back to the left in the way Sandy’s track is forecast to, according to The Weather Channel.

We’ll try to keep you updated if anything changes over the weekend and Sandy heads for the coast sooner than expected, otherwise, if nothing changes significantly our next update will be on Monday morning. Hurricane Sandy is expected to approach the U.S. coast in the early hours of Tuesday morning. By Monday the potential for impact should be much clearer.

You can see hurricane Sandy’s current location and forecast path below and you can always keep up to date with our interactive tracking map here.