Hurricane Lane continues to track towards the Hawaii island chain as a category 3 storm this morning with sustained winds of up to 120 mph, some higher gusts and it remains the rainfall impacts that are most severe currently and any reinsurance or ILS market exposure is likely through aggregate contracts.

Hurricane Lane is soaking the Hawaii island chain with Big Island having experienced up to 30 inches in places, resulting in wide-spread flooding.

Next the storm threatens Maui and Oahu, where rainfall levels are anticipated to be similar, with maximum amounts of up to 40 inches possible in isolated locations, while coastal flooding is also a threat from a storm surge and high waves along the southern coasts. 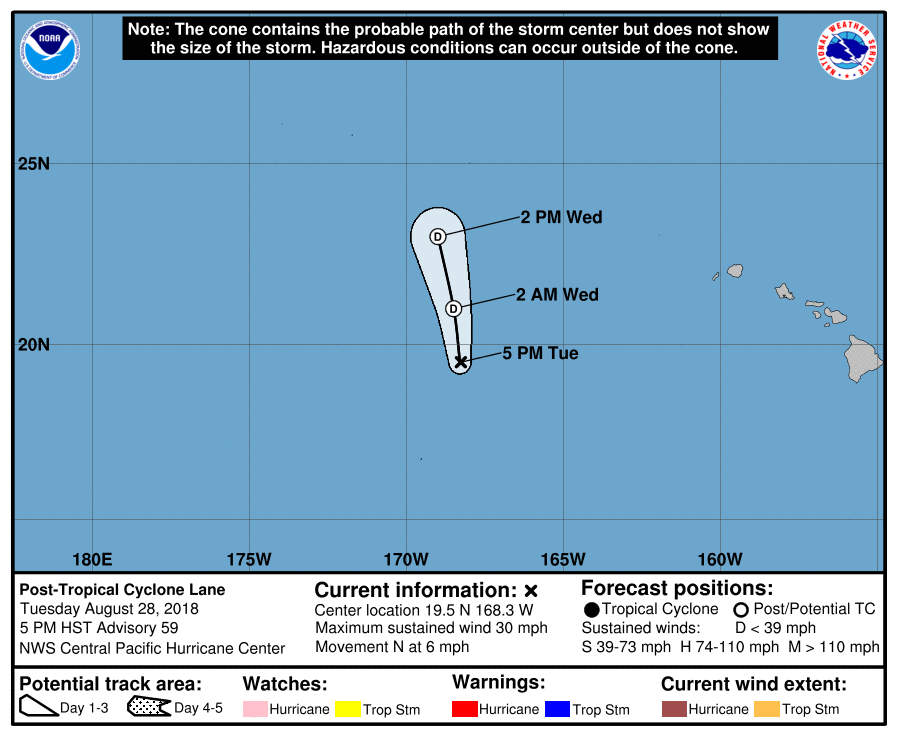 The main exposure for the reinsurance and insurance-linked securities (ILS) sector is expected to be to aggregate contracts, that could pick up some losses from hurricane Lane and add them to other loss totals from throughout the year so far.

Fitch Ratings said, “Exposure to the reinsurance industry would principally be experienced through aggregate catastrophe treaties in which Lane could add losses from primary cedants that have reported losses from other events throughout the year. Favorably, global reinsurers have experienced only modest losses thus far in 2018.”

For the catastrophe bond market, the primary insurers cat bonds with exposure to named storms in Hawaii are per-occurrence in nature and have high attachment points. So the cat bonds of companies such as Heritage (which has a significant book in Hawaii) are expected to be safe from any impacts due to hurricane Lane, unless the storm track forecast changes dramatically and a landfall is made.

However there are plenty of aggregate catastrophe bonds exposed that provide retrocession to major re/insurers and that are exposed to Hawaii named storm risks. There is the potential for some bonds so see some erosion of aggregate retention layers, but direct impact is not expected while the forecast for hurricane Lane continues to see the storm turning to the south of the islands of Hawaii with no direct landfall made.

Specialist ILS investment manager Plenum Investments commented, “Although Hawaii is covered in many CAT bonds, it usually only represents a very small proportion of the insured values. Only one CAT Bond, Citrus Re 2016-1 D-50, has a significant exposure to Hawaii. Based on hurricane Lane’s current projected track and the weakening of the storm, we see only a very small likelihood for a default of potentially exposed CAT bonds and do not anticipate a negative effect on the CAT bond market or the Plenum CAT Bond Fund.”

Despite the fact hurricane Lane looks unlikely to make landfall the rainfall and resulting flooding could drive economic and insured losses for Hawaii that will be significant for the region.

As a result, primary insurer exposure is certain for the major homeowners and commercial players operating there, with some of their aggregate reinsurance layers perhaps exposed.

Analyst Mike Zaremski at Credit Suisse said that the impact to primary insurers is not expected to be significant though, compared to their catastrophe budgets for the quarter.

“We estimate losses for every insurer under our coverage universe would be less than $100m. AIG, which we do not cover, could see losses top $100m given it has historically been a sizeable participant in Hawaii’s private flood insurance market,” Zaremski explained.

Discussing insurers the analyst does cover, Zaremski said, “For example, at a $2bn statewide insured loss level, we estimate Progressive’s share of losses would equal $47m, which compares to our 3Q’18 catastrophe load of $170m. For Allstate, we estimate losses between $56-$102m.”

He also noted that automobile insurance losses are likely and this could raise loss totals for the insurers.

Zaremski noted that even without a direct hit from hurricane Lane the insurers face flooding losses, despite the fact many homeowners do not take up flood coverage and of course the NFIP will take its share.

“Of the roughly 5,000 private insurance policies purchased by Hawaiian residents, FM Global, AIG, and Swiss Re had upwards of 70% market share as of last year’s 2017 data. This is why we estimate AIG’s losses could top $100m, depending on the companies reinsurance purchasing,” Zaremski said.

As we explained yesterday, here are companies considered most at risk from hurricane Lane losses.

Also, there is roughly $8 billion of property reconstruction value at risk of flooding from hurricane Lane, according to Corelogic:

The latest hurricane Lane forecast continues to suggest the storm will turn to the south of the Hawaii islands and track west, meaning landfall is currently considered unlikely.

So for now it is the rainfall and flood threat that the industry is watching closely.

To summarise, as Fitch explains, reinsurance aggregates appear the contracts most at risk of any impact, although overall any industry losses from hurricane Lane look set to be easily manageable for this well capitalised industry.