The major hurricane Ian landfall scenario has worsened considerably after the NHC found the storm has intensified rapidly again, to now pack 155 mph sustained winds as a high-end Category 4 storm on approach to Florida.

We are now looking at a hurricane landfall with strong Category 4 sustained wind speeds it seems, with some additional strengthening even possible and Category 5 not out of the question now.

Hurricane Ian has deepened considerably, as we suggested was possible earlier today, with the minimum central pressure now stated at 937 mb.

Some meteorologists are now saying a little additional deepening is possible as hurricane Ian approaches land, while at the same time the wind field is set to expand, some forecasters say.

This threatens a wider area of stronger and more intense winds, with the potential for more property damage and higher, more impactful storm surge, than modelled scenarios put out yesterday or first thing this morning had considered possible.

The storm surge forecasts have been increased, with now up to 18 foot of surge said possible.

The NHC now states that “Ian is forecast to make landfall on the west coast of Florida as a catastrophic category 4 hurricane” and predicts “Catastrophic storm surge, winds and flooding” for the Florida Peninsula, highlighting it as “a life-threatening situation.”

Does this mean loss estimates could rise? It’s entirely possible, although a range of up to $40 billion still seems most likely, more on that in our earlier article.

One thing is certain, hurricane Ian is looking more dangerous by the hour as it approaches Florida, with a significant threat to lives and property unfolding.

The industry loss quantum will come down to specific landfall location, region most affected by the highest winds, and also how long hurricane force gusts are sustained across the Florida Peninsula.

The NHC cone data still shows a 140 mph hurricane right up to landfall, after which it is expected to weaken to Cat 1 as it crosses Florida.

It’s of note that one of the models, the German Icon, showed a resurgent hurricane Ian moving across Florida, into the Atlantic to strengthen and come ashore around Charleston on the east SC coast. That’s a scenario nobody would want to see unfold, but a number of models now take hurricane Ian across the Florida Peninsula and back into the Atlantic (including the NHC cone), so can’t be completely ruled out and is something to watch for. 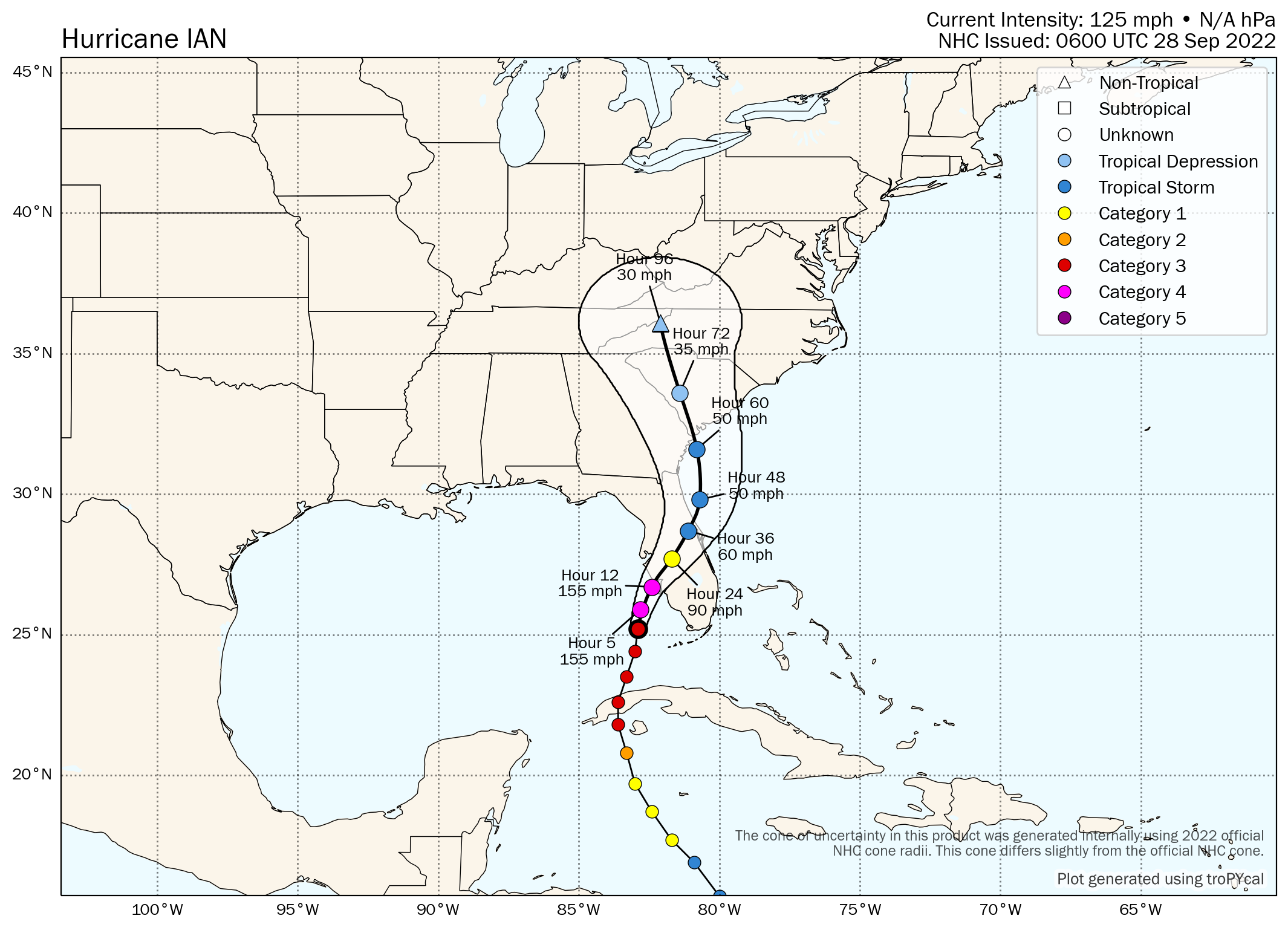 For reference, here also is the latest peak storm surge graphic from the NHC, which now shows a surge of up to 18 foot as possible and widely above 6 foot on the central west coast of Florida’s Peninsula.