As we explained yesterday, Gordon was set to traverse warm seas in the Gulf of Mexico yesterday and has been intensifying, with the storm’s maximum sustained winds now at 65 mph according to the latest air force reconaissance this morning, with higher gusts.

Hurricane Gordon is now a significant possibility by the time the storm reaches land, raising the likelihood of greater impact for insurance and perhaps reinsurance assets located in the region. 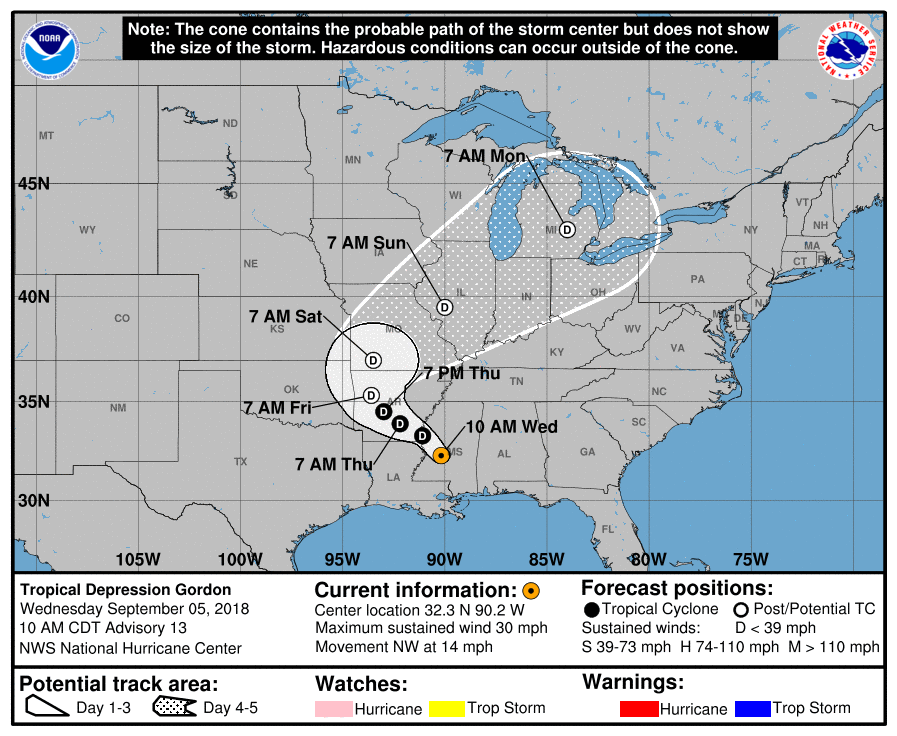 Gordon is currently tracking west-north-west at 15 mph through the Gulf of Mexico where sea surface temperatures are in the 28 degrees C and higher range providing plenty of fuel for the storm to intensify to hurricane status.

Insurance and reinsurance broker Aon’s Impact Forecasting division agreed late yesterday saying, “Since Gordon will be moving over an area of very warm sea surface temperatures in the next 36 to 48 hours, and be near or underneath an upper-level anticyclone, steady strengthening seems likely. It is possible that Gordon could peak as a Category 1 hurricane in roughly 36 hours – just before landfall occurs.”

The probability of Gordon becoming hurricane Gordon is reflected in these model runs, an increasing number of which suggest a category 1 hurricane at least before landfall.

Tropical storm Gordon is in a hurry, moving rapidly across the warm Gulf waters towards a landfall around the Mississippi to Alabama area, with a hurricane warning now in effect for the mouth of the Pearl River to the Alabama-Florida Border.

Tropical storm force winds now extend outwards up to 80 miles from the center of Gordon, which shows the storm is growing in size as well as intensifying as it crosses the warm waters.

Tropical storm Gordon will also be picking up moisture as it crosses the Gulf, with rainfall totals of as much as 4 to 8 inches quite widely felt and isolated totals of as much as 12 inches over southwest Alabama, southern and central Mississippi, southeastern and northeastern Louisiana, and southeast Arkansas.

Storm surge heights are still forecast at 3 to 5 feet maximum, but that could increase should hurricane Gordon occur and have a chance to strengthen before it makes its landfall.

The current warnings are for:

For insurance and reinsurance, as well as ILS and cat bond interests, at the moment even if hurricane Gordon does form before the storm’s landfall it appears more of an issue for the primary markets and flood coverage, including the NFIP.

Of course any losses from a hurricane Gordon could further erode aggregate deductibles, could have the potential to threaten low trigger industry loss warranties (ILW’s) and could impact ILS funds that deploy their capital to back primary sources of catastrophe exposed property and E&S risks.

Tropical storm Gordon remains a storm that insurance and reinsurance interests should watch over the coming day, as greater certainty over its potential to intensify emerges.

Analysts at KBW said that Gordon is likely to be more of a loss for insurers than reinsurers, with impacts to auto’s and properties flooded by rainfall expected to be the biggest impact.

The analysts said that even a hurricane Gordon at Category 1 would not be a major earnings event and definitely not a capital event.

State Farm, Allstate, Liberty Mutual, USAA, Travelers, AIG and Berkshire Hathaway all have a reasonable market share in the most threatened areas.

Fellow analysts at Goldman Sachs noted that insured losses from either a tropical storm or hurricane Gordon are expected to be limited, due to the size and intensity of the storm, as well as its path.