Tropical storm Franklin is expected to have intensified into hurricane Franklin, the first hurricane of the 2017 Atlantic tropical storm and hurricane season, before it makes its second landfall on the Mexican coastline.

Tropical storm Franklin passed directly over the Yucatan peninsula during the last day, with torrential rainfall that caused some flash flooding and landslides in the region and across Belize.

Now, Franklin has emerged into the Bay of Campeche in the Gulf of Mexico, where the tropical storm is feeding on warm waters to intensify and has now achieved maximum sustained winds of 70 mph with higher gusts, with further strengthening forecast before its second landfall on the Mexican coastline. Which could increase the potential for reinsurance or even ILS impact. 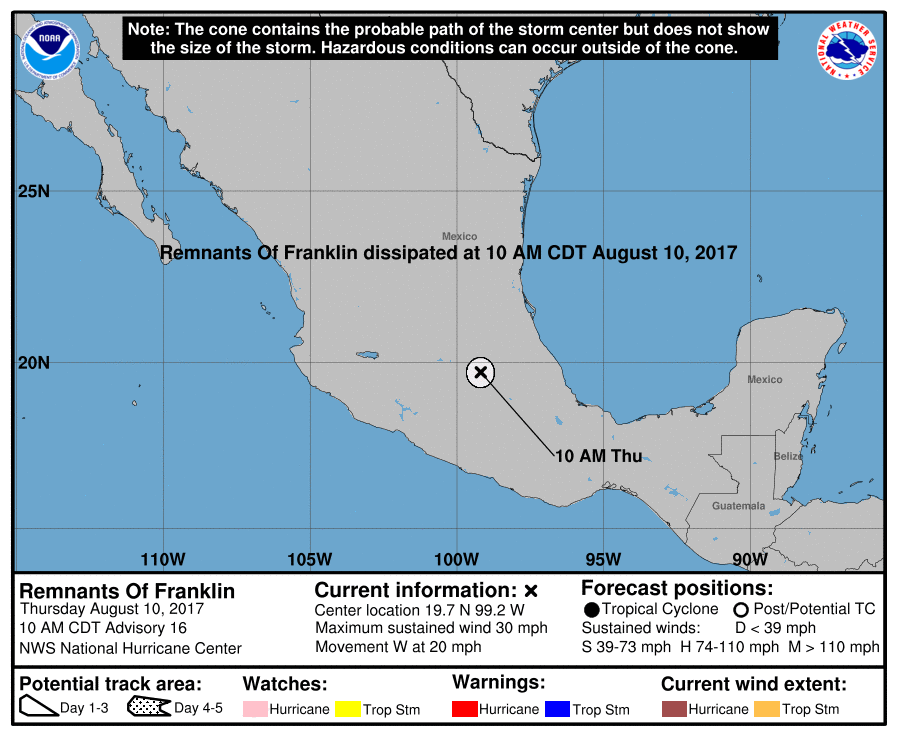 As a result, tropical storm Franklin is expected to be hurricane Franklin in the coming hours, the first Atlantic hurricane strength storm of the season.

This increases the threat to Mexico’s coastal population, as stronger winds and a higher storm surge than currently forecast are possible, depending on how much the storm can intensify today.

The latest NHC forecast provides a hurricane warning for the Mexican coast from Puerto de Veracruz to Tuxpan and a hurricane watch from north of Tuxpan to Rio Panuco. Tropical storm force winds currently extend up to 140 miles out from the centre of Franklin, so any intensification could create a hurricane with a reasonably large footprint.

Franklin is expected to cause rainfall totals of 4 to 8 inches with isolated maximum amounts of 15 inches across the Mexican states of Tabasco, northern Veracruz, northern Puebla, Tlaxacala, Hidalgo, Queretar and eastern San Louis Potosi in eastern Mexico.

A storm surge of 2 to 4 feet above normal is expected along the coast, although this forecast surge amount could rise if the winds do reach hurricane strength later today.

The question now comes down to just how much tropical storm Franklin can feed off the warm waters of the Gulf of Mexico before making landfall. The expectation is that Franklin will become a category 1 hurricane, but the difference between just a Cat 1 (74 mph winds) and a strong Cat 1 (winds up to 95 mph) can make a considerable difference to the amount of damage and loss caused.

For insurance and reinsurance interests the storm is likely to cause some level of loss, but is unlikely to be particularly significant unless it can intensify much more than currently expected.

Franklin, even as a hurricane, won’t pose any threat to the new World Bank catastrophe bond that covers Mexican hurricane risks.

The $360 million IBRD / FONDEN 2017 catastrophe bond has one tranche exposed to hurricanes on the Atlantic side of Mexico, but for this $100 million Class B tranche of notes for even a 25% loss of principal to occur the minimum central pressure of hurricane Franklin would have to be less than or equal to 935mb.

Currently, tropical storm Franklin has a minimum central pressure of 985mb and there is very little opportunity left for it to plummet to the levels required to trigger the World Bank cat bond.

Franklin poses the greatest threat to communities in its path, with the extreme levels of rainfall able to cause a significant loss of life should landslides and flash flooding occur. As always, the more minor hurricanes that strike Mexico tend not to cause a particularly large insurance or reinsurance loss, but have the potential to cause significant impacts to lives and livelihoods.

Update: Franklin made landfall as a hurricane with sustained winds of 85 mph and a minimum central pressure of 988mb, meaning that it poses no threat to FONDEN’s new World Bank catastrophe bond transaction.

You can track tropical storm Franklin as it gains strength towards becoming the first hurricane of the season over at our dedicated 2017 Atlantic hurricane season page.