Hurricane forecast raised by NOAA, season could be “extremely active”

The U.S. National Oceanic and Atmospheric Administration has upped its forecast for the number of tropical storms and the number of major hurricanes that could occur in the 2017 Atlantic tropical storm and hurricane season, saying that “the season has the potential to be extremely active,”  perhaps becoming the most active since 2010.

The majority of forecasters have been steadily increasing their predictions for tropical storms and hurricanes this year, as the chances of a significant El Nino occurring in the Pacific have reduced, with the forecast perhaps putting insurance and reinsurance interests more on alert this year than we have seen in the last few seasons.

NOAA also notes that the conditions in the Atlantic are now “very conducive” for storms to form and hurricanes to intensify, which along with the fact we’ve already had 6 named storms and now 1 hurricane in Franklin leads them to suggest an active year lies ahead.

NOAA’s forecasters now predict a 60-percent chance of an above-normal season, up from the 45 percent chance it gave in May, a relatively significant increase that perhaps signals a greater threat to insurance and reinsurance interests this season, should storms make landfall. 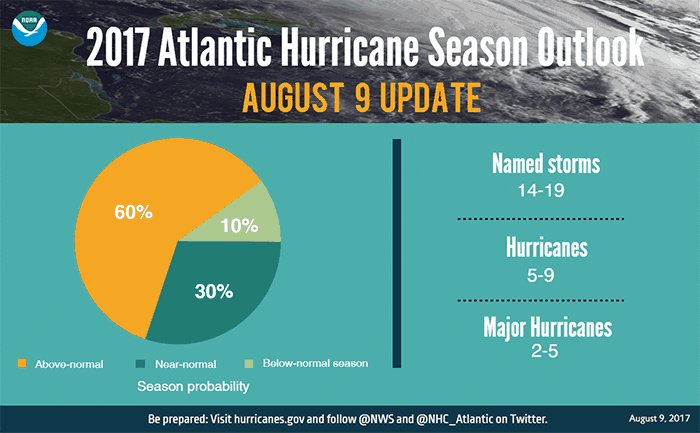 “We’re now entering the peak of the season when the bulk of the storms usually form,” commented Gerry Bell, Ph.D., lead seasonal hurricane forecaster at NOAA’s Climate Prediction Center. “The wind and air patterns in the area of the tropical Atlantic and Caribbean where many storms develop are very conducive to an above-normal season. This is in part because the chance of an El Nino forming, which tends to prevent storms from strengthening, has dropped significantly from May.”

Bell also said that warmer waters across the tropical Atlantic than models previously predicted also points to a more active season through the rest of this year, while the fact activity has already been higher than models predicted suggests that trend could continue.

As well as increasing the chances of an above-normal hurricane season to 60 percent, the update also decreases the chance of a near-normal season from 35 percent to 30 percent, and a below-normal season from 20 percent to only 10 percent. All of which points to more tropical activity in the weeks ahead and a clear reason for insurance and reinsurance interests to stay tuned to the Atlantic basis throughout the season.

Adding the NOAA update to the list of forecasters we track maintains our Artemis average forecast for the 2017 season of 14 named tropical storms, 7 hurricanes and 3 major hurricanes of Category 3 or stronger. 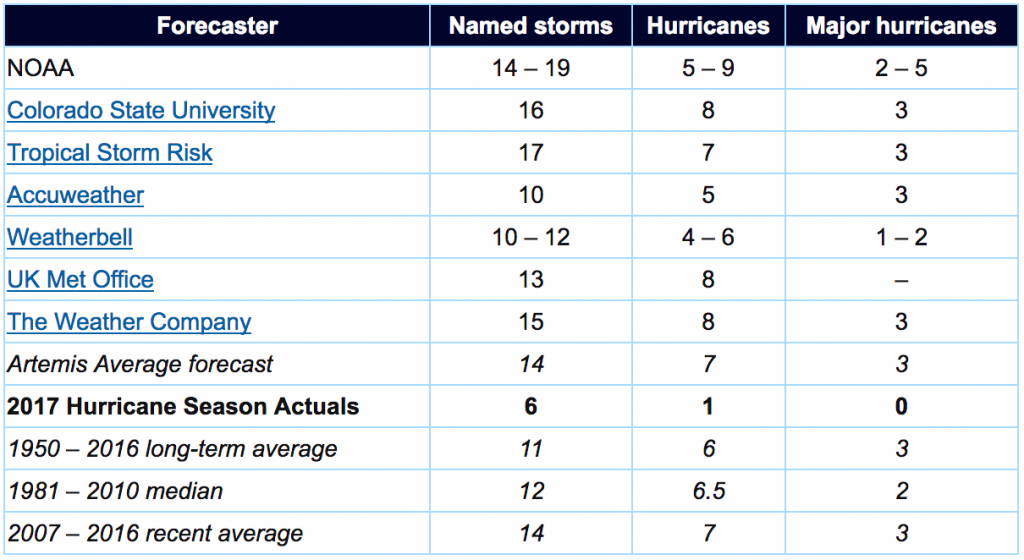 So with the majority of forecasters predicting that the 2017 season could be particularly active, compared to recent history, with some forecasting increased chances of storms steering towards the United States as well, the insurance, reinsurance, catastrophe bond and ILS markets will all be on alert for any storms that form and this season could result in some nervousness, if the forecasts play out as predicted.

Track the season over at our dedicated 2017 Atlantic hurricane season page.