Almost 25 years has passed since hurricane Andrew struck Florida and became the most costly storm to impact the state, but a modern-day repeat of Andrew would be significantly more impactful for insurance, reinsurance and ILS interests, while a near-replica that barreled into Miami could cause an industry loss of up to $180 billion, according to Swiss Re. 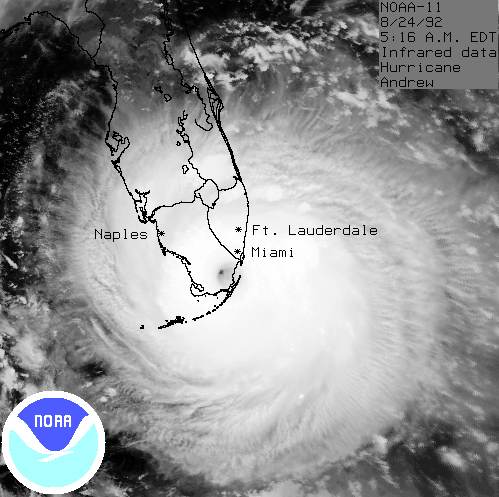 Global reinsurance players Swiss Re looked back at the impact of hurricane Andrew almost 25 years on from the storms devastating impact on Florida and the company modelled what a repeat of the hurricane would mean to re/insurers today, as well as what a slight shift in the track would mean for the industry loss.

Back in 1992, when hurricane Andrew struck the Florida coastline near Homestead on the 24th August, the impact was extremely severe. The storm was the fourth most intense hurricane to strike the United States, in terms of central pressure and the Category 5 hurricane caused an economic impact of around $29.5 billion.

The loss to the insurance and reinsurance industry was reported to have been $15.5 billion, which at the time was the largest single insured loss in history.

But a repeat of hurricane Andrew today would result in a significantly larger loss, both economically to the state and its residents, as well as to insurance or reinsurance interests.

But it is the near-replica scenario, where a repeat of hurricane Andrew today shifted its track around 20 miles north and made a direct hit on the city of Miami where the figures jump significantly again.

Under that scenario, the economic impact would fall in a range from $100 billion to $300 billion, while the loss to insurance and reinsurance interests could range from $60 billion up to as high as $180 billion, according to Swiss Re’s analysis.

Both the exact and close replica’s of hurricane Andrew would clearly demonstrate the huge amount of property and infrastructure costs that are not insured, with the government and taxpayers having to shoulder a significant proportion of the economic losses and rebuilding costs, while re/insurers deal with their share.

This highlights the fact that the protection gap exists in the most mature insurance markets in the world, a gap that has the potential to widen as infrastructure and economic development continues at a faster pace than sometimes insurance markets can keep up with.

It’s important to note that these are modelled loss scenarios, but they do give a good approximation of the exposure that the reinsurance, catastrophe bonds and insurance-linked securities (ILS) market would face, should a storm the size of hurricane Andrew threaten Florida today.

The exact-replica of hurricane Andrew today would likely cause a significant loss for the catastrophe bond and insurance-linked securities (ILS) market, with numerous collateralized reinsurance structures and cat bonds making payouts to ceding companies, as you would expect from any industry loss of that magnitude.

But the near-replica, at the most extreme end of the modelled loss scenarios of $180 billion, could wipe out a significant chunk of the over $90 billion of alternative and ILS capital in the reinsurance market. In fact, such a severe storm could see the majority of Florida hurricane exposed catastrophe bonds paying out at least some of their principal, or defaulting completely.

Of course this is exactly as designed, with the cat bond and ILS market largely a provider of property catastrophe reinsurance and retrocession capacity tuned to respond to just these kinds of scenario events.

With the 25th anniversary of hurricane Andrew approaching, the storm’s devastating impact to property, lives and livelihoods should provide a reminder that really major losses are possible due to U.S. hurricanes and that the insurance industry has work to do, even in its heartland, to provide more protection to the population and economy.